Guzman for Aurora: The Parade 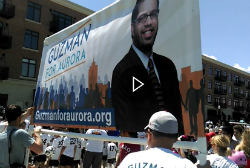 The short VIDEO below shows highlights from the Guzman for Aurora contingent marching in Aurora’s Memorial Day Parade.  At the end of this post look for details about joining us for the next parade: the July 4th parade.

The support for Rick Guzman’s run for Aurora mayor was overwhelming on Memorial Day: around 200 people marched, making it the parade’s largest group.  Check out how surprised even the parade’s announcer was.  “You guys roll deep,” he said.  “I thought this was two units, but this is all Guzman for Aurora they tell me!” And he kept being surprised.  As the group was finally all passing by, he spotted Rick’s wife and yelled, “Desiree, you guys really roll deep!”

But success doesn’t allow you to sit back.  “The pressure’s on now,” Rick said.  “The other candidates realize how much they have to step it up—so now we do too.”

Go to the Guzman for Aurora website to learn more about Rick’s candidacy, and go HERE to learn more about it on this site and be linked to a highlights VIDEO from Rick’s Kickoff Rally held in late April.  It’s very short and shows a leading community activist, an appellate court judge, former fire and police chiefs, and the president of the Real Estate Association making persuasive cases for why Rick Guzman deserves your vote.

Then help us step up our game by marching with us in the July 4th parade!  Here’s the plan:

1) The parade steps off at 10:00 a.m. on the 4th, so please plan to be there around 9:00 a.m.  Right now our group is #70 of about 100 contingents.
2) Park at the new Aurora Public Library, 101 S. River St., in or near the large gravel parking lot.
3) Meet us on River St. just south of the library and just south of Jimmie Johns.  The weather’s supposed to be nice, but visors, hats, sunscreen, and water might be good.
4) There will be about 100 Guzman for Aurora t-shirts. That took care of only half of us last time, however, so this time there will also be signs, paddles and other fun things to identify our group—plus if you can wear a white shirt, that will help too.

One Response to Guzman for Aurora: The Parade