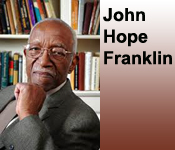 The sound of his name says a lot: John Hope Franklin. One of America’s greatest historians and black writers, his books and life gave direction to so much social change.  John Hope Franklin (1914-2009) taught at the University of Chicago from 1964 to 1982, chairing the history department (1967-70), and serving as the John Matthew Manly Distinguished Service Professor until retiring and moving to Duke University to found the John Hope Franklin Center for Interdisciplinary and International Studies, which opened in 2000.  Among his classic works are From Slavery to Freedom: A History of African-Americans, and Reconstruction After the Civil War.  Race and History collected major essays from 1938 to 1988.

He served as president of at least five major history associations, including the American Historical Association, and sat on the boards of the Chicago Public 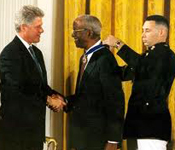 Library and Chicago Symphony.  Recipient of over 100 honorary degrees and many prizes, including the W.E.B. DuBois Award, Dr. Franklin also served on President Clinton’s Race Advisory Panel. President Clinton also awarded him the Presidential Medal of Freedom.  Yet all these distinctions never dulled his sense of the tenuous “citizenship” accorded African-Americans.  After a famous 1995 incident in which a hotel patron took him for a parking valet, he marveled again at how at any age any Black man could still be perceived as a boy.  He was 81 at the time.

One of my treasures is a letter he sent me encouraging my project of putting together the first comprehensive anthology of black writing from Chicago and allowing me to use some of his work.  The excerpt I chose to include in Black Writing from Chicago: In the World, Not of It? comes from the Jefferson Lectures which he delivered for the U.S. Bicentennial in three cities, including Chicago.  Published as Racial Equality in America, it won the Clarence Holte Literary Prize.  In this essay he asks the question that has probably driven every social change movement:  is equality divisible—can some have it and others not, or is equality indivisible, a right for everyone?  A movement for positive social change may be as sweeping and world-changing as the Civil Rights Movement, or a small movement addressing the situation of just a few, but it will gain its force and inspiration if–as John Hope Franklin believed–it believes in the latter: that equality is truly indivisible, everyone’s right.  That’s a fighting belief in a world where so many people and social forces try to create as much inequality as possible.

√ Go to a List of Black Writers written about on this site, OR the Teaching Diversity main page.