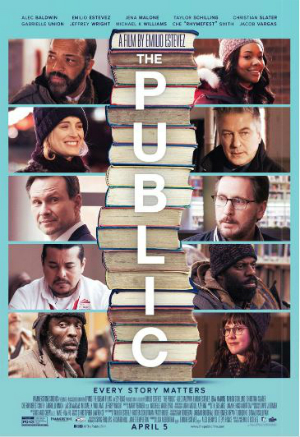 The VIDEO below shows a couple of minutes of a sneak preview we attended for the movie The Public on March 18, 2019.  It featured a wonderful Q&A with Emilio Esteves, where he explains the connection between public libraries and homelessness.  It hits theaters April 5th.  Here’s my review:

There’s a scene in The Public—a new film about homelessness and public libraries written, directed, and starring Emilio Esteves—where a homeless man, buck naked, stands in front of big windows belting out Johnny Nash’s “I Can See Clearly Now.”  Myra, a librarian played by Gena Malone, turns to the head supervisor, Stuart Goodson, played by Esteves, and says, “Are you going to do something about this?  Because he’s really ruining the song for me.” That nakedness and that song return in a big way near the end of the film, and Myra’s quip captures a lot of the feel of this movie.  At first, that feel confused me.

One knock on The Public is that it’s a bit slick: it pushes all the right movie buttons, pleasing the crowd in all the right ways, and some have said it presents too simplistic a view of homelessness.  I myself would just say the movie is very well crafted, even if a bit too smooth, too well fitted together.  And it’s funny. That’s what most confused me at first.  I’ve seen a few movies on homelessness and most are pretty dire.  The Public felt light, clever, full of good feeling.  It’s entertaining.  I imagine that’s why some have called it simplistic. That’s not to say there weren’t darker moments, but the light and dark were balanced in a way we don’t usually think about homelessness, a world we see as irretrievably skewed and unbalanced.  Then I suddenly realized The Public was reflecting what I myself have felt in more than 30 years volunteering in homeless shelters. A homeless shelter holds many tragic stories, it’s true—stories of bad choices, mental illness, addiction, tough, tough, tough breaks—but so many  people there are also incredibly smart, knowing, and very, very funny.  You’re both brought down by the weight of terrible consequences, and also lifted up by the sheer light of human resilience.  The Public captures this range of darkness to light, tragedy to comedy, better than any film on homelessness I’ve seen.  It presents a range of homeless people, too, and it gives them a voice.

And everything doesn’t fit together smoothly.  The storyline of Detective Ramstead (played by Alec Baldwin) and his son, whom he suspects has joined the ranks of the homeless, seems ragged, and the emotions of it seem poorly motivated.  Perhaps more scenes were shot that would have explained it better, but these wound up on the cutting room floor for the sake of movie time limits.  But outside the world of film what really doesn’t fit is the fact of homelessness itself.  In the richest country in the world, if we take the full spectrum of homelessness into consideration, there are millions without a true home—1.5 million of them being children, a fact that pushes the average age for a homeless person in the United States down to around ten years old.

The Public is a good movie.  As the poster above shows, it’s a Hollywood film acted by some of America’s most prominent, popular stars, and Esteves is particularly good.  Let’s hope that all this star power—and, again, the fact that it’s very entertaining—will hold our attention long enough so we can have a hard  look at homelessness and some ways we can begin curbing this blight.

♦ I coordinate the homeless shelter program of Friendship United Methodist Church, Bolingbrook, IL.  We serve at Daybreak Shelter in Joliet.  Check the service dates and come join us.

♦ Go to a list of Reviews on this site.