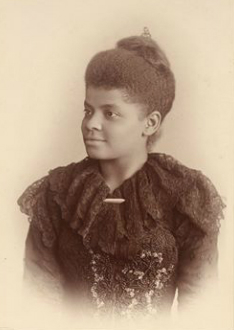 One of the most important documents of Black writing in American history is Ida B. Well’s pamphlet The Reason Why the Colored American Is Not in the World’s Columbian Exposition, sections of which I included in my book Black Writing from Chicago.  It begins:

“The exhibit of the progress made by a race in 25 years of freedom as against 250 years of slavery, would have been the greatest tribute to the greatness and progressiveness of American institutions which could have been shown the world. The colored people of this great Republic number eight millions—more than one-tenth the whole population of the United States. They were among the earliest settlers of this continent, landing at Jamestown, Virginia in 1619 in a slave ship, before the Puritans, who landed at Plymouth in 1620. They have contributed a large share to American prosperity and civilization. The labor of one-half of this country has always been, and is still being done by them. The first credit this country had in its commerce with foreign nations was created by productions resulting from their labor. The wealth created by their industry has afforded to the white people of this country the leisure essential to their great progress in education, art, science, industry and invention.

“Those visitors to the World’s Columbian Exposition who know these facts, especially foreigners will naturally ask: Why are not the colored people, who constitute so large an element of the American population, and who have contributed so large a share to American greatness, more visibly present and better represented in this World’s Exposition?” 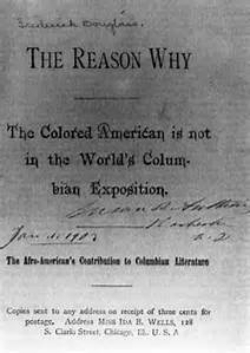 Born into slavery in 1862, Ida B. Wells (1862-1931) first gained national attention in 1887 when she sued the Chesapeake and Ohio Railroad for not allowing her to sit with whites.  The case, which she lost, drew her away from school teaching in Memphis and into a career in journalism and crusading for Black rights that is among the most important in American history.  She helped establish the African-American newspaper The Free Speech in Memphis in 1891, and the following year the death by lynch mob of several of her friends impelled her to begin her famous international campaign against lynching.

It wasn’t just a protest against the poor representation of African Americans in virtually every aspect of this particular World’s Fair, from jobs to hurtful stereotypes.  The Reason Why pamphlet also placed these injustices against a sweeping backdrop of America’s history of injustice against blacks.  In Chapter 2, “Class Legislation,” for example, Wells details the systematic impoverishment and disenfranchisement of blacks.  “Russia’s liberated serf,” she writes, “was given three acres  of land and agricultural implements,” but blacks “were turned loose to starvation, destitution, and death….”  Poll taxes and unfair “education” tests stymied black attempts to vote, creating a “Solid South”—meaning, she says, a solid unit “for white supremacy.” The result in Mississippi was that in 1892 while there were 110,100 whites over 21 and eligible to vote and 147,205 blacks similarly eligible, 68,127 whites were registered but only 8,615 blacks.  In Chapter 3, “The Convict Lease System,” she links this impoverishment and disenfranchisement not only to the excessive numbers of blacks thrown in jail—a problem still rampant in the first quarter of the 21st century—but also to a de facto reinstatement of slavery, with convicts being “leased out to work for railway contractors, mining companies and those who farm large plantations.”

In Chapter 4, she turns to “Lynch Law.”  Between 1882 and 1891, 701 lynchings were officially recorded.  Of these 269 blacks were accused of rape, though, says Wells, “This crime is only so punished when white women accuse black men, which accusation is never proven. The same crime committed by Negroes against Negroes, or by white men against black women is ignored even in the law courts.”  The list of “reasons” concludes with 32 blacks lynched for no reason whatever.

♦  Go to a list of Black Writers on this site, and to the Black Writing from Chicago main page, where you can learn more and buy the book.

This entry was posted in Black Writers, Chicago Writing, Social Change and tagged 1893 World's Fair, Black Writing from Chicago: In the World-Not of It?, convict least system, Ida B. Wells, lynching, The Reason Why the Colored American Is Not in the World's Columbian Exposition. Bookmark the permalink.

One Response to Ida B. Wells Boycotts the World’s Fair – Part 1