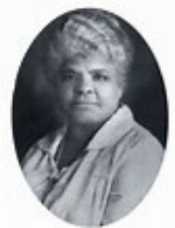 Chicago eventually became Ida B. Well’s home base.  What drew her here, away from her significant writing and crusading in Memphis, was controversy over the “White City” of the 1893 World’s Fair.  Blacks were being poorly represented in virtually all aspects of the fair, from woeful underemployment to insulting, stereotypical exhibits featuring watermelon and Aunt Jemima.  Controversy focused on whether Blacks should actually attend a “Colored People’s Day” proposed for August 25th.  Wells and many other Black leaders opposed attendance, and Wells spear-headed a drive to publish the pamphlet titled The Reason Why the Colored American Is Not in the World’s Columbian Exposition, portions of which I included in my book Black Writing from Chicago. 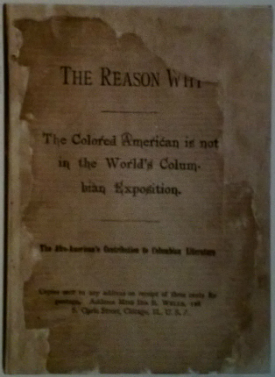 After the rigors of raising sufficient funds for publication, enormous local and national debate on the project’s merit in the first place, and many complicated intrigues—mainly concerning whether the venerable Frederic Douglass would or would not participate in the boycott and in the pamphlet’s writing—The Reason Why finally did appear…and on time, too, though Wells had to scrap several ideas for it, including publishing it in several languages.  She had time only to print French and German translations of her preface.  The pamphlet included Wells’ preface and her essays on class legislation, the convict lease system, and lynching.  (See Part 1 of this post for short comments and examples of these chapters.)

Finally, Douglass did contribute an impassioned introduction.  I. Garland Penn wrote on “The Progress of the Afro-Americans Since Emancipation.”  Then it was left to Ferdinand L. Barnett to give “The Reason Why.” A Chicago lawyer who had started the black newspaper The Conservator, and who was one of the original leaders of the opposition to segregated exhibits, he and Ida B. Wells fell in love during the course of these World Fair struggles and married in 1895.  Here is what her future husband wrote at the pamphlet’s conclusion: 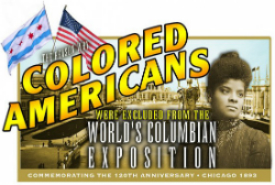 “In consideration of the color-proof character of the Exposition Management it was the refinement of irony to set aside August 25th to be observed as ‘Colored People’s Day.’  In his wonderful hive of National industry, representing an outlay of thirty million dollars, and numbering its employees in the thousands, only two colored persons could be found who occupations were of higher grade than that of janitor, laborer and porter, and these two only clerkships.  Only as a menial is the Colored American to be seen—the Nation’s deliberate and cowardly tribute to the Southern demand ‘to keep the Negro in his place.’  .…it remained for the Republic of Hayti [sic] to give the only acceptable representation enjoyed by us as the Fair.  That republic chose Frederick Douglass to represent it as Commissioner through which the Colored American received from a foreign power the place denied him at home….The World’s Columbian Exposition draws to a close and that which has been done is without remedy.  The colored people have no vindictiveness actuating them in this presentation of their side of this question, our only desire being to tell the reason why we have no part nor lot in the Exposition.  Our failure to be represented is not of our own working and we can only hope that the spirit of freedom and fair play of which some Americans so loudly boast, will so inspire the Nation that in another great National endeavor the Colored American shall not plead for a place in vain.”

The actual status of black participation in the fair, the success of Colored American Day, and of the pamphlet itself  remain controversial, and Wells herself is said to have admitted to Douglass that her youth might have caused her to over react.  Nonetheless, The Reason Why remains a landmark in Black writing.

♦  Go to a list of Black Writers on this site, and to the main page for Black Writing from Chicago.