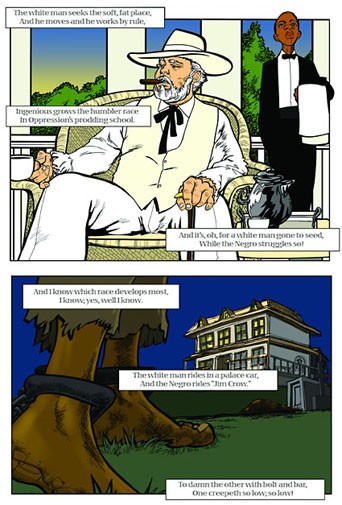 As a young man James David Corrothers (1869-1917) entered the ministry and stayed in it his whole life.  He also wrote poetry and in his day was, among Black poets, second in popularity only to Paul Laurence Dunbar.  Like Dunbar he wrote many popular dialect poems, most notably “An Indignation Dinner,” and, like Dunbar, several classic poems about Blacks, whites, and racial injustice.  At left is a panel from the Graphic Classics series, Volume 22: African-American Classics—Great Stories and Poems from America’s Earliest Black Writers, illustrating Corrother’s poem “In the Matter of Two Men.” Corrothers says that because the white man “seeks the soft, fat place,” the black man grows stronger as he works and studies so hard.  Because of this Corrothers says, “I know which man must win at last, / I know!  Ah, Friend, I know!”  Such confidence was matched by a keen sense of injustice, as in his most quoted poem “At the Closed Gate of Justice,” which I included in my book Black Writing from Chicago.  It begins:

The next two stanzas name other things that being “a Negro in a day like this” demands: “rare patience” and “strange loyalty.”  The next, and final, stanza has the speaker passing by the still-closed gate of justice.  It shines with gold and amethyst, but remains a “goal unwon.” 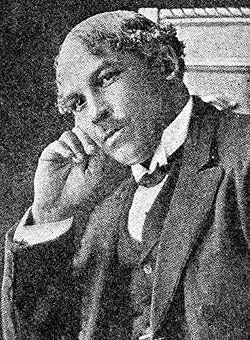 Besides two books of poetry (the 1907 Selected Poems, and the 1914 The Dream and the Song), Corrothers published an autobiography, In Spite of Handicap, in 1916.  The handicap was race, of course, but also more complicated than that.  No less than W.E.B. DuBois wrote in his obituary for Corrothers that he was “a man whom not only white people, but the colored people themselves did much to deprive of a real chance; yet he made his rugged way.”  DuBois pronounced Corrothers’ passing as, “A serious loss to the race and to literature.”

In his autobiography Corrothers speaks disparagingly about what is for me perhaps his most interesting book, The Black Cat Club, a collection of humorous sketches which originally appeared in Chicago newspapers.  He says he regrets its publication, which he allowed only because “expenses had to be met.”  The fictional club met to read poems and discuss issues of the day, and in Black Writing from Chicago I included an excerpt of “De Eddicated Cullud,” which satirizes the pretenses of the educated.  The Black Cat Club shows yet another side Corrothers’ wide-ranging, sometimes contradictory, output.  While “In the Matter of Two Men” valorizes education, “De Eddicated Cullud” seems to ridicule it.  As the title suggests, it was also written in dialect, making the insult to education even more intense.  Yet in many ways Corrothers was seeking to put education in its place, to warn the race that it needed more than a diploma.  It needed to sharpen its street smarts.  It needed financial power.

“It don’t do no good foh to ‘buse de Southern white folks; an’ to tell ‘em whut God’s goin’ to do to ‘em ef dey don’t stop lynchin’ de niggahs,” begins the most crucial section of the piece.  “Dat only makes ‘em mad.  De thaing foh to do is to be a genamun an’ git yo’ pocket full o’ check books, fust mo’gages an’ cash.

For sure Corrothers proposes a vision of self-sufficiency that has deep roots in the Black struggle to protect itself from the white world.  Owning properties and businesses would become a major goal of Blacks in the years to come, and it remains a vital goal today when ownership has often dropped in many areas of the country.  In 2007 I was invited to the great Haki Maddhubuti’s 65th birthday party.  As he rose to address us, his first words were: “We own this place.  Can’t nobody throw us out.”  The American Quarterly published an essay on Corrothers by Princeton’s Kevin Gaines in its September 1993 issue.  The title makes reference to Corrothers’ dialect writing, but also sums up the importance of Corrothers and his vision of a truly free black future: “Assimilationist Minstrelsy as Racial Uplift Ideology: James D. Corrothers’ Literary Quest for Black Leadership.”

♦ Go to a list of Black Writers written about on this site, and/or the Teaching Diversity main page.