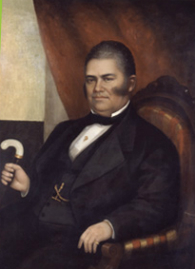 Born in Greene County, North Carolina, around 1816, John Jones moved to Chicago in 1845 and established a tailor shop which had many wealthy, white Chicago customers.  By the 1870’s it made him perhaps the wealthiest black in the Midwest.  But Jones is best known as the author of the pamphlet The Black Laws of Illinois, portions of which I presented in my book Black Writing from Chicago.  The pamphlet was only part of his tireless crusade against laws which, among other things, prohibited blacks from testifying in courts and purchasing property.  Jones became the first black to hold elected office in the state when, in 1872, he was elected to a three-year term on the Cook County Board of Commissioners.  In a 1905 letter to the Illinois Historical Society concerning the 1875 celebration of Jones’ 30 years in Chicago, his daughter Mrs. L.J. Lee says that, “The whole life of Mr. Jones has been spent in devotion to the welfare of his race….”  For example, he was “instrumental in sending hundreds of fugitives to Canada on the day after the signing of the Fugitive Slave law…,” but he regarded “none of his labors…with more satisfaction than his warfare upon the Black Laws of this State….”  Jones died on May 27, 1879, and is buried in Graceland Cemetery, Chicago’s most famous resting place. 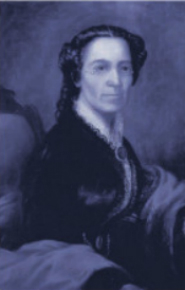 Mention should also be made of his wife, Mary Jones.  In 1955 their granddaughter, Theodora Lee Purnell, wrote to the Illinois Historical Society, Chicago, noting that the Society has an oil painting of her grandfather. “I have,” she writes, “ the mate of this portrait, an oil painting of Mary Jones…which was painted at the same sitting…They belong together.”  She continues:

“My Grand-mother, Mary Jones was at his side in his every endeavor and accomplishment as a citizen of the United States, the State of Illinois and Chicago in particular….

“In her own field she made Chicago history.

“She was mistress of the home where Nathan Freer, John Brown, Frederick Douglass and Allen Pinckerton visited.  She harbored and fed the fugitive slaves that these men brought to her door…In fact she stood at my Grand-father’s side…when their early Chicago home became one of the Underground Railway Stations….

“She was a pioneer in the…Suffrage Movement and was hostess to Susan B. Anthony, Carrie Chatman Catt, Emma Chandler and Mrs. John Brown.

Mrs. Purnell was then 84 years old and seeking assurance that history would be remembered more fully. In the excerpts from The Black Laws I included in Black Writing from Chicago, I sought most to convey John Jones’ argument for reading history more fully—black and white entwined—as if black history is American history itself.

The Black Laws was a 16-page pamphlet published by the Tribune book company in 1864.  I included several important passages of Jones’ text, tying them together with my summaries of omitted parts.  The pamphlet’s rhetoric presents humble appeals to the people of Illinois, but draws near its end more forcefully:  “God being our helper, we plan to remain on American soil with you.  When you are in peace and prosperity, we rejoice; and when you are in trouble and adversity, we are sad.  And this notwithstanding, proscription follows us in the school-house , and, indeed, drives us out; follows us to church, in the lecture room, in the concert-hall, the theatre…follows us to the grave;—for I assure you, fellow citizens, that today a colored man cannot buy a burying lot in the city of Chicago for his own use.”

Then I presented some sections of a speech Jones delivered in 1872.  Also published as a pamphlet, it consisted of much of the same material and, in many ways, represents a more rousing expression of the heart of the original pamphlet, most of which was a section by section rebuttal of the Black Laws.  In the “speech pamphlet” Jones extends his plea to read history more fully into a call to vote the right people into office.  In those days—in what sounds so ironic to us today—that meant, to Jones, the Republican Party.  “My colored countrymen,” Jones intones near the end of his speech, “the Republican Party has lifted us up from the degradation of slavery and put us upon an equal footing with themselves…and to that party we, in my judgment, ought to cast our first vote, and God being my helper I mean to vote for its candidates in November.”

Today there are few formal “Black Laws,” but an informal structure of “Black Laws” is still strongly in force in most places in the United States.

♦  Go to a list of Black Writers on this site, and the Black Writing from Chicago page, where you can also BUY the book.