Just Another Item to Add to a White Privilege Perks List

In 1989 Peggy McIntosh of Wellesley University published “White Privilege: Unpacking the Invisible Knapsack,” one of the most consequential essays of our time, an essay which has grown even more central during our recent racial crises.  She packs a lot of theory and context into its mere five pages—something lots of people skip over in favor of its most famous feature: a list of 26 items whites can do or don’t have to think about much, but people of color can’t do or have to think about an awful lot.  These range from the seemingly “small,” like #26 (“I can choose blemish cover or bandages in ‘flesh’ color and have them more less match my skin”), to large cultural issues like #6 (who made our national heritage or civilization what it is), to being stopped by police or harassed while shopping (#’s 19 and 4), to being able to live where you’d like (#’s 2 and 3), and, one of the most moving, #11: “I can arrange to protect my children most of the time from people who might not like them.”  Go HERE for my more detailed take on the essay, plus a link to its most recent official version. 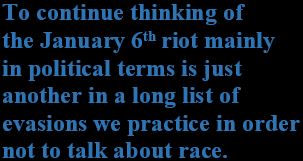 It’s been pirated a lot, added to, subtracted from.  When I first encountered it decades ago, there were 50 items in its famous list. The list made the concepts of white privilege and white supremacy more understandable to the general public, so much so that the first, white privilege, has become a bona fide industry. There are hundreds of websites, Facebook groups, books and articles and workshops dedicated to helping people learn about what it is and how it can be dismantled or turned into something that can help fight racism.  Many of these start with McIntosh’s essay or pay homage to it.  It’s also spawned dozens and dozens of other lists from different points of view: from how white privilege gives whites a huge advantage working in theater to having and raising children (see the graphic below).

I have another item to add to some appropriate list somewhere, but first a word about what white privilege doesn’t mean. 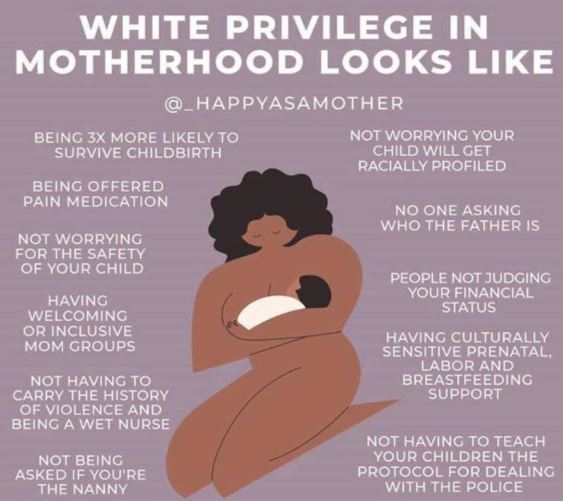 It doesn’t mean that all whites didn’t work hard for what they have.  It doesn’t mean they have never experienced poverty or the lack of healthcare or being food insecure. Rebecca Fraley, a co-panelist with me at a racism conference in February 2020, explains this in more detail.  She also explains what it does mean: that there’s systematic racism in our society that blocks people of color, especially American blacks, from having equal chances at good jobs they can work hard at, achieve at, feel secure at. It makes it so that for a large portion of them, the police are not a source of security but persecution. Which brings me to the item I know a lot of people have already added to some white privilege perks list somewhere.

“I can announce openly that I am going to try to obstruct or overthrow the government, be joined by thousands of people who say the same, then actually march into the Capitol of the United States of American with them, trash it, and encounter fairly little resistance while doing it.”

It’s not that the authorities didn’t have the rioters’ intentions stated right to their faces. It’s not that they had not heard the voices in many branches of U.S. intelligence say that white supremacy extremists were the single greatest terrorist danger to our counter.  They heard and saw all this clearly, but gave those overwhelmingly white rioters the privilege of the doubt. It was white privilege working full steam ahead. 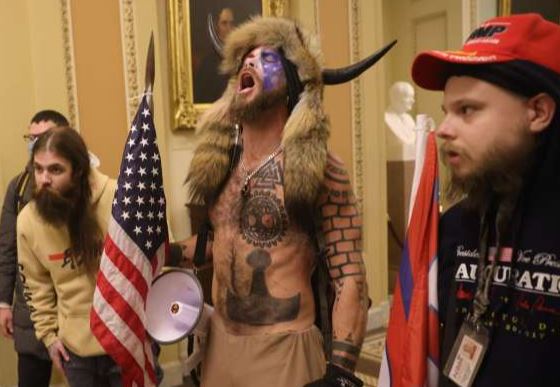 By now millions of people have noticed the stark difference between how the Black Lives Matter protests in Washington were handled versus the Capitol riot on January 6, 2021. Millions know that if January 6th had seen a group largely of people of color— even a peaceful group—the treatment would have been radically different. There are those, of course, who show a lack of ability to understand the difference between those January 6th rioters and the riots that occasionally broke out during the racial protests following the death of George Floyd, violence that Black Lives Matter did not start, violence that showed in less than 10% of protests.  We’ll leave that whole illogic for another time. The treatment of the January 6th rioters vs. the two protests against racism that occurred shortly before that should be stark enough for anyone. In one instance, peaceful BLM protesters with no intent to storm the Capitol or White House were tear gassed and sent flying so that then President Trump could march to a nearby church for a photo op at which he held up the Bible…upside down.

But it will continue not to be a clear, stark contrast for thousands, not primarily because they see the riot as a protest against an election that they continue to believe was stolen—though there has not been one shred of credible evidence presented. That’s merely a case of leaders lying to their followers and their followers being desperate enough to believe. At the deepest level what the January 6th riot was about was not trying to hang on to their guy, but trying to hang on to white supremacy.  To continue thinking of the January 6th riot mainly in political terms is just another in a long list of evasions we practice in order not to talk about race.  Call it “white fragility” or whatever, Americans would rather talk about anything else—anything—but that.

♦  Watch the Vox Video Lab short film “When White Supremacists Overthrew a Government,” part of Vox producer Ranjani Chakraborty’s series “Missing Chapter.”  “In November 1898, in Wilmington, North Carolina,” the video’s description reads, “a mob of 2,000 white men expelled black and white political leaders, destroyed the property of the city’s black residents, and killed dozens–if not hundreds–of people…For decades, the story of this violence was buried, while the perpetrators were cast as heroes. Yet its impacts resonate across the state to this day.”  Not just the state, but these resonances have traveled more than 122 years across time to Washington, DC, January 6, 2021.  Also read my “Voter Suppression 21st Century Style,” which tells that on July 29, 2016, a three-judge panel for the United States Court of Appeals for the Fourth District struck down North Carolina’s Voter ID law, passed earlier in April that year, saying that it “targeted African-Americans with almost surgical precision.”  Not a bloody riot, but another resonance 0f white supremacy’s attacks on democracy.