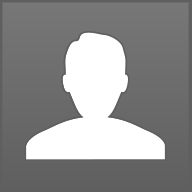 Ken Green (b. 1964) used to be a graphic artist for the Department of Children and Family Services in Chicago, and was perhaps the funniest slam poet on the Chicago scene, until…(see below). Though he was not the youngest writer in my book Black Writing from Chicago, I ended it with him because few could follow him, especially on stage.  “I have,” Green says, “written serious stuff that I am saving for a special occasion, like my anticipated posthumous best-seller.” A member of three National Poetry Slam teams (for the Green Mill in 1999 and 2003, and Wicker Park in 2002), he has performed at many venues around the Chicago area and, he says, has “even been permitted to transport…poetry across state lines.”  In 2002 he placed second in the Austin International Poetry Festival.  Though humor is the hallmark of his writing and performing, audiences also know the seriousness of Green’s commentary, whether his subject is heavy—the gunning down of Amadu Diallo by New York police, for example—or lighter, like “cure-all pills with side effects…worse than the original ailment.”  He has published a chapbook entitled Ken Green’s Good Poems, which does little to dispel the rumor that he does, indeed, own Kiss albums, as he admits in the poem “One Man Parade,” about a parade populated by all the Chicago black men he knows named Ken Green: exactly one.  “Look, here come the African American men named Ken Green who are reluctant to admit they own more than four Kiss albums…”

“Of course, there were those among the throng
who opposed my lifestyle,
whose very looks hissed
and saw my presence
as undermining the thinning moral fabric of society.

“Ken Green should not be allowed to adopt
under any circumstances”

“The Bible clearly states that Ken Green
is an abomination in the eyes of the Lord.”

What blacks are or aren’t supposed to do—like own Kiss albums—is often the subject of his poems, but the poem “Debate” is about what nobody is supposed to do:

“When debating the existence of God
with a grizzly bear,
whatever you do
do NOT mention Nietzsche.”

He goes on to offer advice on debating other animals—alligators, lowland gorillas:

But by far the most dangerous exchanges are with humans:  “When discussing anything with a human being,” Green counsels, “keep your arms inside the vehicle at all times.”

When I had him read for me at the Congress Hotel during an international conference I was directing, he said, “Hey, what am I doing in a room like this?  I usually read down the street at Weeds.”  My wife and I have never been to Weeds, but Ken Green may be her favorite poet. When I finally said Yes to doing Black Writing from Chicago, her first questions was, “So how many Ken Green poems are you going to use?”  Two.  I had room enough for just “Debate” and “One Man Parade.”  I regret that as much as I regret any of the many other pieces, Green’s or otherwise, I didn’t have room for. 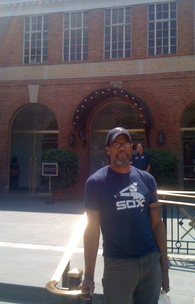 I used to wish I had an actual picture of Ken Green to go along with this post.  We’ve met several times and even shared a stage, but the generic blank picture form—whose outlines don’t resemble Ken’s in the slightest—seemed somehow appropriate, and I used it at the beginning of this post even though now I actually do have a picture.  It’s at left with the ugly details below.

Ken Green has deserted Chicago.  He’s become a cultural star in…Boston, and the picture shows him outside some Boston building, I guess.  Various Boston websites say things like, “Ken Green brought Story Club to Boston in 2013…Ken started off in the poetry slam scene, becoming a member of four Chicago teams to compete in the National Poetry Slam,” one more than I reported above when I first wrote this intro.  Ken Green, they say, “Turned his attention to fiction and essays writing several years ago, as well as playwriting.”  (Indeed, in 2006 he placed third in the Goodman Theater’s David Mamet Write-Alike Contest with a somewhat profane, Mametized version of The Wizard of Oz.)  They say, “He is a lifelong Chicago White Sox fan who finds his baseball patience being tested living in Boston.”  What?  Nobody out-patiences Chicago fans.

Dana Norris founded Story Club in Chicago in 2009, wanting to mix the spontaneity of an open mic with the experience of live theater.  It has drawn performers as various as history professors, New York Times bestselling authors, members of an all-girl Beastie Boys cover band—and now Ken Green, who will always be Chicago’s own, no matter what the White Sox do.

♦  Go to a list of Black Writers on this site, and the Black Writing from Chicago page, where you can also BUY the book.

♦  Go to the Teaching Diversity main page, or the Poetry main page.