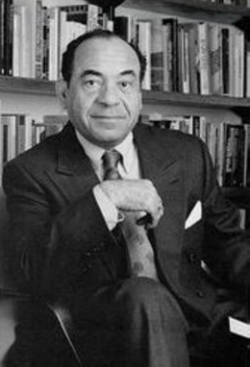 In the Afterword to my book Black Writing from Chicago, the first person I apologize for not including is Leon Forrest.  I wrote: “First and foremost, I will immediately agree with anyone who believes omitting Leon Forrest is unforgivable.  Chair of African-American Studies at Northwestern from 1985 to 1992, he authored four celebrated novels: There Is A Tree More Ancient than Eden (1973), The Bloodworth Orphans (1977), Two Wings to Veil My Face (1984), and the monumental, 1132-page Divine Days (1992).  I tried to create a montage of passages centered on the mythic Sugar Grove character in Divine Days, finally admitting to myself that even 30 pages could not adequately convey the deep, quickly flowing multi-levels of a style so thick with myth and allusion.  Its book jacket accurately dubs Divine Days a “Ulysses of the South Side,” and, indeed, the novel opens with quotes from Homer, the Gospel of John, Joyce, and Dostoevsky.  A 1993 issue of Callaloo was devoted to essays on Forrest’s four novels.  I also recommend Relocations of the Spirit (1994) a collection of his essays, mostly on life in Chicago.”

I was, however, able to include an essay from Relocations of the Spirit—“Souls in Motion”—in a previous book, Smokestacks and Skyscrapers (1999), which I co-edited with my friend David Starkey.  There I wrote, in part:  “Born in Chicago, Leon Forrest [1937-1997] was long associated with Northwestern University’s African American Studies program, and gained an almost reverential following for his dedication to, research in and contributions to black culture in the Chicago area and throughout the nation…Harvard University professor Henry Louis Gates, Jr., referred to [Divine Days] as the War and Peace of African American Literature.  Forrest’s fusion of American myth, autobiography, black history, and religious doctrine and obsession creates an almost too-rich palette of shifting scenes, overlapping selves, and multi-voiced meditations not dissimilar to two other writers to whom he has sometimes been compared: James Joyce and William Faulkner….” 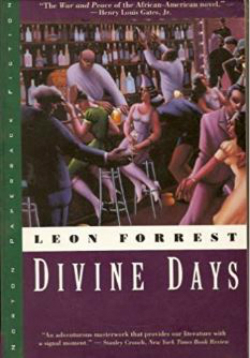 I chose the essay “Souls in Motion” for Smokestacks and Skyscrapers as a way to get to Forrest’s own obsession with the “divine day,” Sunday.  Much of the piece takes up this divine day at several Southside Chicago churches:  West Point Baptist, Mount Pisgah, First Church of Deliverance, Christian Tabernacle, and more.  He wonders over the artistry of the pastors, the titanic structure of the black sermon, the interplay of pastor and choir, the Word and the music, winding up at Antioch Missionary Baptist where he witnesses a rendition of “Move Mountain,” a song floating through the essay like a refrain and a witness to the mountains black people have had to move.  The soloist, Paula Williams, “…puts power behind the phrases that celebrate the will of the individual—not only those that honor spiritual fiber but also the lines rooted in the secular ruggedness of grit and guts.  Now I know what the old folks meant when they told me that to make it in life you needed ‘grit, shit, and mother wit’.”  It is close to Christmas, and later that Sunday, in a calmer mood now, Forrest feels “a renewal of faith and intellect” as he reflects on the Pastor’s “anchoring interpretation for all of us who must stand alone before that mountain of ascendancy.”

That ends the piece, but what I remember most, and Forrest, too, calls a “memorable exchange” is his conversation, quoted at length, with Rev. Morris Harrison Tynes, pastor of Greater Mount Moriah Baptist, a man “…who believes all things happen for a deeper purpose.” 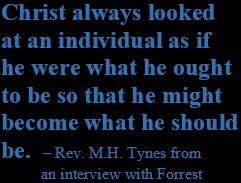 The conversation turns to a tragic Chicago incident: the murder of high school basketball star Ben Wilson by three young black men, an incident that still resonates with shock throughout the city 35 years later.  You could look at those three, says Tynes, in two ways: as misguided children of God needing sympathy, love, and forgiveness; or as people who just need to be strung up.  But there is a third way.  “…I believe the finality of death,” he says, “would be to them a blessing. They would be released from the agonizing shame and frustration that they will have to go through for the rest of their lives.  As they get older they will see the dimension of what they’ve done, more than they do now in their little 19-and-20-year-old minds.  And if they are in prison they are going to have a long time to think about their deeds.  And the awesome dimension of that may turn them into saints.”  Perhaps.  But here Forrest does what’s typical for him.  He puts us before words that loom like a mountain—hard, mysterious, inviting us to move them, ascend them, perhaps even cross over them somehow.

♦  Go to a list of Black Writers written about on this site, and to the Teaching Diversity page.

This entry was posted in Black Writers, Writing and tagged Ben Wilson, Black Writing from Chicago: In the World-Not of It?, Divine Days, Leon Forrest, Smokestacks and Skyscrapers: An Anthology of Chicago Writing. Bookmark the permalink.