Lerone Bennett, Jr.: Before the Mayflower

Posted on November 3, 2015 by Richard Guzman 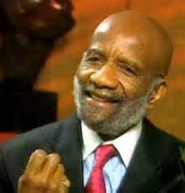 Born in iconic Clarksdale, Mississippi, October 17, 1928, Lerone Bennett, Jr., came to Chicago in 1953 to become associate editor of Jet magazine, then associate and senior editor at Ebony starting in 1954.  He has also been a visiting professor of history at Northwestern, senior fellow of the Institute of the Black World, and member of the board of directors of the Chicago Public Library.  Author of many articles, short stories, and poems, he became a mainstay of Chicago’s Johnson Publishing Co., writing ten books for them, including Pioneers in Protest (1968), and The Challenge of Blackness (1972).  Hailed as one of the country’s best popular historians, he has played an enormous role in conveying the power of the Black presence in American history, as well as showing the way to better communications not only between Blacks and whites, but between Blacks and their own constituencies, as he did in Confrontation: Black and White (1965). 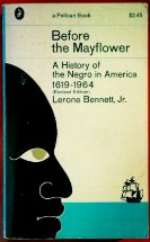 His most influential book has been Before the Mayflower, first published in 1962. In Chapter 3, “‘The Founding of Black America,” Bennett tells the story of the crucial role black patriots played in the American Revolution, including the legendary Crispus Attucks, who, as the first person to die in the Revolution, has been a source of immense pride for black Americans.  He distinguishes four “recognizable types” in the founding of black America: Jupiter Hammon, who “went over to the enemy…producing intellectual products that…buttressed their world view;” Phillis Wheatley, a founder of American poetry, who “subtly challenged” the premises of American society “by the authority of her work;” the anonymous Othello, the outright militant; and Richard Allen who “spoke in muted tones but created big sticks of organization,” including the AME Church and, with Absalom Jones, the Free African Society.

In my book Black Writing from Chicago I included an excerpt from the end of Chapter 3 of Before the Mayflower, which begins by focusing on Allen and moves on to John Baptiste Pointe Du Sable, the founder of Chicago.  Black protesters withdrawing from the white Methodist Church debated what to do next: whom to be affiliated with, whether to go it alone, etc.  “Behind this debate,” writes Bennett, “was another question: What relation, if any, should blacks have with white institutions?”  Questions like this formed the basis for my decision to subtitle Black Writing from Chicago with a question: In the World, Not of It?  After sometimes acrimonious debate the Free Africa Society split in two, the larger group following Absalom Jones into the Episcopal Church.  But Richard Allen knew those blacks were still denied full status in that church—being, for example, barred from governing boards and annual conferences.  “In 1816,” Bennett tells us, “he became the first bishop of the African Methodist Episcopal Church, the first national organization created by blacks,” and, he continues, “Men and women made in Allen’s image dominated the second phase of the Black Pioneer period, creating a tier of independent black churches that spanned the North…By 1830 there were black churches of almost every conceivable description, including an Ethiopian Church of Jesus Christ in Savannah, Georgia, and a black Dutch Reformed Church in New York City.”

On the business side of things Bennett extols Du Sable, who in the 1770’s laid, “the foundations of Chicago, building the first home there and opening the first business.”  Yet, says Bennet, “The contributions of Du Sable and other black founding fathers had no appreciable effect on the level of racism in America.  There are even indications that Du Sable the founder was isolated and pushed to the sidelines of Chicago life in the 1790s when large numbers of white Americans settled in the area, bringing with them traditional American perceptions.  If, as seems probable, Du Sable was indeed the victim of his own creation, he shares that mournful distinction with thousands of other black pioneers….”

♦  Go to the Black Writing from Chicago main page, where you can also BUY the book.

This entry was posted in Black Writers, Chicago Writing and tagged AME Church, Before the Mayflower, Black Writing from Chicago: In the World-Not of It?, Jean Baptiste Pointe Du Sable, Lerone Bennett Jr., Richard Allen. Bookmark the permalink.