The VIDEO below shows the singing of “Lift Every Voice and Sing”—the Black national anthem—at this year’s celebration of Juneteenth in Aurora, Illinois, June 19th, 2021. 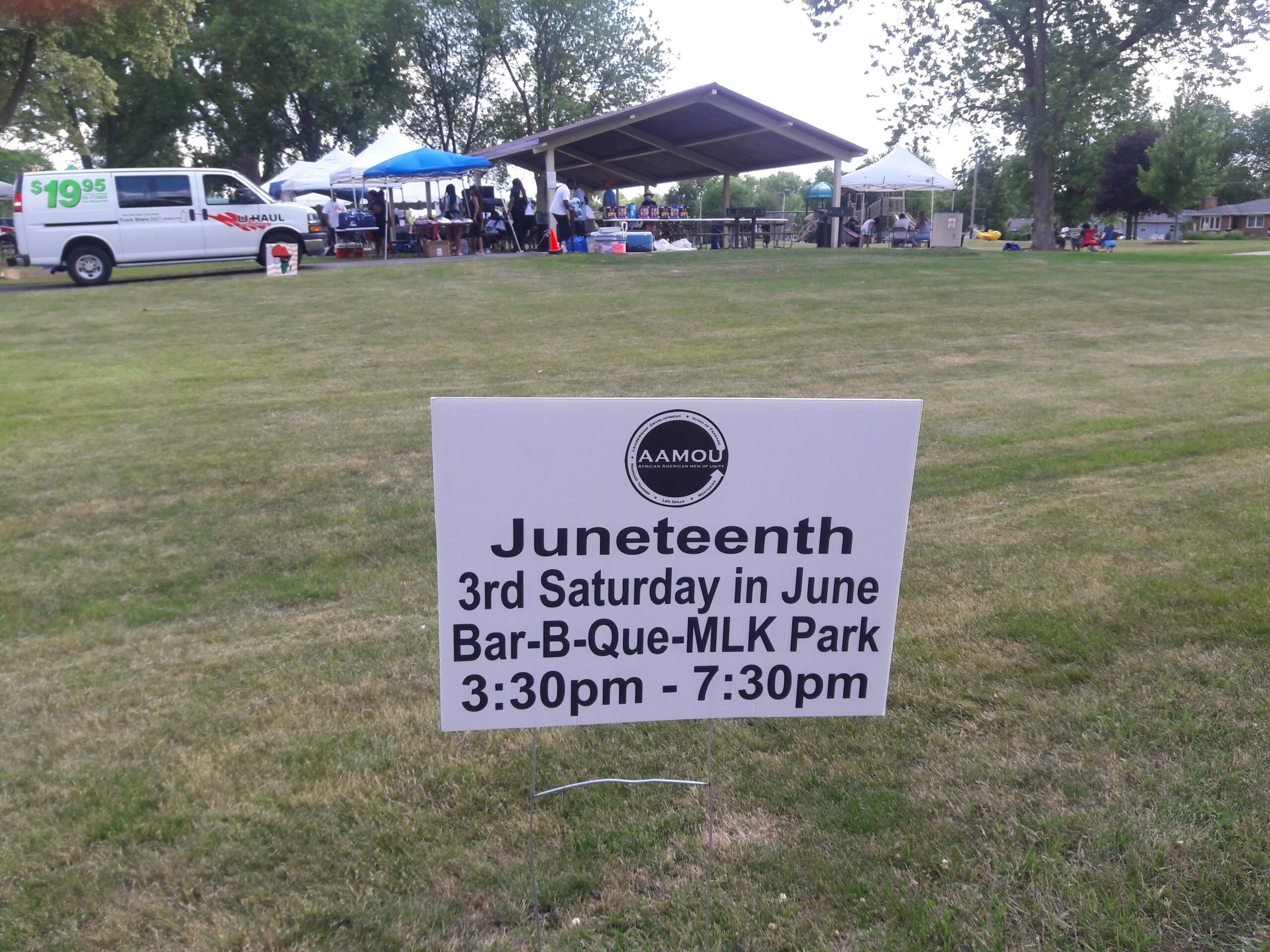 It took more than 2 ½ years after Lincoln issued the Emancipation Proclamation on January 1, 1863, for it to be fully enforced, dependent as it was on the progress of Union troops.  On June 19th, 1865, Union Army major general Gordon Granger arrived in Galveston to announce General Order No. 3, enforcing freedom of enslaved people in Texas, the last state of the Confederacy with institutional slavery.  June and 19th = Juneteenth, which has been celebrated here and there across the United States, especially in the Black community since 1865.  It took nearly 156 years longer for it to become a national holiday, when, on June 17, 2021, President Joe Biden signed it into being.

I was anxious to go to Aurora’s celebration this year, the first year Juneteenth went national, so to speak.  A reporter who knew my son Rick stopped us as we approached MLK, Jr. Park and asked us why we were there and if we knew what Juneteenth was.  Nine-year-old granddaughter Josie acquitted herself pretty well, telling what she knew of it, but none of us knew exactly how long Aurora’s celebration had been going on.  At least five years, we were sure, maybe even ten.  But it turns out that it’s been 20 years, and probably one of the oldest celebrations in Illinois. Ricky Rodgers, now executive director of African American Men of Unity (AAMOU), was one of the founders those decades ago, and when we arrived under the main tent he was doing DJ duties. 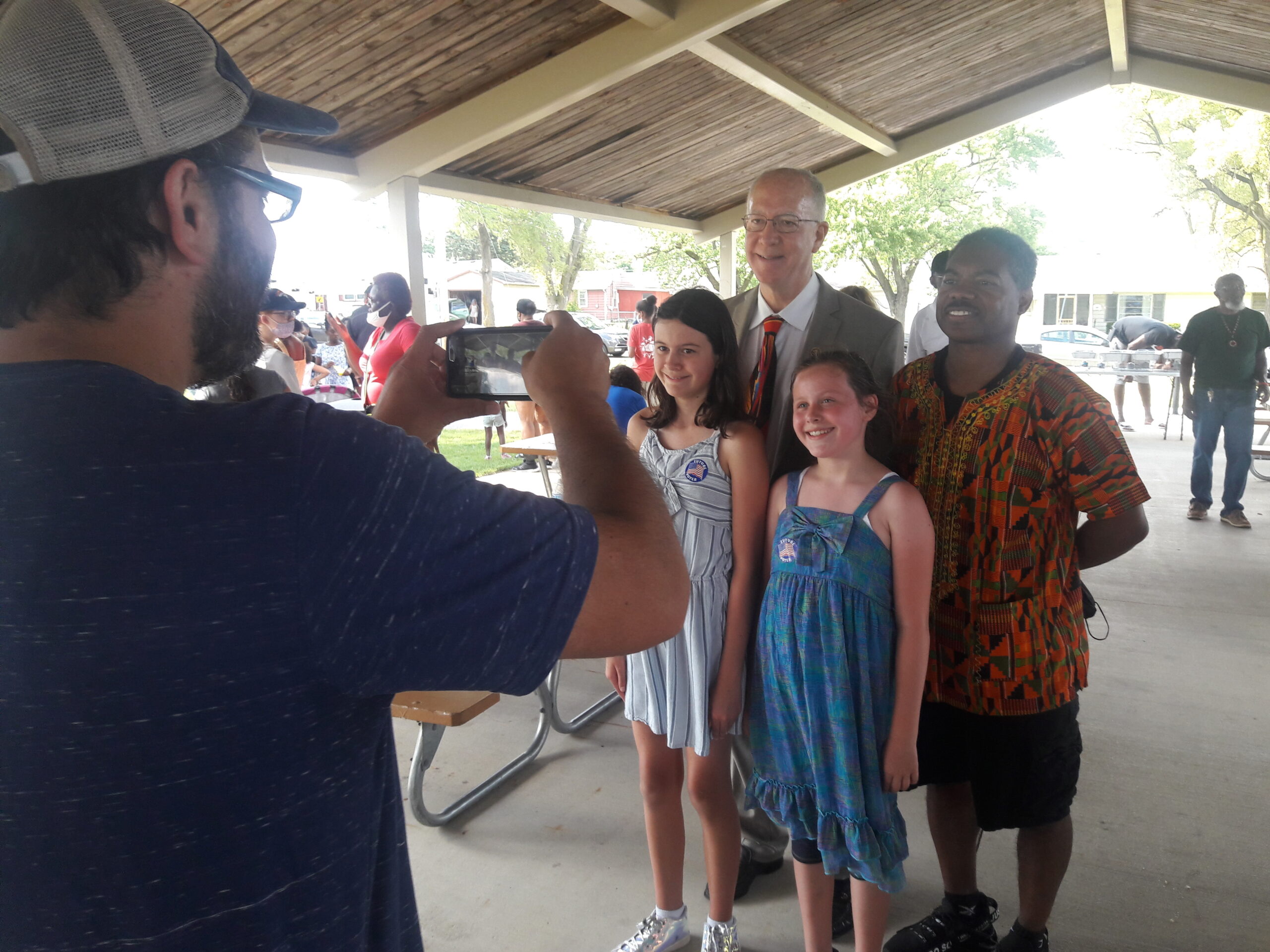 Earlier in an ABC7 news interview he had said, in part, “The way we celebrate Juneteenth in Aurora, it’s not to shame whites but to gather the whole community together to have a good time and embrace the heritage. It’s in the spirit of Sankofa.” Sankofa is most often symbolized by a bird whose feet face forward but whose head turns back to retrieve a precious egg.  “Se wo were fi na wosankofa a yenkyi,” goes a Ghanaian proverb: “It is not wrong to go back for that which you have forgotten.”

Aurora is one of the most diverse large cities in the U.S., and a diverse crowd showed up, along with some dignitaries Rodgers announced an hour after we got there: the mayor (Richard Irvin), our Congressman (Bill Foster), several aldermen, and others associated with AAMOU. Then he introduced Barnetta Mills, “our songstress,” he said, who asked us to stand for “Lift Every Voice and Sing.” 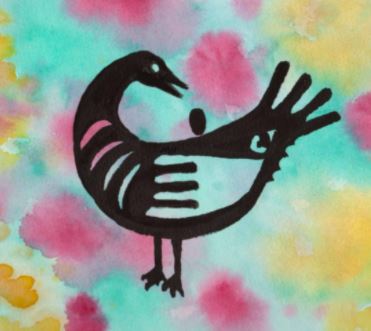 James Weldon Johnson’s words and his brother J. Rosamond Johnson’s music make “Lift Every Voice” the deepest, most unsparing anthem ever, I believe.  (I’ve been honored to sing and play it several times.)  It should be one of our signal guides as we enter our current discussions on race.  We need long, sustained discussions, ones that don’t cop out, claiming race fatigue.  Because, really, it’s taken us this long to begin understanding as a nation the things the Civil Rights Movement of the 50’s and 60’s  was saying to us.  We haven’t been discussing race and racism at the depth we now seem to be for that long: 3-4 years at the most.  If we’re tired of talking about it, think how tired people are who have had to suffer under racism for the 156 years it took for Juneteenth to become a national holiday, plus the 300 some years before that when the first enslaved people began their horrific Atlantic crossings.*  One of the deepest aspects of “Lift Every Voice” is its emphasis on endurance and what has been endured: “We have come over the way that with tears have been watered / We have come treading our path through the blood of the slaughtered.”  In early February 2020, just before the pandemic shut us down, I spoke on a panel on race, saying that IF we worked really hard we might see some significant progress in 40 to 100 years.  40 years is perhaps too hopeful.  100 years seems a minimum number that we ourselves must endure to be true.  True to what?  “Lift Every Voice” gives us the answer in its final two lines: “Shadowed beneath Thy hand, may we forever stand / True to our God, true to our native land.”

*  See Michael Guasco’s article in Smithsonian Magazine, “The Misguided Focus on 1619 as the Beginning of Slavery in the U.S. Damages Our Understanding of American History,” with it’s subhead: “The year the first enslaved Africans were brought to Jamestown is drilled into students’ memories, but overemphasizing this date distorts history.”