The Video/Audio below is an excerpt from the fifth show of my radio series Voices and Freedoms: A History of Jazz, based on my 1976 book of the same name.  The 16-part series played across the nation for five years in the late 70’s/early 80’ and holds its relevance—or is even more so—today than it was back then.  The excerpts present about 6 to 10 minutes of the original 30-minute broadcasts. The show below is at 9:20 because at the end we play all of the remarkable “West End Blues.” The link above takes you to information about the book and our plans to re-release it and provide access to the full-length original shows. Go HERE for a complete list of shows and links to all excerpts. 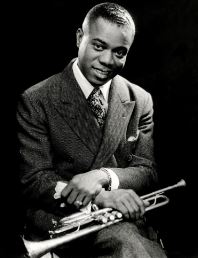 Today there’s lots of GOAT talk: who’s the Greatest Of All Time in basketball, Country Music, cooking, etc. etc.  It may surprise some to name Louis Armstrong the Greatest Of All Time in jazz, simply because so many know him mainly for his later offerings: “Hello, Dolly,” “Mack the Knife,” “It’s A Wonderful World,” plus his big-eyed mugging.  He was born, legend has it, on July 4, 1900, though it was probably more like August 4, 1901.  The iconic July 4th date, however, goes better with how much he meant to the early formation of jazz and its latter success in American culture.  He was jazz’s first great soloist and perhaps the music’s greatest ambassador.  His singing, too, was nearly as influential as his playing and helped me further the connection, central to both the book and radio series, that hearing the human voice is crucial to understanding the heart and meaning of jazz.

His late 20’s/early 30’s recordings for Chicago’s Okeh Records maintain connections to jazz’s earliest roots in New Orleans, still maintain its fun and exuberance, but also deepen the music and raise it to a level of art that sets standards even to this day.  No song does this better than “West End Blues,” which you’ll hear all of below, and whose opening cadenza and closing solo so balance each other in structure and emotion that anyone serious about playing jazz studies them over and over. 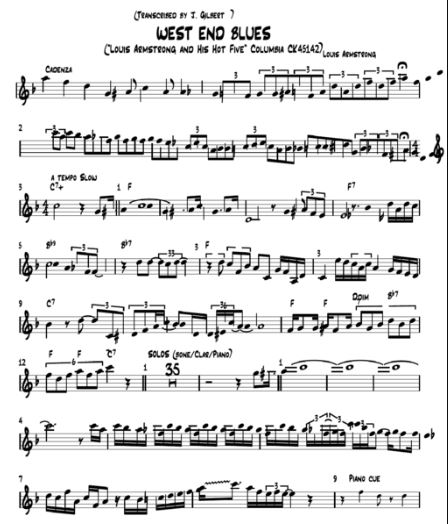 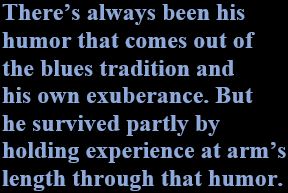 The humor and mugging that often obscures his supreme artistry comes partly from his seemingly unflagging exuberance, but also from the blues tradition which, as Ralph Ellison wrote, comes from a people “whose need to live despite the dehumanizing pressures of slavery developed an endless capacity for laughing at their painful experiences.” The great Louis Armstrong having to eat on a garbage can out in the alley because the club he was starring in wouldn’t serve him inside.  “It’s A Wonderful World.”  Indeed.  Even this seemingly all-sweetness pop standard carries a double-edged meaning.* Armstrong survived partly by holding experience at arm’s length through that humor.  But it was also by transmuting that pain into great art.  In the excerpt of Show 5 below you’ll hear that humor come out in the scat singing he does on “Heebie Jeebies,” the tune that may have started the whole scat fad in the first place, but the show begins with the more reflective “Blues in the South” before ending with “West End Blues,” an even more reflective piece.  The humor and exuberance are there, but they’re in the background. What comes forward is art’s ability to take on the fragmenting power of pain and make us feel whole again.

* This kind of double meaning comes out of the Black tradition of signifying, which I expand on in Episode Four of a lecture series on Ray Charles. I mention “It’s A Wonderful World” as a possible example of signifying.

This entry was posted in Jazz History, Music & Meaning and tagged Louis Armstrong, Voices and Freedoms: A History of Jazz, West End Blues. Bookmark the permalink.