Born into slavery in Texas, Lucy Parsons sometimes shunned her African-American identity, claiming her Native and Mexican-American heritage for self-protection instead.  However, her marriage to the white Albert Parsons so clearly defied Southern anti-miscegenist society that they were forced to flee, winding up in Chicago in 1873, where she and her husband’s anarchist, labor activism reached its height, particularly in the infamous Chicago Haymarket riots of 1886.  Albert was one of the men eventually hung for allegedly being part of a conspiracy, and Lucy Parsons herself barely escaped execution.  A mighty opponent of poverty, racism, and capitalism all her life, Lucy Parsons was known as a fiery orator and a skillful organizer of workers, and into her late 70’s she lectured throughout the country championing free speech and fair working conditions.

She was also a writer, but most of her work and her library quickly and mysteriously disappeared immediately after the house fire that killed her, and rumors linger that it was confiscated by government authorities that always kept close watch on her.  In 1889 she wrote The Life of Albert Parsons, with Brief History of the Labor Movement in America, a biography which indicted the injustices that led to her husband’s execution.

Haymarket, a new folk musical—(read my review of it Here)—focuses heavily on the contrast between Lucy and Albert concerning violence, the latter always pleading for non-violence.  Lucy sees it differently.  Her most famous writing is the essay “To Tramps,” which advocates direct violence against the state for the redress of wrongs against workers and the poor.  It ends with the famous imperative: “Learn to use explosives!”  Because it is readily available on the internet, for my book Black Writing from Chicago, I chose to represent Lucy Parsons with an interview she gave to the New York World, an interview Albert Parsons included in his Anarchism: Its Philosophy and Scientific Basis published in 1887.  In a brief editorial introduction to this piece, he calls this “the most succinct account we have ever seen” of the philosophy and goals of anarchism. 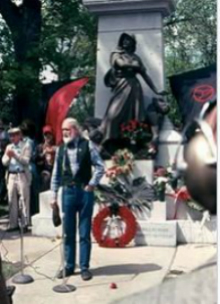 In a recent email, one of my former students, James Stewart, tells of using Black Writing from Chicago in class, mentioning Parsons as one of the highlights.  “The amount of times I’ve pored over that book for inspiration and ideas for my class along with my own personal writing has been invaluable. I may never have come across Leanita McClain, Lucy Parsons, or Frank London Brown without it and what a shame that would have been. The class in which the student discussed Parsons and Hampton was one of the absolute highlights. To hear freshman from various backgrounds debating the merits of violent and non-violent revolution, along with America’s constant struggle against white supremacy definitely helped give me hope in the ongoing struggle for justice and equality, which was hard to come by this year.”

The interview I used for Black Writing from Chicago begins: “This is the evolutionary stage of anarchism.  The revolutionary period will be reached when the great middle classes are practically extinct. The great monopolies and corporations and syndicates met with on every hand are now rapidly extinguishing the middle classes, which we regard as the one great bulwark between the monopoly or wealthy class and the great producing or working class.”  This has such a contemporary ring that my students are always shocked that the interview was given in the late 1880’s!  And though a great deal of Parsons’ fire came from her not shying away from violence, this piece shows the larger context of her stance.  It’s a judicious use of violence.  And “anarchism” appears here as a political vision where politics isn’t totally abandoned but is radically de-centered.  It also places great store by guilds and unions.  “We hold,” says Parsons, “that the granges, trade-unions, Knights of Labor assemblies, etc., are the embryonic groups of the ideal anarchist society.”  Towards what end?  “Drudgery, such as exists to-day, will be reduced to a minimum. The children will be taken from the factories and sent to museums and schools…people will have more time for pleasure and cultivation of the mind…we claim that the sum of human happiness will be increased, while the drudgery and poverty and misery of the world of today, all due to the powerful concentration of capital, will be done away with.”

Such visions led to many practical reforms.  Anarchism as political philosophy has obvious shortcomings, but now in an age where the concentration of capital has reached heights greater than even she imagined—heights in many ways exceeding even the Great Depression*—we could do worse than turn at least a partial ear to Parson’s call for an equality that would increase “the sum of human happiness.”

This entry was posted in Black Writers, Social Change and tagged Albert Parsons, Black Writing from Chicago: In the World-Not of It?, Haymarket Riot, Lucy Parsons. Bookmark the permalink.