Mandala Making on the Web

In the 2014 excerpt from my journal “Climbing Bryan’s Mountain,” I commented on the Buddhist ritual of sand mandalas as a symbol of the beauty and impermanence of life.  After days of patiently using colored sand to build the mandala’s elaborate shapes, the whole thing is brushed away almost as soon as it’s completed, the sand ceremonially given away, or dumped into a nearby river.  In late February this year, an email from the East-West Center at the University of Hawai’i, Manoa, reminded me of mandalas again. 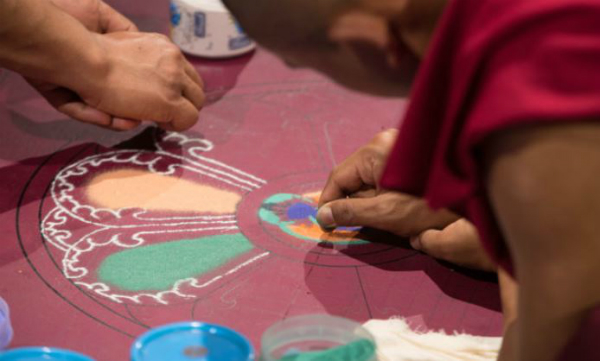 For a week, starting February 25, 2018, Bhutanese monks constructed a mandala at Manoa, and Honolulu Civil Beat did a live “mandala cam,” which you can view HERE.  After a short explanation, you’ll be presented with a series of videos.  I think the shortest one is just under two hours.  Most of them are well over two hours, some over four.  Sometimes monks use small, conical funnels filled with different colored sands, patiently tapping the funnels with small sticks to sift the sand out onto the template they have carefully drawn.  The Bhutanese monks at Manoa just used their hands, dropping pinch-fulls of sand precisely.  Hour by hour by hour color and beauty emerge. 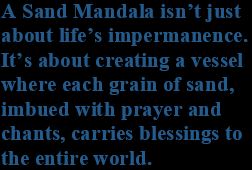 The Bhutanese Buddhist ritual at Manoa seems a fairly quiet affair, while at other mandala builds there’s more music, chanting, and general hubbub—especially when onlookers flood the scene, peering over the monks’ shoulders while cameras click and flash and roll, capturing the mandala’s emergence.  It’s a gradualism, like a flower opening—only more slowly—and most onlookers don’t stay very long.  Or look at real-time videos very long either.  So in addition to the two and four hour videos on the Honolulu Civil Beat site, there’s also what seems to have become the obligatory time lapse video, a wondrous sight, amazing in its own way, but also, it seems to me, fundamentally opposed to the long patience of building the mandala and then brushing it away.

But who has the patience, or time, these days.  So here are some recommended short videos—most are time lapses—on the sand mandala ritual. 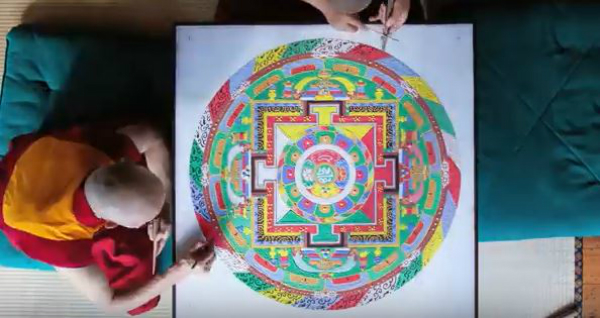 ♦  The image above comes from the Asheville, North Carolina, Urban Dharma mandala event. Watch a time lapse of it HERE.  The video includes an important note about the mandala’s meaning.  Though these notes dismiss the idea of impermanence—a mistake, I think—they add that the mandala is also meant as a container of blessing.  Not only during construction, but for days—even weeks—before its construction, chants and prayers are read in preparation.  These imbue each grain of sand with messages and hopes which, when the mandala is brushed away and ceremonially dumped into a river, find their way to the ocean and onto shores all over the world.

♦  As for that dismantling and brushing away, here’s a video of that, which comes from the Blanton Museum event in Austin, Texas.  Photographer Brian Birzer writes about the event and posts great photos of it HERE.

♦  And finally, for now, two more time lapses, the first showing the creation of the Kalachakra Mandala at the University of Arts, Philadelphia, PA.   The second video from the Crow Collection of Asian Art in Dallas, Texas, features—besides some of the finest details of mandala making—some of the music that sometimes accompanies the art.

Until we find the patience and depth very partially conveyed by the long videos provided by Honolulu Civil Beat, these time lapses aren’t a bad place to start.