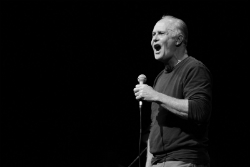 The VIDEO below captures Marc Kelly Smith performing “American Eagles,” one of seven poems he did in a series on tattoo artists.

Marc Smith is founder and promoter par excellance of the Slam Poetry Movement, what several critics have dubbed the most significant grass roots arts movement in the U.S.  It’s one of the great evenings in Chicago: the Uptown Poetry Slam, hosted by Smith at the Green Mill on the corner of Lawrence and Broadway, Sunday at 7:00.

Later, read more about Marc Kelly Smith, and his Slam, and the Slam Movement.

For now enjoy this performance.  Marc Smith performed in Pfeiffer Hall on the campus of North Central College in a program celebrating the release of a book David Starkey and I edited: Smokestacks and Skyscrapers: An Anthology of Chicago Writing.  In 1999 it had been 50 years since someone had put something like that together, and Smokestacks was—and remains—by far the most comprehensive, most diverse Chicago anthology ever.  Smith is in it, as are over 70 writers stretching from Father Marquette and Patowatomi Chief Metea to the usual suspects—James T. Farrell, Saul Bellow, Gwendolyn Brooks, Richard Wright, etc.—to the incendiary poem “Smokestacks, Chicago” by Campbell McGrath, which closes the collection.