Writer of essays, children’s books, and poems, Margaret Burroughs (1915-2010) is best known  for her art and her involvement in Chicago culture.   In 1961 using their own collection of art and artifacts, she and her husband Charles started a small museum in three rooms on the first floor of their recently purchased South Michigan Avenue home, originally calling it the Ebony Museum of Negro History and Art.  In 1968 they renamed it after Jean Baptiste Point du Sable, the black settler considered the first permanent resident of what would become the city of Chicago.

The DuSable has grown to become one of Chicago’s most important cultural institutions, and Mrs. Burroughs (pictured here with a bust of DuSable) one of its leading citizens.  Of the DuSable she later said, “A lot of black museums have opened up, but we’re the only one that grew out of the indigenous black community…We weren’t started by anybody downtown.” At her death in 2010, aged 95, President Obama paid tribute to her many “contributions to American culture,” lauding her for her “commitment to underserved communities” and all her work “that both inspired and educated young people about African-American culture.”

Besides being president of the DuSable—a position she gave up when Mayor Harold Washington appointed her commissioner of the Chicago Park District—Margaret Burroughs taught for more than 20 years at DuSable High School on Chicago’s South Side, and for over a decade at Kennedy-King College.  And through all this she also managed to 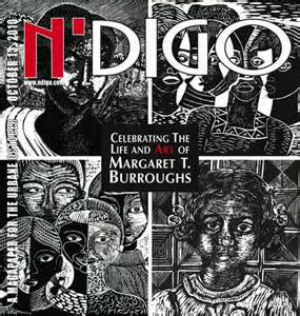 create an impressive body of art herself.  She was, after all, a graduate of the School of the Art Institute of Chicago (bachelors in 1944, masters in 1948) and also studied at the Esmeralda Art School in Mexico City, the influence of that experience clearly visible in the form she gained most notoriety in: the woodcut. One of my most prized possessions is a Modonna and Child woodcut she signed to me when I met her sometime in the mid-80’s.  The October 13, 2010, cover of N’Digo to the left shows four iconic woodcuts, perhaps the most famous being “The Face of Africa” in the upper left.   I also love the two woodcuts below, “Riding Together in the 60’s” and “Folk Singer.”  Both show not only her mastery but her sense of history, especially her belief that Black history IS American history.

Virtually every poem in her 1968 What Shall I Tell My Children Who Are Black?  urges the importance of black pride and black history.  In “To Non-African American Brothers and Sisters” she attacks slanted, lying white history by extolling blacks who invented the blood bank, performed the first open-heart surgery, “proportioned the Sphinx,” etc.  “Homage to Black Madonnas” is one of several poems (and an included lecture titled “Message to Soul Sisters”) 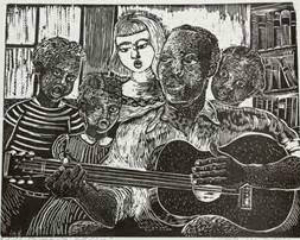 From this book I included a poem she wrote for her grandson in my book Black Writing from Chicago.  I said in the introduction, “If this anthology needs a smaller, sweet piece of writing, the piece below is it; and even here Burroughs’ sense of the importance of history filters in.”

“For Eric Toller: Age 10 months, 7/3/1966” begins with interesting and sweet grandmotherly sentiments:  “As soon as the first delicious chortle smacked the air, / I became a wiser, smarter, and more intuitive person. / Now I know all, see all, and sense all since you came, Eric.”  But soon the passion that drove her life—though still expressed with grandmother sweetness—finds its inevitable way in:

I have become highly conscious of our folk heritage and lore
For I realize that it is my duty to pass it on to you.
So lately, I have been going over songs and rhymes and games
Of our people, and the stories of our great heroes and heroines.
Like Tubman and Truth, Douglass, Gannet and Wheatley and more.
For it is up to me to acquaint you with these noble ancestors.

Less than two years after this poem, her and her husband Charles’ little museum, then five years old, would become the DuSable Museum of African American History.