Marita Bonner Inducted into the Chicago Literary Hall of Fame

Because of the economics of publishing, books can only be so big.  As one reviewer wrote of my book Black Writing from Chicago, my Afterword seemed too much like a long list of apologies.  Exactly.  It was.  And the second person I apologized for omitting was Marita Bonner.  On Friday evening, November 16th, at the famous Cliff Dwellers club, 22 stories above Michigan Avenue in Chicago, Marita Bonner—along with legendary publisher Robert Sengstacke Abbott and novelist Henry Blake Fuller—was inducted into the Chicago Literary Hall of Fame.  Abbott’s Chicago Defender newspaper had an enormous impact on America—fueling, in large part, the northern migration of hundreds of thousands of American Blacks.  Fuller is considered one of America’s greatest unsung novelists—his 1893 novel The Cliff-Dwellers being the inspiration for the name of the Cliff Dwellers’ club, a club devoted to the arts and architecture, whose past members have included Hamlin Garland (the novelist who started the club), Carl Sandburg, Frank Lloyd Wright, Louis Sullivan, Booth Tarkington, Roger Ebert, and many more luminaries. 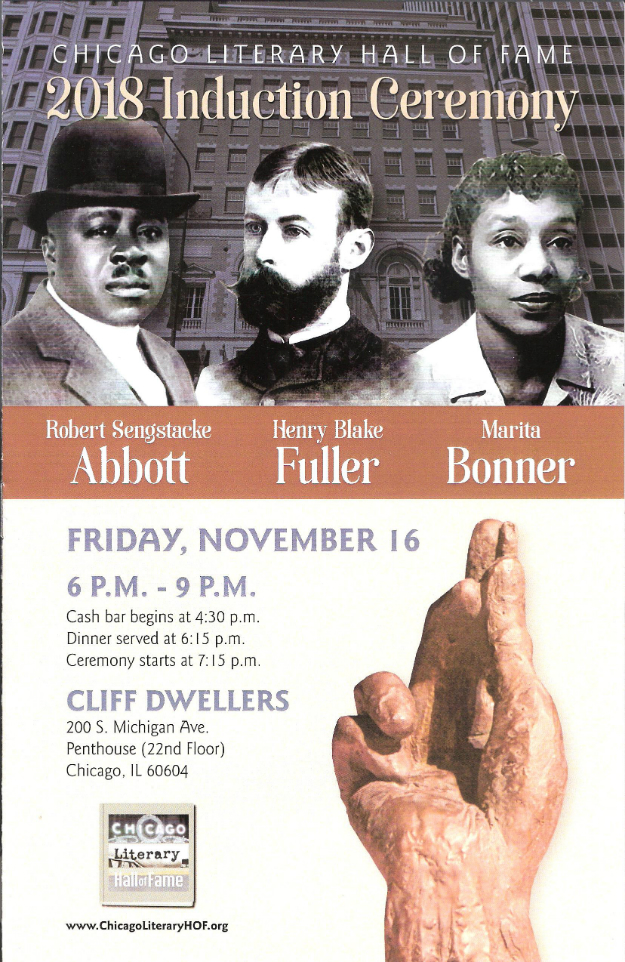 I was privileged to speak on behalf of Marita Bonner’s induction.  Below is the gist of what I said:

When I wrote about Marita Bonner in Black Writing from Chicago, I mentioned her influence on just three Chicago writers: Era Bell Thompson, Alice Browning, and Audrey Petty.  But Marita Bonner is one of the great transitional figures of Black American writing, and her influence runs deep and wide.  On page after page of her collected works, Frye Street & Environs, I read passages like these, the first from her play The Pot Maker, the second from her short story “Hate is Nothing:”

“You can see she is a woman who must have sat down in the mud. It has crept into her eyes. They are dirty. It has filtered through—filtered through her. Her speech is smudged. Every inch of her body, from the twitch of an eyebrow to the twitch of muscles lower down her body, is soiled…She picks up each foot as if she were loath to leave the spot it rests on.”

“There were times when she loved him for his calm immobility.
“But when there was a tale that carried her in quick rushes before everything—a speck of dust in the winds of Life—she never looked at him. He always made her impulses seem bad taste with his patience and aloofness.”

I catch myself saying, I’ve heard this rhythm, this kind of perceptiveness before. Where? Then it comes to me: Toni Morrison.  And as I studied Marita Bonner more, I saw that a few others has made the same shadowy connection.  These stylistic similarities came with a fascination with shape-shifting, and, even more, escaping all those identities that get foisted on you because you’re a certain class, a certain race, a certain gender.  If this talk had a title, it would be “Marita Bonner: Escaping Imposed Identities.”  In her person, in her writing, she dodged a lot, trying to escape identities that trapped you.

She is often associated with the Harlem Renaissance—one slight reason I didn’t include her in Black Writing from Chicago—and the New Negro Renaissance, which, of course, had the New Negro concept at its core, a concept that took its most potent forms in Harlem.  But Marita Bonner, while she embraced Harlem and the New Negro, also casted a wary eye on them, too.  The embrace was complicated, never full.  She escaped these identities geographically, even, being born and educated through high school in Boston, working in West Virginia, moving to D.C. next, then winding up in Chicago, where her writing bloomed, especially through her creation of her mythic, multi-ethnic neighborhood, Frye Street.

[Here, I wove together most of the ideas in two of my recent articles on this site: “Marita Bonner: Escaping Imposed Identities,” and “The Intercollegiate Wonder Book and the New Negro,” which detail her complicated embrace and her moves to escape the weights of these identities.]

She dealt harshly with those who would embrace the New Negro concept at the expense of splitting black people into a “we” and “them”—the successful New Negro, as opposed to the impoverished, underachieving, “lower class” Black—instead of thinking in terms of unity, of black people as “Us.”  In fact, in her play The Purple Flower, she refers to black people as the “Us’s,” who are trying to climb a hill guarded by white devils to reach the “purple Flower-of-Life-at-Its-Fullest.”  Still, Bonner was also suspicious of what Joyce
Flynn, the editor of Frye Street & Evirons, calls “romantic racialism” and the over-valuing of blackness.  In the story “The Hands,” for example, a young woman boards a bus and notices the hands of a black worker.  She begins to spin stereotypical scenarios about what this man is supposed to be and do given his blackness.  Yet, finally, she refers to these as mind games.

Marita Bonner also tried to escape the trapping identities imposed on women, and black women in particular, especially when they were supposed to subordinate themselves to a unified Black Identity to push forward the New Negro, usually seen, of course, as a man.  Characters like Lee in “Hate Is Nothing” take charge.  They do rush forward, but with a momentum that shows they are more than specks of dust in the wind.  And sometimes, when pushing back or pushing forward doesn’t seem efficient, they just wait.  In her earliest essay, “On Being Young—A Woman—And Colored” (a titled echoed by Lorraine Hansberry two decades later), she writes:

“You must sit quietly without a chip. Not sodden—and weighted as if your feet were cast in the iron of your soul. Not wasting strength in enervating gestures as if two hundred years of bonds and whips had really tricked you into nervous uncertainty.
“But quiet; quiet. Like Buddha—who brown like I am—sat entirely at ease, entirely sure of himself; motionless and knowing, a thousand years before the white man knew there was so very much difference between feet and hands.
“Motionless on the outside. But on the inside?
“Silent.
“Still. ‘Perhaps Buddha is a woman.’
“So you too. Still; quiet; with a smile, ever so light, at the eyes so that Life will flow into and not by you. And you can gather, as it passes, the essences, the tints, the shadows….”

It must be said, however, that there’s a lot of violence in Bonner’s stories—fist fights, knives, guns, family feuds, people falling out windows—not just images of peace like this. And this violence often flares when we approach racial mixing.  The truth she realized is that we are complex mixes, hybrids.  She turned most to multi-ethnicity, diversity, and blended identities to escape those simpler identities imposed by race, class, and gender.  In “Marita Bonner: Escaping Imposed Identities” I quote fully the second paragraph of her story “Nothing New,” where she introduces Frye Street as a mix of races, ethnicities, looks and languages.  “Frye Street flows nicely together.  It is like muddy water,” she writes.  But the story revolves around two violent scenes when the main character, Denny, is a young boy reaching for a flower on the white side of the street, and when he’s a young man falling in love with a white girl.  It all ends tragically, typically.  Nothing new here.  Yet Bonner begins the story and ends the story with with similar paragraphs that act as prelude and postlude.  The image at the center of both is of muddy water running downhill until it’s filtered to a clear water everyone can drink from.  This to me is symbolic of Marita Bonner’s complex dream.  Her writing holds out the possibility that muddy water filtered through diversity, through multi-ethnicity, through fought-for identities that are your own and not just ones imposed from the outside—that these will somehow filter the muddy water into a clear spring we more than ever need to come down and take a drink from.

♦  Go to a List of Black Writers written about on this site.

This entry was posted in Black Writers, Writing and tagged Black Writing from Chicago: In the World-Not of It?, Chicago Literary Hall of Fame, Henry Blake Fuller, Marita Bonner, Robert Sengstacke Abbott, The Cliff Dwellers Club. Bookmark the permalink.