Mark Turcotte: Songs for the Endless Others 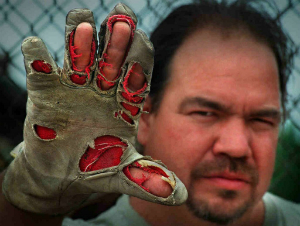 Poet Mark Turcotte (b. 1958) spent his earliest years on North Dakota’s Turtle Mountain reservation and in several migrant camps in the western U.S.  Drawn to Chicago in 1993, partly because of the city’s thriving poetry scene, he established himself as a unique voice among Chicago poets and also worked at the Chicago Historical Society.  He won the first Gwendolyn Brooks Open-Mic Award in 1993, and among many honors and grants received the  2001-2002 Lannan Foundation Literary Completion Grant, and the 1999 and 2003 Literary Fellowships from the Wisconsin Arts Board. He also worked at the Wind River Indian Reservation of Wyoming on a National Book Foundation American Voices assignment

Turcotte is author of The Feathered Heart (1998), Songs of Our Ancestors (1995), Road Noise (a chapbook, 1998) and Le Chant de la Route (2001). His collection Exploding Chippewas (2002) is in its third printing. His work has appeared in many publications, including LUNA, TriQuarterly, POETRY, Prairie Schooner, and Ploughshares, and has four times been nominated for Pushcart Prizes.  More recently he has also published short stories in Rosebud and Hunger Mountain.  One of his poems, “The Flower On,” has even appeared on poetry placards on public transportation in cities across the United States as part of the Poetry Society of America’s Poetry In Motion project.

In my book (with David Starkey) Smokestacks and Skyscrapers: An Anthology of Chicago Writing, I included two poems from The Feathered Heart: “Horse and Cradle” and “Song for the Endless Others.”  They illustrate Turcotte’s unusual, innovative blending in both theme and language of Native American culture with notions of whiteness and with urban landscapes.  A mixed-blood Chippewa, Turcotte’s most popular poem is probably “Exploding Chippewas” followed by “Horse and Cradle,” where he celebrated his mother and father.  It begins: “she white woman fell /  in love with the / black wave / of his hair….”  And “Song for the Endless Others” contains one of my favorite evocations of urban Native American life: “i see the endless others / sparkling blue beneath the El / as they laugh / and as they dance / across the station walls / train to train / out into the streets to tangle / up the taxis in their hair….”  Though Turcotte primarily celebrates the Endless Others, the hints of sadness in his tone, combined with the shameful, abysmal  history of America’s treatment of Native Americans, can’t help but suggest that these, our First Peoples, are also Endlessly the Others.  In a country where we often take pride in Native American ancestry and traces of the Native continually surround us—in the names of our states, our cities, our very neighborhood streets: Illinois, Mississippi, Dakota, even the stinking onion of Chicago itself, for example—we nonetheless often care so little, if at all, for Native American peoples themselves, all locked away (so we think) on “the reservation.”

Turcotte holds an MFA from Western Michigan University.  He served as the 2008-2009 Visiting Native Writer at the Institute of American Indian Arts in Santa Fe, New Mexico, and is Visiting Assistant Professor in Creative Writing at DePaul University.  He has read his work from Boston to Santa Fe to Fargo to Montepellier, France, and currently lives and works out of Chicago and Kalamazoo.

♦  Go to Smokestacks and Skyscrapers, where you can also BUY the book.

This entry was posted in Chicago Writing, Writing and tagged Chippewa, Exploding Chippewas, Mark Turcotte, Smokestacks and Skyscrapers: An Anthol. Bookmark the permalink.