Yesterday morning brought the news that Maya Angelou had died at age 86.  The news coverage was befitting this American icon—long segments on virtually every national and local newscast, front page New York Times, plus a full page and half of another inside. Maya Angelou was the most commanding person I ever met.  She commanded your attention for many reasons, but mostly because you sensed immediately her deep humanity.  Grace radiated from her.  And then there was the voice.  “In a Commanding Literary Voice, Singing Out to the World” is the title of Elizabeth Alexander‘s appreciation of her in today’s New York Times (May 29, 2014).  Yes, that distinct literary voice, but I mean her literal voice, which Alexander also mentions, calling it “lustrous, deliberate, precise.”  It was a voice that said, Alexander continues, “I have mastered the language and its elocution, and there are stakes in that mastery from people who were assumed unworthy of culture and citizenship.”  On a smaller, more personal level I relate as much to Alexander’s characterization of it having “a singer’s coloration as well as the captivating, unhasty pace of someone used to commanding attention, a star.  She spoke in the rich chest-voice of a grandmother singing a song at bedtime.” 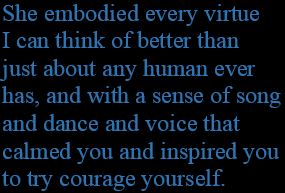 In 1989 I brought her to my college where she challenged all of us to set the bar high for ourselves because, as she said, “You have already been paid for,” been sacrificed for by the struggles and deaths of your forebears.  But before her talk, as everyone scurried around to check lights and mics and mind the overflowing crowd, she said to me, “Can’t you and I sit down for a minute and take time to be human.  You remind me of my son.  He’s Filipino too.”  Something like that, so that I sometimes feel she wasn’t just an American icon, but actual kin.  Oprah called her Mother.  And Oprah also showed up that Thursday night, March 30th.  You can read my reminiscence of that extraordinary evening Here.

The picture above shows President Obama awarding her the Medal of Freedom, and everyone clapping, including the next honoree, Warren Buffett.  And the pictures below are from today’s Times.  I like the middle one, especially it’s caption: “Dancing with the poet Amiri Baraka over the ashes of Langston Hughes.”

We lost Amiri Baraka this year, too (January 9, 2014), so it’s easy to imagine them continuing the dance now, swinging, as in Singin’ and Swingin’ and Gettin’ Merry Like Christmas (1976), the third of her five autobiographical books.  Soon after Barack Obama asked Elizabeth Alexander to write and read a poem for his Inauguration, Maya Angelou—the second poet ever to read at a Presidential Inauguration—called Alexander—the fourth ever.  “If you have a song to sing, who are you not to open your mouth and sing to the world,” she said.  Maya Angelou wrote poems made to be read, to be lifted off the page by song, and acted out in the world with courage.  For this reason the academic world—so often confused or scared by embodiment, content to keep things, well, academic—did not appreciate her as much as it should have.  “Courage,” she often said, “is the greatest virtue, because without it you can’t practice the others.”  You can’t embody them.  She embodied every virtue I can think of better than just about any human ever has, and with a sense of song and dance and voice that calmed you and inspired you to try courage yourself.

♦  Go to a list of Black Writers written about on this site.