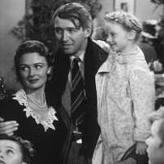 Of the holidays, Thanksgiving seems to get more lost each year, trapped as it is between two spending juggernauts, Halloween and Christmas.  These two also duke it out decoration-wise, so that pumpkins and goblins often find themselves wreathed and hollied under twinkling lights even before the last trick-or-treaters are off the streets.  It doesn’t seem right, but—Thanksgiving having been yesterday—it now actually feels ok to begin indulging the Christmas spirit.  It doesn’t feel ok, however, to kick off this indulgence with Black Friday, a madness that seems to have dealt Thanksgiving a final, mortal blow. Could the supposed “real meaning” of Christmas—on the ropes for quite a while itself—be next?  For the present, Christmas seems a little less buried under  the avalanche of materialism than poor Thanksgiving does.  The church’s fight to keep us thankful has paled mightily, partly because their stance on materialism has also paled, but it obviously has more shareholder’s stake in Christmas, and more allies.  The Rockettes’ Christmas shows, for one, but also the movies.  A Christmas Story, Miracle on 34th Street, various versions of Scrooges and Grinches and Rudolphs—perhaps these do as much as churches these days (sad to say) at keeping Christmas “real.”  Of course, there’s also legendary director Frank Capra’s holiday classic It’s A Wonderful Life.  For me it has special meaning not only because of the season, but because of this: my holiday story that always shadows my own poor efforts to keep Christmas from going the way of Thanksgiving.

One day when I was a graduate student in Charlottesville, Virginia, I saw a fellow grad student, Greg, approaching with an older gentleman.  Greg and I knew each other only casually, and even now I’m not quite sure of his last name, though I’m sure it began with a “T.”  I also knew his passion was film.  “Richard,” he said too jovially, as if we were bosom buddies, “this is Frank Capra.  I have to run a 10-minute errand. Could you keep him company?” And with that he handed me a poster, and I walked into an office and sat down with Frank Capra.

I had no idea who he was.

I glanced at the poster, a nice black and white job.  “CAPRA” it said, and below that a picture of the man I now sat across from, and below that names of films: It Happened One Night, Mr. Smith Goes to Washington, It’s A Wonderful Life….  I hadn’t seen a single one.  I’d never even heard of a single one, a fact that astonishes me now.  Not only do I use a lot of film in my classes, but have started a film festival and helped start and now advise my college’s student film club, Celluloid.  Back then, in the mid-70’s, I hardly knew what “celluloid” was, but that was the least of my problems at that moment.

What to say to an evidently famous person you know absolutely nothing about?  It was worse than when I met Oprah years later.  Though I’d never seen her show—at least no more than minutes of a few of them—I remember seeing her name on tabloid covers I’d scan waiting in line at the grocery, tabloids which seem inordinately fixated on her weight: “Oprah loses 40,” “Oprah gains 40.” But this is another story for another day, one I remember vividly.*

I remember nothing of how I passed those eternal 10 minutes with Frank Capra.  Evidently, I asked him how he liked being at the university, and also would he sign my poster because  I have it to this day, signed “For Richard Guzman, With fond memories of Virginia U — Frank Capra.”  Just as evident, I did not convey the right university name to him.  This was the university founded and designed by Thomas Jefferson: the University of Virginia, Mr. Jefferson’s university—it was always Mr. Jefferson this, Mr. Jefferson that—but never “Virginia U.”  Years later, I still find comfort in his misnaming, as if Capra’s tiny faux pas somehow managed to balance out my colossal ignorance.

That night I made sure I was at the screening of Capra’s movie Mr. Smith Goes to Washington, and I like to remember that when he saw me enter the auditorium he motioned me to sit right in back of him.  At one point, Jimmy Stewart leans over the female lead and says, “For a woman, you’ve done all right for yourself.”  Hisses filled the room.  And afterwards someone asked, “Mr. Capra, who made up the phrase Capra-corn?”  “Oh, some son-of-a-bitch!” he retorted, and the room went up for grabs.

This morning the business section of my Thanksgiving Chicago Tribune carried headlines like “Black Friday blurring the days: Retailers are pushing Black Friday back, hour by hour, into Thanksgiving…,” and “Black Thursday here to stay: Stores like Thanksgiving hours, as does Wall Street.”  And last night a Hyundai TV ad, showing a November calendar with every day blacked in, proclaimed, “Every day in November is Black Friday!”  In the face of this and so much more, I say break out all the Norman Rockwells we can find and bring on all the corn—Capra and otherwise.  In the last scene of It’s A Wonderful Life Mary Bailey (Donna Reed) poses George (Jimmy Stewart), herself and the kids prettily in front of their Christmas tree to witness their Christmas miracle: seemingly everyone in town turning out to dump coins and bills into a huge basket placed prettily in front of the family.  Even the bank examiner, who’s been investigating a significant short fall in the Bailey Building and Loan’s books, throws in some cash, prompting a policeman to tear up and throw in an order for Bailey’s arrest.  It could be seen as a vision of community triumphing over corporate power.  Yeah, Right, we’re tempted to think more and more cynically these days, especially now that our Supreme Court has granted corporations rights as if they were persons.  But that wild scene of community triumphant—corny as it might be to some sons-a-bitches—is a much healthier thing to hold on to, especially if we think it might be nice to keep at least a few things holy during this holiday season.

* Read the Oprah story (which is really about Maya Angelou!).

** Go Here for a list of movie reviews, which includes a “review” of sorts of Capra’s classic It’s A Wonderful Life.