Memories from the Mountains

This piece was written many years ago for the Chicago Reader (which eventually didn’t publish it) as a review of the Field Museum exhibit “The People and Art of the Philippines” mounted in the early 1980’s.  It is slightly modified from the original manuscript. 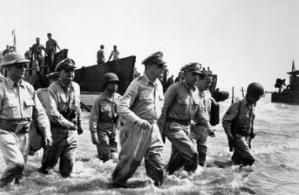 It is one of the most memorable scenes of the Twentieth Century.  On October 20, 1944—two years, seven months, and nine days after telling the Philippine people he would return—U.S. General Douglas McArthur was indeed back, striding now in the surf of a Leyte beach, sunglasses in place, jaw set in a scowl which seemed to indicate the steely character of one who habitually fulfilled great prophecies, even if they were his own.  On the way to the beach the General’s barge had paused at the transport John Land to pick up two famous Filipinos.  Carlos P. Romulo, sometime press aid to the General and always one of his greatest allies, came down the ramp first.  The second was Sergio Osmena, the man who had assumed the Philippine Presidency at Manuel Queson’s death on August 1st.  Some have read hesitancy and reluctance into Osmena’s greeting of MacArthur at that moment, and for good reason.  Dull and weak in comparison to the beloved Queson, Osmena felt all the more small in the presence of the demigod MacArthur.  Anyway, he could never be as close to the General as Romulo, and could only recede further as MacArthur embraced his glamorous compatriot and said, “Carlos, my boy! How does it feel to be home?”

That’s the way it seems to be for the Filipino: powerless, on the one hand, to compete with a foreign intrusion, and, on the other hand, almost too willing to accept a foreign embrace.  It has been this way for centuries.  The landing site the General surveyed from his barge on that October 1944 afternoon was very nearly the same landfall he had contemplated as a young officer on his first trip to the Islands in 1903, and very nearly the same that greeted a famed explorer some four centuries earlier.

Magellan made his fateful landfall on March 16, 1521, and since then, with the signal exception of his slaying six weeks later by Lapu Lapu—now seen as a great Philippine hero—it has seemed possible to read the bulk of Philippine history as a series of capitulations.  Politics, religion, even names—these all became largely Spanish; and the Americans transformed the culture even more.  The first political party organized under American jurisdiction (the Partido Federalista) has as one of its major planks eventual annexation to the U.S.  And in general Filipinos so embraced American ideals—albeit after a fierce, bloody, valiant resistance: the Philippine-American War—that Americans found it natural to refer to them as “little, brown brothers.”

“I am often at a loss to account for the genuine native,” wrote the Philippine journalist P.C. Morante in 1940.  “I have the physical qualities of my race; but I feel that the composition of my soul is thoroughly soaked with the alien spirit…My actions and reactions, my thoughts and ideals, even my complexes and inhibitions—all this seems to revolve around a foreign pattern that is easily recognizable as intrinsically of the West.”

Here’s a famous Philippine joke.  A Filipino takes an unsuspecting American to a restaurant and asks if he’d like to try the Philippine national drink. “Of course!” the American replies enthusiastically.  The Filipino orders him…a Coke.

That was my generic introduction to almost anything I’ve written about Philippine culture.  MacArthur, Magellan, Spanish surnames, Coke.  A multitude of similar scenes, similar artifacts.  They all imply the same thing, all seeming to pop up whenever I think and write about my Homeland.  They crowded my mind each time I visited the recent Field Museum exhibit “The People and Art of the Philippines.”

The introductory information mounted neatly on a wall plaque at the exhibit’s entrance speculates that some of the artifacts on display may be news even to many Filipinos.  That’s probably true—not necessarily because Filipinos are unaware of them, but because they are only now beginning to see them in a certain light.  The exhibit’s artifacts may be divided roughly into two categories.  The first, the category of “the familiar,” are those heavily influenced by the West, especially Spain.  Here are moving paintings of the Crucifixtion, a gorgeous church altar, several competent—even brilliant—statues of saints and pieces of religious jewelry.  Though in some curves and ornamental flourishes of the altar, for example, one senses a peculiarly Malay element of joyously inexact symmetry, the pieces in this first category move clearly in a Western orbit.  They’re the products of the heritage of so many Filipinos, that 85% of the population—the Tagalogs, Ilocanos, Visayans, Pampangans, and others—who occupied the low-lying coastal areas and thus felt most directly the extraordinary domination of Spain and the U.S.

It’s the other 15% that’s kind of newsy.  Here are the southern Moro peoples (Maranao, Maguindanao, Tansug…), the tribes in Northern Luzon (Ifugao, Bontoc, Ilongot…), these latter largely situated in the Gran Cordillera Central, the 200-mile-long mountain range dominating Luzon and giving birth to virtually every river system on the island.  These people resisted—and resist to this day—Western domination.  Though most of Luzon’s mountain dwellers were originally coastal folk, they soon moved to the mountains, some directly because of Western pressure, some through more mysterious calls and urges.  Some, though claiming the mountains as home, carried on small wars with the coastal peoples and foreign rulers clear into the 20th Century.  The Ifugao, for example, were a particularly nagging concern to the Spanish, but campaign after campaign, military as well as religious, failed to subdue them—these headhunters, these savages.  The art from this 15% of the Philippine population: that will most likely cause stirrings in the deep recesses of the Philippine soul.  At least that’s what happened to me, and I doubt I’m atypical.

In the past the majority of Filipinos, if they considered these other tribes deeply at all, might have considered them as marginal, strange, sometimes pestering appendages to the main population, or perhaps as merely exotic spices in an overall mix dominated by their tastes, the tastes of the powerful, culturally sophisticated lowlanders.  Now, on a growing wave of apprehension that lowland tastes smack entirely too much of Coke, more and more Filipinos look at swords and wedding flags from the Sulu Archipelago, tube skirts from the Magindanao, textiles from the Ilongot, and wooden figures from the Gran Cordillera mountain people as profound indexes of hat they themselves were in the deep past, even before Magellan.

The exhibit’s arrangement encourages such connections.  The first object, said to be the most famous find in Philippine archaeology, is a burial jar found in Palawan and dating somewhere around 2000 B.C.  After a few more ancient pieces come the more numerous, more familiar pieces of the Spanish period.  Then come the pieces by the 15%, and one feels suddenly tugged back to the era of the burial jar, as if the long, rich, flowery Spanish period were an interruption to a style of artistic expression more truly one’s own.

I was particularly taken by a small Ifugao wood carving.  The statue, 16 cm. high, is of a sitting man, a hipag, a minor deity.  Reflexively, I saw it as one of the finest examples of Western, cubist, “primitivist” art I had ever seen.  It bothered me that I couldn’t shake these Western labels.  For this piece also spoke to me of a cultural identity so much my own that I felt the burden of those alien spirits lifting, the crushed substances of a distant native past springing to form.  There the hipag sits, right forearm rising so that left hand rest on left cheek.  The figure is representational, though figurative rather than realistic.  The head, too large for its body, sports an oval, almost heart-shaped, flatish face on which two small slanted slits high on the forehead are the eyes, and below a broad, nominally protruding nose, a small slit is the mouth.  It is a fitting answer to Rodin’s The Thinker.  The arms and back elongated, though: no rippling muscles allowed, and back straight, not bent over in an agony of thought.  The mouth, with an ever so slightly upward curve, could suggest a smile, or at least some winsomeness, as if the mysteries the hipag contemplates lead him more to acceptance rather than gloomy brooding.  Winsome as the whole figure is, however, its place in the cultural scheme is complex and sometimes dark.  Great power resides in the hipag when involved in rituals of violence and aggression.  It is, in fact, a war god ritually smeared with the blood of sacrificed animals when its presence is needed in battle, sorcery, or witch-doctoring.  Thinking of the carving now from a distance of several months, though, I see more and more possibilities of meaning.  That a winsome smile and the blood of violence co-exist so calmly, for example, could point to a less dualistic view of life, a view squarely opposed to the profound dualism of the West.

But most of all the hipag gave form to something we all search for passionately: something, anything, to call our own.

Around the hipag were larger Ifugao statues: the bulul, powerful guardians of the rice granaries.  Towards the exhibit’s end came the swords from the Sulu Archipelago, models of which—bastardized as they are—can often be found in Filipino homes, perhaps as a sign that amid the overwhelming evidence of profound Westernization there exists in the Philippine soul an uncrushable longing for a less dependent identity.  For me the hipag revived some ancient memory, one now residing in far mountain reaches but, strangely enough, strong enough to balance another, more familiar memory, that memory accidentally created when a barge ran aground too soon.  The General would have to wade ashore now.  That, I like to think, was why he was really scowling.

This entry was posted in Arts, Diversity & Multiculturalism and tagged Field Museum of Natural History, The People and Art of the Philippines. Bookmark the permalink.