When Mike Royko died in 1997, Chicago mourned.  Granted, a few of the many people he confronted in his no-nonsense manner may have secretly celebrated, but his death was seen by many as the end of an era, when newspaper columnists spoke their minds and weren’t afraid to offend the sensibilities of their readers.  As we bemoan our current era of fake news and incredible reporting biases, right and left, as we plead for fact-based journalism and a return to some greater measure of civility and sanity, it’s important to remember that this doesn’t mean there’s no place in journalism for strong opinion—often fiercely strong opinion.  “He wrote with a piercing wit and rugged honesty that reflected Chicago in all its two-fisted charm,” wrote Rick Kogan in “20 Years without the legendary Mike Royko.”  I know Royko would have come at this era of fake news with both fists swinging.  “His daily column,” writes Kogan, “was a fixture in the city’s storied journalistic history, and his blunt observations about crooked politicians, mobsters, exasperating bureaucracy and the odd twists of contemporary life reverberated across the nation.” 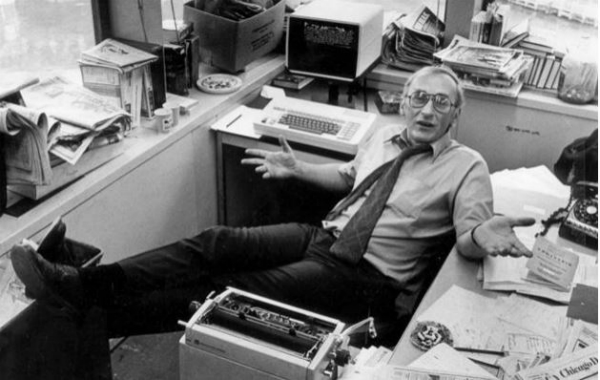 Kogan’s recent tribute starts by recalling the short, staccato conversations he had with another storied columnist, New York’s Jimmy Breslin, whom we lost on March 19th this year.  When Royko lay dying from a brain aneurism, Breslin would call Kogan every day for an update. On April 29th, 1997, when Kogan told Breslin that Royko had died at 3:30 p.m., Breslin said, “Goddam it.  Well, Goddam it,” and hung up.

It would be impossible to write about Royko without mentioning controversies and his detractors, like in 1996 when a thousand protesters “gathered outside Tribune Tower demanding that Royko be fired for what they felt were insulting portrayals of Mexicans in his column,” or when the famed Chicago priest and writer Andrew Greely characterized Royko’s writing as “crudity mixed with resentment.”

Nearly all of Royko’s books were collections of his newspaper columns, yet his 1971 Boss: Richard J. Daley of Chicago, which won the Pulitzer Prize for commentary, shows that Royko’s sometimes careless prose could truly shine when he was freed from the constraints of his daily assignments.  Writing in the New Republic, Roy Fisher wrote that in Boss, “Daley emerges as a complex mixture of integrity and debasement, of wisdom and stupidity, of vision and blindness, of compassion and brutality.”  Daley’s wife, Eleanor “Sis” Daley, thought the book was “trash and hogwash,” and, Rick Kogan writes, “When asked about his wife’s review…Richard J. replied with that characteristic grin, ‘She’s entitled to her opinion.'”  David Starkey and I included an excerpt from Boss in our book Smokestacks and Skyscrapers: An Anthology of Chicago Writing. 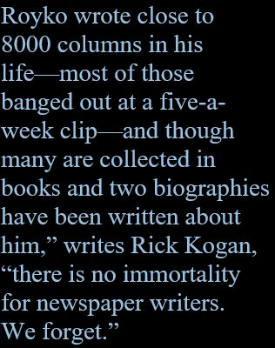 Royko, the son of saloon keepers, was born in a Polish neighborhood on the Northwest Side of Chicago in 1932.  He grew up among drinkers and fighters and, not surprisingly, some of his best writing is set in the city’s bars.  After a stint in the Air Force, Royko became columnist for the Chicago Daily News from 1959 until the paper closed in 1978.  He wrote for the Sun Times from 1978 to 1984, and finally, in a move that coincided with national syndication, for the Tribune from 1984 to his death.  Royko, whose higher education consisted of two years at Wright Community College, was always skeptical of intellectuals, seeing himself as a champion of the common man and a debunker of frauds.  His most famous alter ego was the tough-talking, cynical Slats Grobnik.

Still, he was a life-long Cubs fan.  He often ridiculed the “curse of the Billy Goat” excuse for the team’s failures and blamed owner P.K. Wrigley himself.  In fact, the Cubs were the subject of his very last column (read it Here), March 21, 1997, where he writes of Wrigley running, “…the worst franchise in baseball. And a big part of that can be blamed on racism.  If not Wrigley’s, then that of the stiffs he himself hired to run his baseball operations.”

Rick Kogan ends his tribute to Royko recalling his wife Judy’s reflections on Royko and the Cubs.

“‘The Cubs winning the World Series? There really are no words to describe what Mike would have thought, would have felt,’ says Judy. ‘He would have … I don’t have the words.’

“She can remember vividly the night when the Cubs clinched the 1984 division title. She and Mike watched the game at the Billy Goat Tavern. It was jammed, and after the victory, people, strangers mostly, approached Mike to exchange high-fives. Quietly, gently, he grabbed Judy by the hand and led her from the bar, up the stairs and out onto Hubbard Street. She thought they were headed home. Instead he took her in his arms and they started to dance.

“‘We were there, alone in the middle of the street, just twirling in that strange, otherworldly light,’ she says. ‘We were so happy.'”

“The following morning,” Kogan concludes, “he was back at the paper writing his column because that’s what he did.”

♦  Go to a list of Chicago Writers, and to the Smokestacks and Skyscrapers page, where you can also BUY the book.

One Response to Mike Royko: Controversy…and the Cubs