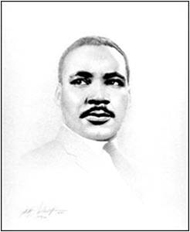 On April 4, 1967, Martin Luther King, Jr. delivered a speech at New York’s famous Riverside Church.  Giving it the title “Beyond Vietnam—Breaking Silence,” King called for “radical departures from the destruction of Vietnam.”  He had been moving towards this speech for two years, “[M]oved,” he said, “to break the betrayal of my own silences and to speak from the burnings of my own heart.”  But over those two years he faced resistance, perhaps most strongly from many of his own supporters, who urged him not to join those protesting the Vietnam War.  It would, they felt, endanger his drive for Civil Rights—and, in the short term, they were right.  The day after the speech the Washington Post declared that King had “diminished his usefulness to his cause, his country, his people,” and Time magazine denounced him as a puppet of Hanoi.

From this distance we now marvel that his supporters did not see a connection between peace and Civil Rights.  King, however, saw not only the connection between these two clearly, but to one more thing as well. He called for a “Revolution of Values,”  saying, “When machines and computers, profit motives and property rights are more important than people, the giant triplets of Racism, Militarism, and Economic Exploitation are incapable of being conquered.” Perhaps—perhaps—we have gained some insight into the connection between Racisim and Militarism, but it seems we are only dimly beginning to grasp an important economic connection.  “A true Revolution of Values,” said King, “will soon look uneasily at the glaring contrast between poverty and wealth…and say ‘This is not just.'”  If we are beginning to feel uneasy about the corrosive effects of the enormous, growing wealth disparity in the United States—greater today than at virtually any other time in our history—then we can say we’re only about 46 years behind King’s vision.

Eerily, on April 4, 1968, just hours before the exact moment he began his Riverside speech a year earlier, King would die on the balcony of the Lorraine Motel in Memphis.  The year left to him after Riverside was discouraging.  His power to move large segments of the people of his day would never be quite the same.

On April 16, 1967, King delivered a sermon at the Ebenezer Baptist Church in Atlanta, a pulpit he shared with his father.  Based on the Riverside speech he had given 12 days earlier, and now called “Why I Oppose the War in Vietnam,” the sermon is, in my view, one of the greatest, stinging, prophetic sermons of all time.  Miles away from the warm fuzzies we now feel when we hear “I have a dream,” this sermon—in retrospect perhaps his most courageous statement—deserves to be heard as the truest counterpart to his iconic speech. 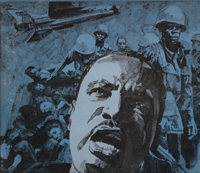 In 1970 Motown Records, under its Black Forum label, had released the record Dr. Martin Luther King, Jr.—Why I Oppose the War in Vietnam, produced by Junius Griffin, and with a wonderful black, blue, and white cover by Curtis McNair.  I found the record about fifteen years later in a cut-out album bin in Chicago, and had been listening to it a lot as our nation made its frenzied run-up to invading Iraq, a move so many of us felt was wrong for so many reasons.  The WMD argument seemed weak at best, and we realized that invasion would further destabilize the uneasy balance of Sunni and Shi’a, a present-day imbalance that has caused endless misery and threat.  An Afghani professor, visiting one of his relatives our family foundation, Bryan House, had helped, begged me at dinner one night to tell the President—as if I really had that kind of voice—not to go adventuring into Iraq but to stay and help Afghanistan truly rebuild.  “You will,” he said, “be compromising the futures of two countries.”

But any counter voices seemed so feeble, and the few actual street protests so thin compared to Vietnam protests.  Of course, there was no time to get anywhere near as big.  We blinked and were suddenly at war again.  Feeling the inevitability of war, the ineffectualness of protest, I somehow found the record of King’s sermon again and listened to it over and over.   Daniel was home a lot at that time, too, and began listening as well.  One day I heard him playing his unique brand of blues and folk as he listened to King’s sermonizing.  Just days before, I had taken samples from the sermon and been layering them, and when I heard Daniel’s music, I knew immediately how well it would fit underneath it all.  The resulting four-minute song managed to capture, I feel, the essence of the 45-minute sermon.  With war coming, I knew it wasn’t much, but was still something at least.  Today it can continue to remind us of how much a prophet King truly was, and how his day should be viewed less as a holiday and more as a reminder of how far behind him we still are.

We first played the song on February 12, 2003, at a reading organized at North Central College by my colleague Dr. Jennifer Jackson.  The event—part protest against our looming intentions in Iraq and part in reaction to the White House’s cancellation of a celebration of American poets—was called “Poets Against the War.”

Below is what part of Melissa Franic’s report looked like in the Naperville Sun on February 14, 2003. 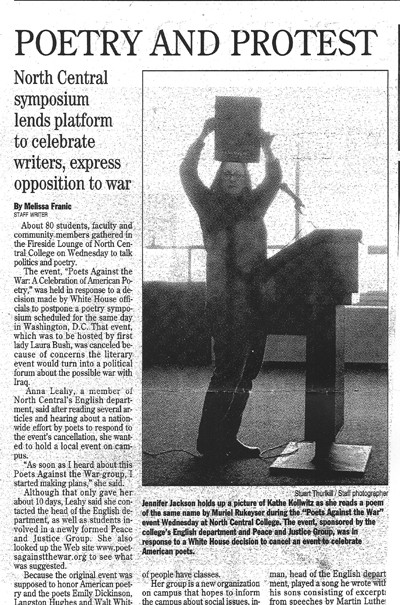