This morning after returning from my college’s 7:00 a.m. annual Martin Luther King, Jr. Prayer Breakfast I was struck by two stories that came across my Twitter feed.  The first was a short compilation from the New Yorker of some of its covers featuring MLK, Jr., including this one of him trying to hail a cab: 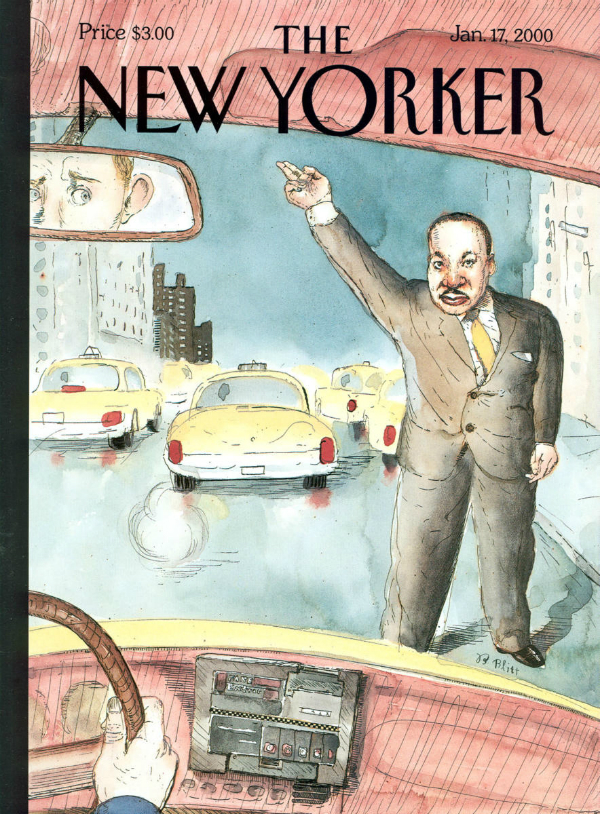 The second, from the Evanston Review (a Chicago Tribune subsidiary), carries the headline “Man at center of video, excessive force lawsuit ‘should have been allowed to go his way:’ attorney.”  A lawsuit filed October 11, 2016, in Cook County circuit court, asks $50,000 for “compensatory and punitive damages, fees, costs, and such other relief” on behalf of Lawrence Crosby, a Northwestern University doctoral student, a black man, who was pulled over by Evanston police responding to a call “from a woman who said she believed the car he was driving was stolen.”  It wasn’t.  It was his own, police confirmed. Yet he was “subdued” and arrested anyway.  You can read the full story Here, which, at this posting, also includes the police dash cam video.  Here’s a still from that video:

This isn’t a full analysis of a situation—a situation which does, however, seem to have many parallels, especially pronounced in Chicagoland these days because of the recent release of a scathing Department of Justice report on racism in the Chicago Police Department. On this national holiday it’s common to acknowledge—the phrase is a cliche—that “we have a long way to go to realize Dr. King’s dream of equality.”  These two images just struck me this morning as so, so similar, and made the phrase, once again, not so cliche after all.

♦  Hear a Richard and Daniel Guzman music (and video) treatment of MLK, Jr.’s “Riverside Sermon,” perhaps the greatest, most courageous of all his speeches.  Against even his closest advisers, he began joining the struggle for Civil Rights to the struggle against the Vietnam war, and identified “racism, militarism, and economic exploitation” as standing in the way of equality.

♦  Read more about MLK, Jr.’s “Riverside Sermon” and his thoughts on racism, militarism, and economic exploitation.