The following article originally appeared in The Virginia Quarterly, Vol. 60:1 (Winter 1984): 102-118.  Widely considered one of the best single articles on Gonzalez and Philippine culture, it has been widely reprinted, including in a University of the Philippines commemorative box-set of Gonzalez’s work, and in Asian American Writers, a collection by Yale University’s Harold Bloom of what he considered the best 15 contemporary articles on Asian American writing.  When Gonzalez himself read the piece he said, “It’s about time someone got around to reading The Signs!”  For more on Philippine culture from a widely different angle, one that contradicts some of Gonzalez’s efforts, go to an article featuring the pop duo of Pops Fernandez and Martin Nievera.  Read about Kipling’s famous poem “The White Man’s Burden,” written to encourage Americans in their takeover of the Philippines.  In “The Empty Center…” I put Gonzalez in a larger context of Filipino writers and of globalization.

Everything, then, can be a myth? Yes, I believe this, for the universe is infinitely fertile in suggestions. —Roland Barthes 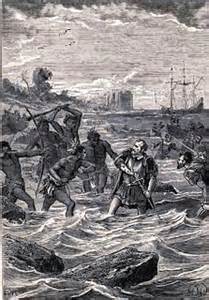 Magellan made his fateful landfall in the Philippines at Cebu on March 16, 1521; and, with the signal exception of his slaying some six weeks later, it has seemed possible to read the bulk of Philippine history as a series of capitulations. Politics became Spanish, religion became Spanish—the Islands were an Archdiocese before 1600—and in 1850 when, to ease tax-collecting problems, Governor-General Narciso Claveria decreed that all indios be given Spanish surnames, even names became Spanish.  One of the Philippines’ greatest modern writers, Nick Joaquin, has said:  “…there is as great a gulf between the pre-Spanish drift of totem-and-taboo tribes and our present existence as one people as there is between protoplasm and a human creature. The content of our national destiny is ours to create, but the basic form, the temper, the physiognomy, Spain has created for us.”  Yet I wonder if even Joaquin believes form and content to be so separable.  And what of the Americans, who accomplished in just over half a century a transformation of Philippine culture perhaps more spectacular than Spain managed in just over three and a half?  In 1900 the Partido Federalista, the first political party organized under American jurisdiction, had as one of its planks eventual annexation to the U.S.; and in general Filipinos so embraced American ideals that Americans found it natural to refer to them as “little brown brothers.” So far the most successful Filipino fiction writer in America has been Carlos Bulosan, whose 1946 best-selling autobiography was entitled…America Is in the Heart. Naturally, then, many Filipino writers have long been haunted by the sense of a buried, perhaps irretrievably lost native past. In the December 1940 issue of Philippine-American News Digest, journalist P.C. Morante wrote: “In myself I am often at a loss to account for the genuine native. To be sure, I have the physical quality of my race; but I feel that the composition of my soul is thoroughly soaked with the alien spirit. Of course . . .a great number of my people . . .are aware that even their virtues are borrowed and that their thinking, their dreams and their aspirations have been influenced so much by American and Spanish ways that the indigenous substance of their true being has been crushed or lost. . .My actions and reactions, my thoughts and ideals, even my complexes and inhibitions—all this seems to revolve around a foreign pattern that is easily recognizable as intrinsically of the West.”

On the other hand, N. V. M. Gonzalez writes in a recent letter:  “At the moment. . . I’m reading history and a whole ton of it. I can say with some sense of responsibility now that the Filipino today has not changed from the way he was circa 1400!”  He is an optimistic man.  Born in Romblon, Romblon Island, on Sept.8, 1915, he turned before his twenties from the study of law to the life of writing, first as a staffer at Manila’s Graphic Weekly. Some of the early years are recounted in his first novel, the autobiographical Winds of April (1940), and his turn to writing in “On the Eve,” the story which begins his latest volume, Mindoro and Beyond (1980).  Believing in the efficacy of storytelling and the power of the past, especially of childhood, Gonzalez has, amid heavy demands also as an influential editor and teacher, produced a body of work that has won all his country’s major honors, been translated into several languages, and shown him worthy of being considered among the finest English prose stylists to have come from the Third World. He also makes guitars. In 1974 he found an old, broken guitar in a junk shop and bought it for $1.50. His account of the incident in a newspaper article titled “Reflections on an Old Guitar” is worth quoting at length. “Some five hours and a half later, along with a roll of paper towels, a couple of brushes, and a quart of denatured alcohol, the box began to reveal its worth. To be sure, we recognized its mark, “C. F. Martin & Co.” branded on wood in 12-point caps, sans serif, followed with “New York” similarly imprinted on the cross grained center lining of the back. A check with the published records of this maker showed that it was the practice of this firm to place its brand name in two places as well: on the block that joins the neck to the body; and on the back, where the heel joins the body. Our cleaning job revealed that all but the letters ‘C’ and ‘N’ of the firm name, and the ‘K’ in ‘New York’ had been scraped away. . . . ‘For this,’ said the proprietor of a music shop we visited, ‘I can give you a real classic guitar, and some cash besides.’  Forthwith, he took from the rack a signed Yairi guitar worth four hundred dollars…but of course, we had to decline the offer…. Now the responsibility of owning a gem like this one involves not so much material values but ethical and artistic ones. We decided, for example, to undertake the restoration job ourself. …But what were we now to do about being faithful to the guitar’s original appearance…. What songs it must have strummed to, no one can tell, but the ivory fingerboard remains to this hour a small monument to perfection.  An ambitious repairer had wanted to protect it from wear by varnishing it, which, of course, had been a blasphemy.  We had to remove the coat with care, revealing a board on which minor chords had been much favored, judging by the rubbings of the fingertips on the ebony.”

Now, the Philippine past is, as it were, the battered guitar.  So many things irretrievably lost, it’s true; but Gonzalez’ intense, patient devotion to detail and history has seemed to strip so many colonial overlays, to reveal clues—some as subtle as the rubbings of fingertips—but powerful enough to impel the ethical and artistic urge to restore.  Gonzalez says he has even found a transcendent reason for the Philippine peasant’s seemingly easy acceptance of his landlord’s usury:  “The acceptance of the practice [of doubling unpaid debts], I now seem to understand, was (and is) not traditional but transcendental. For exactly the same practice was observed in pre-Spanish Philippines, the logic of those times being this: that when a measure of rice was planted, harvest rewarded the effort at the least a hundredfold. The ‘dublihan’ practiced then was actually generous. It is this sense of generosity that appears to have transcended time. . . Perhaps it is the nobility of the peasantry that has allowed its members to acquiese to the practice . . .and the gentry’s sense of guilt that has led it to devise other means of exploitation.”

He is, as I have said, an optimistic man. Yet under the continuing scrutiny of sociology, anthropology, and history a unique—and, yes, “transcendent”—Philippine past is rapidly disclosing itself; and the Philippines even possess, after all, a somewhat respectable, if fragmented, revolutionary tradition complete with mystic overtones and fiery, colorful leaders who moved their people to stand against a multitude of foreign indignities.  Gonzalez’ optimism is not, in short, mere optimism.  It, too, is severely tempered by that dark sense of loss and concession that haunts the best Filipino writers.  But in most instances Gonzalez is able to balance cultural pessimism and personal optimism so tightly that his works are generally, though not completely, free both from the facile hope and melodramatic romanticism that otherwise plague a literature so obsessed with its people’s lost identity.  Furthermore, while he is a master of high drama, Gonzalez’ very prose style works against the overly dramatic, the imbalanced. “Every volume since Gonzalez’s first,” writes the American critic Leonard Casper, “is so noticeably underwritten that he runs the risk of being misread, of having subtleties overlooked, of leaving unmoved those readers used to bathos.”  Such restraint is the product of a vision which blends detail and history with pattern and cosmos.  Gonzalez’ narrative style intends to deemphasize the forward-moving, the linear, in favor of a complex, often near-static time frame, a frame which seems to shimmer gently as Gonzalez moves easily, with minimal transitions, between past, present, and future, between conscious time and the less-metered times of memory, dream, hallucination, or reflection.  In turn, this handling of time makes more natural the creation of confluences between the realm of myth and the minutiae of daily living.  Besides its restraint and complex timing, what typically impresses the reader of Gonzalez’ work first is its abundant and lovingly given detail.  More than any other Philippine writer, Gonzalez concerns himself with names, with the building of houses, the catching of fish, the harvesting of rice, the sharpening of knives used in that harvest.  Then in the midst of detail will often come a kind of time warp making us realize that certain facts, certain rhythms of action, somehow rise from some ancient memory, some cosmic pattern, and, more important, have the potential of connecting us to those things from which they arise. Gonzalez’ best works are thus significant ventures in mythmaking, or, more precisely, countermythmaking.  For a society establishes meaning and interprets its history by dint of its myths, those signs and stories which seem to it to be immemorial; and it is the seemingly timeless, dehistoricized, depoliticized naturalness of myth which creates the illusion of naturalness in any given social order, any given history.  Myth, then, is a kind of metahistory, the very premise of historical constructions.  In essence, the writer who proposes really to “re-vision” history must offer us a countermyth, must select new facts, images, actions for elevation to a transcendent plain or create narrative contexts in which old material takes on new meaning.  It is in countering the myths of the Philippines’ irretrievably lost native past, of her people’s weakness, of the near-total triumph of the foreign that Gonzalez’ fiction is unique.  Such countering is most beautifully realized in A Season of Grace, his masterpiece, and surely one of the four or five most beautiful novels to have come from the “Third World.”

♦  Read PART 2 of essay.  Go to the lead post on my course The “Third World,” to World Writers, and to the Teaching Diversity main page.