Not As Divided As We Seem? 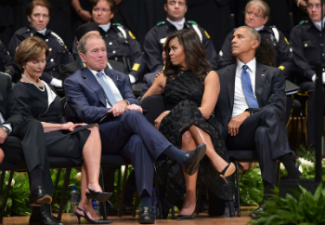 Are we, as President Obama said at the memorial for fallen Dallas police officers, “Not as divided as we seem”?  On the one hand, I see more and more whites at protests over police shootings of young black men, and recently a white woman has been walking miles everyday on Chicago’s Southside wearing posters saying, “Black America, I’m sorry.”  Also, as the President has said on many occasions, at the local level more of us are working together and to more effect than in Washington.  It’s not very hard to top D.C. gridlock, however, and on the other hand, there seems to be much more evidence—including Michael Brown in Ferguson, Freddie Gray in Baltimore, the church massacre in Charleston, Philando Castile in St. Paul, etc. etc. etc.—proving the opposite.  Bill Bishop’s book The Big Sort analyzes a growing divide as Americans cluster into less diverse neighborhoods.  The book’s subtitle is Why the Clustering of Like-Minded America is Tearing Us Apart (go to the book’s website for more).  On this site, in “Graphic Inequality,” I comment on the greatest wealth divide in American history.

I often teach courses on race and ethnicity, and every time it seems racial incidents explode, making sometimes discomforting material even more disturbing.  This past Tuesday I opened my Race, Ethnicity, and the American Experience class by letting everyone talk about the week’s explosive events in Baton Rouge, St. Paul, and Dallas.  A student had already written me a long email on how police needed more education, and I had replied that they needed to take a clue from the military’s no-tolerance policy regarding racism.  Two veterans are in the class.  “You’re in big trouble if there’s even a hint of racist behavior,” said one.  “I know this is going to sound crass, and I don’t want you to take this the wrong way,” said the other, “but I was kind of proud of how the Dallas shooter handled himself.”  The shooter had also been a veteran, and the student’s point was that besides more anti-racist training the police also needed better training on how to actually handle guns.  “If you watch the police,” he continued, “they didn’t seem to know what to do compared to the vet.  He’d been well trained.  And if you look at the officer in Minnesota, he’s out of control, out of his mind with fear and has no idea how to act.”  This was a sharp take on a problem I’d only dimly considered before.  None of our discussion, I should add, was in the spirit of wholesale condemnation of police.

Many of these issues were touched upon in an episode of PBS’s Tavis Smiley show, which I happened to watch immediately after returning home from this class.  It was an interview with professor Robin D.G. Kelly and Civil Rights lawyer Connie Rice, which, for the moment, you can watch HERE.   Kelly spoke of “colorblind racism”* and said of  Obama’s comment, “Not as divided as we seem? What country is the President looking at?”  Rice told about interviewing 800 L.A. police officers.  After they got comfortable and realized she wasn’t going to use anything they said against them, officer after officer admitted how scared they were of black people, how little they knew, how they’d never sat down to share anything with a black person.  Fear, lack of personal relationship, firearms—this is a sure-fire recipe (pun intended) for all the tragedies we’ve seen.  Unless things change—starting with ditching colorblind racism and getting our police more training—these incidents will continue to multiply into our future, clouding and disheartening it just as they have clouded and disheartened decades and decades of our past.

* I have written much about how the doctrine of colorblindness sustains racism, disabling our ability to deal with it.  See, for example, articles on Trayvon Martin and on Peg McIntosh’s “Invisible Knapsack.”