Every summer I post an excerpt of a journal I keep called Climbing Bryan’s Mountain.  But climbing the mountain most people call Bell Rock has been harder the last three years.  My first climb was delayed by weeks because of, in 2019, a hard re-hab job, then, in 2020, because of our pandemic and my wife Linda breaking her ankle.  But this year I didn’t climb it at all.  Not once. 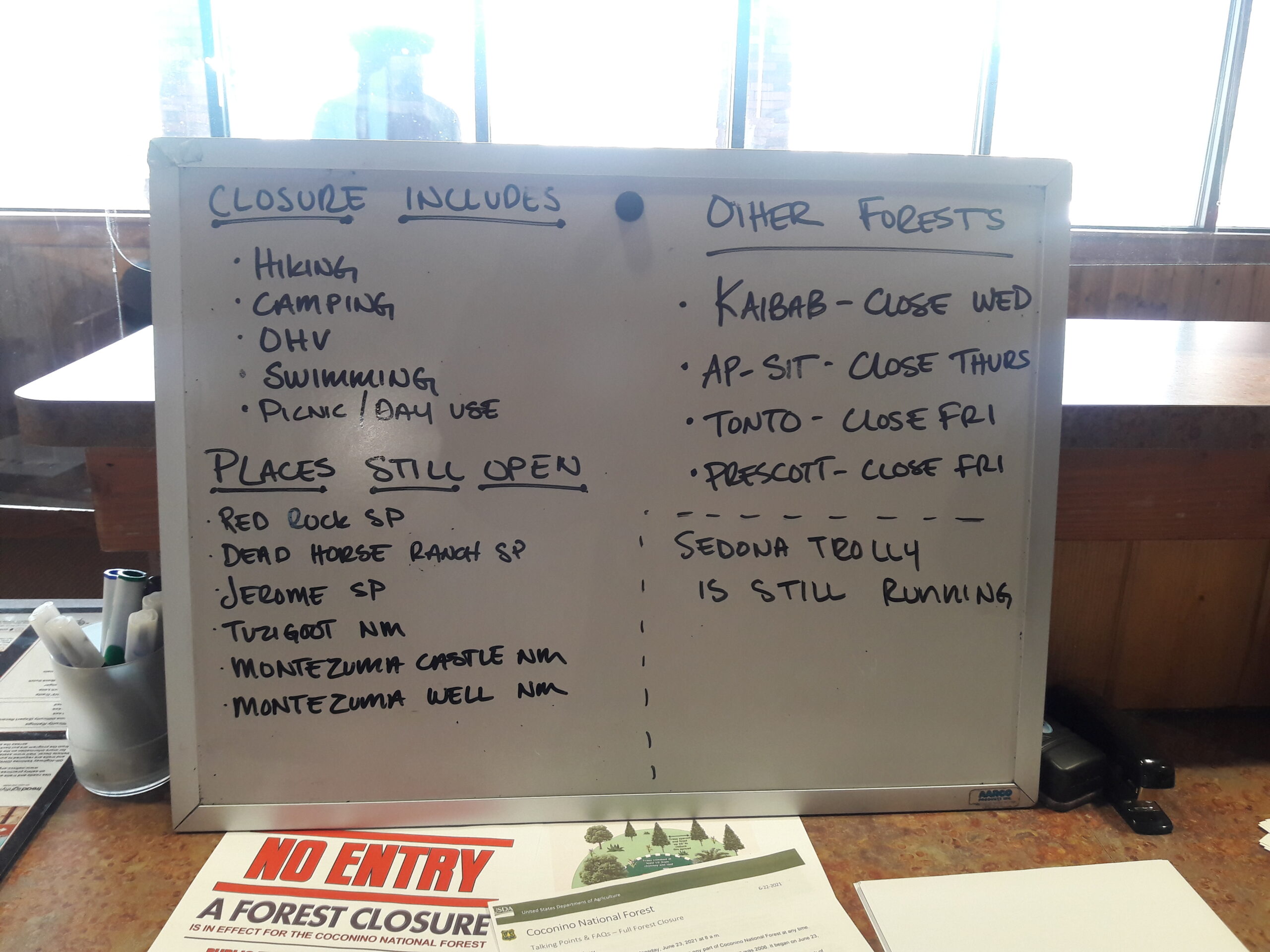 The Video below compresses our eight-day stay in Sedona, AZ, this summer down to about 2 minutes/15 seconds, but the picture that stays on the screen longest is a white board we found at the Ranger Station just two miles south of our place.  This year Mike and his boys and his girlfriend Zoe joined us (Josh did, too, later), and the Ranger Station is a beautiful introduction to the Sedona area.  I also wanted to buy a Red Rock Pass so we could park at the various spots we wanted all of us to visit.  “Can’t buy one,” the woman at the reception desk said.  “What?” “Everything’s closed.” “What? Can’t go to Bell Rock? Red Rock Crossing?” “No, I’m afraid not. It’s the drought and the extreme wildfire danger.  There’s thousands of acres burning just over there and there and there,” she said, gesturing almost 360 degrees. “You can come back here behind the counter and take a picture of this board telling what’s open and what’s not.” I did, it’s above, and all the time I just kept thinking, “What?”  We’d kept track of the weather, which had kept the high country in extreme heat for days, almost rivalling Phoenix’s valley heat.  But that heat wave had just broken the day before we arrived on Saturday.  However, at 6:00 p.m. Friday the wildfire danger had increased so much that much Federal Land, including all of the Coconino National Forest, had been shut down.  The beautiful picture I took of Aaron and Grace at Red Rock Crossing kept flashing through my mind, and Linda and I grew sad that we’d been shut out of all that beauty.

There was plenty to do, though.  The video shows our first stop at an In-N-Out burger where Maddy pasted their sheet of stickers all over his face.  The Ranger Station with its white sign board. Catching lizards, which run everywhere at our place.  (We were in the pool lots, too.)  A visit to Tuzigoot National Monument. The Out of Africa wildlife park, where it’s always a treat when the giraffes come by your open-air trolley. Hiking at one of the only two State Parks still open, Red Rock State Park.  Pulling over at one of the area’s great overlooks on our way to hitting The Canyon, and hiking down Bright Angel Trail a ways.  Then Jerome, the arts city clinging to a mountainside, where, watching a potter do his thing, Maddy said, “I didn’t know you could do this for a job!”  The video ends with us going down Highway 17 back to Phoenix—and seeing a wildfire break out right in front of us.  Mike and Zoe had a flight out early next morning, so we hoped the wildfire wouldn’t jump the highway, as one had done last year.  Shortly after we got to the airport ourselves, Mike sent a video of it RAINING in Sedona.  “You’re part of a huge celebration,” I texted back.  July and August is monsoon season, but things probably won’t open up til September 1st, even if it’s a great monsoon.

Not being able to take all of us up to Bryan’s Tree on Bryan’s Mountain was a deep loss for me.  In Part One of my 2019 excerpt, I put a picture that Mike had taken of Bryan when they had climbed the mountain nearly 20 years ago. I wrote in a recent piece about the increasing politicization of climate change.  We wrangle now more than ever, when, as more and more people are saying, we need to stop arguing so much about what causes climate change and just deal with the effects right in front of our face: colds that are colder, hots that are hotter, droughts that are drier for longer, rains that pour down more floods, California and Arizona burning, while Louisiana and the Gulf drown.  It’s that cliche: the new normal.  Will the wilderness, the great hikes, the great vistas all around Sedona and the West just have to be closed more and more often?

In my 2020 excerpt I focused on the bumper crop of pine cones Bryan’s Tree had produced that year, but wondered if it was a sign of distress, not health.  This year there were trees and bushes dying all around us in the heat and drought.  I wonder if his tree has survived at all.  I’ll have to wait and see.