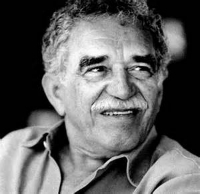 Many years later, as I write about Gabriel Garcia Marquez, I remember that distant afternoon when I faced the man from whom I stole my first ideas about teaching writing.  Perhaps Marquez would find it amusing that in writing about him here, I write about him hardly at all, but only about two documents about him: one from the man I stole from, the other from a man who handed it to me with a dissolute air then, like Melquiades, disappeared, never (unlike Melquiades) to reappear, at least to me.  Perhaps these documents will help you decipher Marquez…or not.

♦  Go to a seminar paper on Marquez by William M. Thornton. 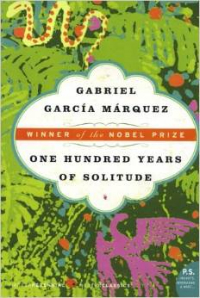 Here is how I came into possession of these manuscripts.  You may skip all of the following explanation.  Only note that Thornton’s piece contains a strong tone of “progressive-ism,” such that “later” forms of thought are sometimes implied to be “better” than “earlier,” more “intuitive” forms of thought.  True, much of the excitement of 100 Years of Solitude comes from the clashing of intuitive vs. empirical thinking, something Mr. Thornton explains well.  It’s not true, however, that there’s a strict line dividing intuition and empiricism—intuition as often as not being the catalyst for discerning what we need to be more empirical about, intuition often being the “magic” in “magical realism.”  But I digress from starting my digression.  Again, you may skip it totally with no consequences whatever.  I came, as I was saying, to possess these two documents these ways.

Document 2.  He signed his seminar paper: “Wm. M. Thornton.”  Perhaps ENSP 355: Society and Revolution in the Novel was a graduate or upper level course at the University of Virginia, where we were both doctoral students in English, though I wasn’t in this class, and how I myself got into Virginia, I’ll never know.

It may have been because I aced the Graduate Record Exam.  “This is the second highest score I’ve ever seen,” exclaimed professor Douglas Peterson, chair of English at California State University, Hayward—now called California State East Bay, but many years ago referred to lovingly as “Hay U.”  I got my masters there, and also my first teaching gig, which is where Richard M. Eastman will come in below, many words later.  “The second highest,” he repeated wistfully.  I attribute this solely to my being totally unprepared and therefore totally relaxed, a man who, having spent nothing, had nothing to lose.  I took the test on a distant Saturday many weeks before prof Peterson’s exclamation, but had only remembered the Thursday before as I looked at my calendar late in the evening trying to decipher my notation for Saturday, which read only “Take Test.”  Noting the certain futility of cramming for a mystery test only a day away, I decided not to study at all, arriving at a GRE test-taking site totally fresh, not a second of study time weighing on my mind.  It was a game, a lark, a crap shoot.  “The second highest ever,” prof Peterson whistled again, but when I got to Virginia my monumental lack of preparation started showing.  I had read only one Dickens novel, nothing by Joseph Conrad, and maybe three or four Shakespeare plays.  Shocked, the department arranged a Ford Foundation Fellowship for me so I wouldn’t have to take classes for a semester, embarrassing myself irremediably.  It seemed like throwing good money after bad, but I chirped, “Super. What do you want me to do?”  “Read” was all they said.  And “Hey,” I kept saying to myself during the next months, “some of this stuff is pretty good!”  I even plowed through Anna Karenina, noting with some surprise how sad I was to have this 1200 page novel end.

The foundation for my lack of knowledge had been laid years earlier as an undergraduate at the University of California, Berkeley, where in the late 60’s and early 70’s the school was struck and closed at least four times by student protests.  (You can read a beginning sketch of some of these times Here.)  We seemed to be in the streets as much as in class, which was the case when I got a chance to study Shakespeare with L.C. Knights, an iconic figure in Shakespearean circles.  Three weeks into the term protests erupted and Knights arranged for the class to meet in a church basement a few blocks away.  We tried it a couple of times, but at the end of week four he simply gave us all B’s and dismissed the class.  To this day all I remember about Shakespeare in college is L.C. Knights thundering, in his totally British way, “When I think of him, all I can say is BLOODY LECHER!”  I think he was referring to Shakespeare’s Richard, but I’m not sure. 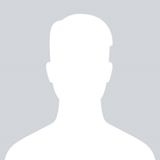 Many years later, when I actually started taking classes at Virginia, I was a little surer, and in one of my first classes happened to write a paper that gained some notoriety, though I don’t remember now what it was about.  “I heard you wrote a terrific paper!  Congratulations,” the acknowledged kingpin of Virginia’s English graduate students said to me a few days after I’d turned it in. He wasn’t even in the class, as several others who congratulated me were not.  One who actually was said he had read it and didn’t think it was that hot, but how he came to read it I don’t know.  I didn’t turn it into him and don’t remember reading anyone else’s paper.  I stood in awe of this academic gossip mill, and then suddenly Wm. M. Thornton, who also wasn’t in the class, stood before me.  “I thought, given the notoriety of your recent paper, you might be interested in this.  Here,” he said, holding out about 20 stapled pages, “you can have it.”  That dissolute air I remarked earlier, that air I now associate with Melquiades in his decline, imbued his words, his motion of handing me his paper, even his gait as he walked away.  Where he is now, I don’t know.

Document 1.  Many years ago as I faced my first class of college students for the third time, I remember thinking, “I’ve got to figure out what I’m doing.”  On Monday I had dismissed after calling roll.  I had lasted maybe seven minutes.  On Wednesday, day two, I managed to stretch things out to maybe 15 minutes, handing out a paper that may have been a rough syllabus.  In college the toughest course to teach, hands down, has got to be Freshman English.  Compounding this is the fact that since, understandably, profs usually want to stop teaching this as soon as they can, they give these courses to the least experienced teachers, usually graduate students.  Many years ago when I started teaching, classes in pedagogy—how to teach—were virtually non-existent, so we faced the toughest class with both no practical experience and no how-to instructions whatever.  I don’t know how many minutes the third class on Friday lasted because all I remember thinking was, “How did I get here?  I have no idea what I’m doing.”  So dismissing after what I hoped was at least 20 minutes, I rushed to the library to look for books about composition, finding, after a couple of hours skimming dozens, a book called Style: Reading and Writing as the Discovery of Outlook by one Richard M. Eastman, professor of English and dean of the faculty at North Central College, Naperville, IL. 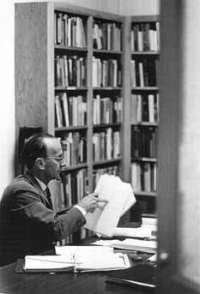 Many years later as I faced the search committee at North Central College, I remembered that distant afternoon when Wm. M. Thornton walked away forever, and I realized I was facing someone else who had haunted me for years.  Richard M. Eastman was on the committee.  “Dr. Eastman,” I found myself saying, “I know your work well.  In fact, I admired your book Style so much it was the first book I stole from liberally.”  He was not amused.  Perhaps his silence resembled, dimly, the silence before a firing squad pulls its triggers.  “Here’s someone I have to watch,” I thought I heard him thinking, and he did watch me closely for many months, after which a copy of his Style book showed up in my mailbox signed, “For Richard Guzman – in warm admiration of a fellow man of letters.  – Richard M. Eastman.”  I knew I had made it.  And even more so a few weeks later when he asked, “What would you recommend I be reading right now?”  “100 Years of Solitude,” I offered.  A week later the document you now have showed up in my mailbox with a note saying, “A copy of notes I make whenever I read something important. Perhaps you will find them useful.”  Many years later, I still find them amazing.

♦  Go to a list of World Writers on this site, or the Writing main page.