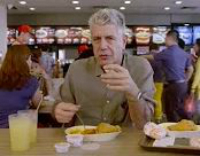 Bourdain at a Jollibees in Manila.

I think it deserves to become a Christmas classic—a weird one, but nonetheless a classic.  The VIDEO below stiches together about 10 minutes of clips available on YouTube from one of the best episodes the late Anthony Bourdain ever did: his show on Manila, the first episode of Season Seven of his Parts Unknown series.  Being Filipino, I know I’m biased in thinking it’s the greatest show he ever did.  The video below focuses on the insane fast-food franchise Jollibees, on OFW’s (Overseas Filipino Workers), on cover bands (a significant segment of OFW’s), and on one particular OFW: Aurora, a woman who lived overseas for over 30 years, and as a nanny for many of those years raised one of Bourdain’s directors. 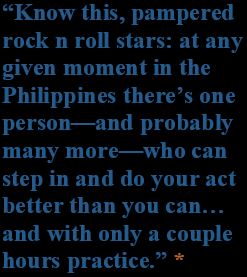 What’s left out?  A segment on Sisig, a classic Filipino street food (a hash of pig ears and jowls—Bourdain just calls it “pig face”—garlic, and a raw egg on top) that started trending world-wide after this show; a segment on Halo Halo, a crazy mix of milk, beans, fruits, gelatin, etc. (the name just means “mix-mix”); and segments on Christmas, and Christmas parties—because the Philippines is absolutely the most Christmas-crazy country on earth. Celebrations begin September 1st, when everybody starts saying “Merry Christmas” to each another, and stores rev up, as do actual Christmas parties.  Most of all you won’t see all of the last segment with Aurora, her family, and Bourdain (about which, more soon).  So everyone—I mean it!—should just buy this episode on Amazon Prime, or Netflix, or wherever, and start a family tradition: watch it at least once every Christmas, starting September 1st, if not more.  It will probably cost only $1.99 for an HD version. 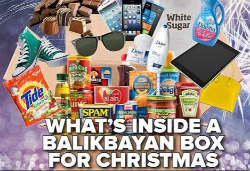 One of the first things Bourdain says is, “Filipinos are, for reasons I have yet to fathom, the most giving people on earth.  Think I’m talking shit?  Keep watching.”  On first viewing, what you’ll watch seems to be a jumble of weird images: postal workers struggling with huge boxes; crazy office Christmas party games; kids swimming in the Bay and playing street basketball; a traffic cop in a Santa suit directing traffic with sensational dance moves while a typhoon pours down rain;  priests wildly sprinkling holy water on people pouring out of churches.  Yet the show has a wonderful, well-crafted arc.  Those huge boxes you see near the very beginning are the famous Filipino Christmas boxes, Balikbayans, tens of thousands of them, stuffed full of items by OFW’s and sent home to those left behind to say, “I’m still out here.”  They’re stuffed with mostly day-to-day items that, as Bourdain says, “You’d just give to loved ones as a matter of course if you weren’t half way around the world.”  These boxes show up big at the end as Aurora and her family exult over a Balikbayan from Albert somewhere in the U.S.  My first cousin Rhoda and husband Roldan Rosas: they’re only a couple thousand miles away in Hayward, CA, where I did most of my growing up, but every Christmas a box shows up stuffed with lots of chocolates and pistachios, and every year I think: It’s our own little Balikbayan tradition!

The cover bands?  That’s their ambition: to go abroad, hopefully hitting it big by playing, say, Las Vegas.  For most OFW’s, however, it’s not an ambition, but a hard, often bitter, only option.  Which brings us back to Aurora.  “I’m 100% the man I am today because of Aurora,” writes Bourdain’s director.  “She’s influenced literally thousands of people around the world with her joy.”

Anthony Bourdain always gave us great TV— well written, well shot, well crafted, often important.  As in the Jollibee scene you’ll see in the video below, his outsized personality was at the center. Funny, irreverent, snarky and snobbish—he was the prototypical wise guy, tough but with a heart of gold, sometimes a very  tender heart of gold.  And never so tender as in this episode about Manila, which shows him at probably his widest range of feelings of any of his shows.  Early in the Aurora segment, Aurora sings snippets of “Of Holy Night” and just made up stuff about how she hopes everybody’s going to love the kari kari stew she’s cooking.  But as the program comes to a close she’s singing “Edelweiss,” with that line particularly pertinent for OFW’s: “Bless my homeland forever.”  After a lifetime away, “Her children,” says Bourdain, “now middle-aged, are finally getting to know their mother.”  Her solo voice makes her children cry and serves, too, as sound track to scenes of OFW’s leaving their families.  And when the camera closes in on Bourdain’s face you see he’s smiling, but on the verge of tears, just barely holding it together.  You’ll never see the wise guy that close to losing it in any other episode.  It’s one of the great moments of his legacy: him realizing that he really wasn’t talking shit after all.

♦  Go to Reviews on this site, to a post listing my Writing About the Philippines, and to the Teaching Diversity main page.  * Go HERE for more on the Filipino’s talent for Western Music.