On Not Thinking About What’s Missing

Posted on November 9, 2022 by Richard Guzman

This is a short follow up to The Neighbor Project’s 2022 gala, held this past September 17th.  The “Starry Night”-themed evening gave us some wonderful food, a beautiful evening, and an encore performance from Gerald McClendon, aka The Soul Keeper.  In terms of fundraising, it was the most successful ever, with over $180,000 raised (and still counting).  And it also placed more emphasis than ever on the “stars” in The Neighbor Project staff and board, in its supporters, and especially in the people who enter its programs and strengthen not only their own financial positions but also the financial positions of the neighborhoods they live in.

Executive director Rick Guzman gave another wonderful video presentation, which you can see in the VIDEO BELOW.  He began with the stars on the staff and one of the stars on the Board of Directors, Avis Patterson Miller, who had a street named after her for her years of dedication to her East Side Aurora neighborhood. (See the picture above left.) 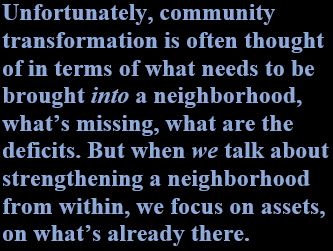 The highlight of the presentation, as always, however, is when Rick returned to a theme central to the vision of the organization: the priority placed on program participants themselves.  In “Flipping the Hero Script,” the video talk he gave at last year’s gala, he made them the heroes of the stories The Neighbor Project staff and supporters were just helping them write.  For me, the highlight of this year’s talk was when he said that, “Unfortunately, community transformation is often thought of in terms of what needs to be brought into a neighborhood, what’s missing, what are deficits.”  The Neighbor Project is different because it thinks in terms of assets, what’s already there. And what’s there are the people who already live in the neighborhood.  That’s another way of saying the line that ends The Neighbor Project’s intro video, a video I was privileged to narrate.  That line went, “We’re taking back the city’s greatest asset: the people who already live there.” *  This year the gala’s theme made them the main stars of a Starry Night, a glitzy way of re-saying something similar.  I think the 2020 gala presentation said it best.  There Guzman spoke of “Every person’s God-given ability to contribute,” and how paying attention to otherwise marginalized and vulnerable populations would make those people into the real leaders the community needed, the people who would be the real drivers of change.

*  See that intro video Here or about halfway down the landing page of The Neighbor Project’s website.  See the original announcement for the 2022 gala.

This entry was posted in Social Change and tagged Rick Guzman, The Neighbor Project. Bookmark the permalink.