This is the first of 16 short excerpts from my radio series Voices and Freedoms: A History of Jazz.  Based on my book of the same name, the series (and book) were produced at the University of Virginia in the nation’s Bicentennial Year.  The show, syndicated by the Intercollegiate Broadcasting System, ran for five years across the U.S., with Vassar being the first college to pick it up.

♦  Go here to learn more about and BUY the book Voices and Freedoms.  We plan to re-release it as a pdf download and an e-book on this site.

♦  Go to the Radio Shows page and scroll down to the list of episodes from the 16-part Voices and Freedoms radio series.  Anyone can listen to the excerpts, but full shows will be made available only to those who buy the book in either form. 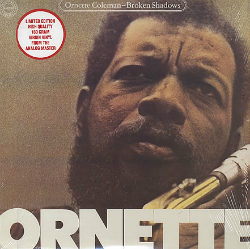 Below is an excerpt from Show #14.

The show is on ORNETTE COLEMAN, one of jazz’s great innovators.  The excerpt focuses, however, on Coleman’s great art and its ability to reach us emotionally.  Without that, innovation sometimes turns out to be no more than novelty.  From the late-50’s until today—Coleman won the Pulitzer Prize for music in 2007—Coleman has continued to challenge music orthodoxy and, most important, to create more and more beauty.  “It is Coleman’s particular genius,” said one music critic, “to create situations where beauty can happen.”  Ornette Coleman died June 11, 2015, less than three months after this posting.

The title Voices and Freedoms refers to the two themes central to my tracing of jazz history and the history that surrounded the music’s creation.  “Freedoms” follows the evolution of jazz form, from the relatively tight constraints of its beginnings into greater and greater freedom of form.  In this, Ornette Coleman may be jazz’s greatest influence on form.

As “Freedoms” follows the constant changes in forms, so “Voices” follows something that remains constant throughout these changes.  Voice.  The human voice, signifying the constant presence of the striving, surviving, overcoming human.  Jazz has always been obsessed with this voice, and Ornette Coleman’s voice remains one of jazz’s most distinctive and humanizing.

♦  Go to a list of Radio Shows.  Go to the Voices and Freedoms page.

♦  Go to the DIVERSITY TRAINING AND TEACHING main page.