Our “Green Book” fantasy, plus other Oscar winners that don’t hold up 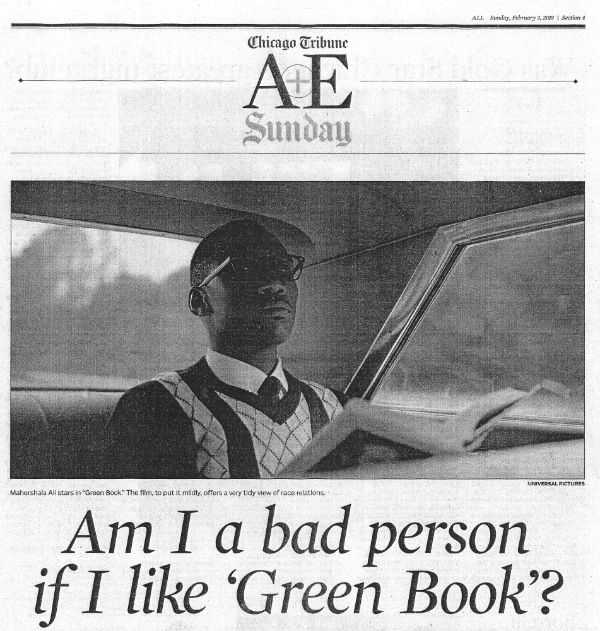 This was front page, Arts & Entertainment section, of the February 3, 2019, Chicago Tribune.  Though the Christopher Borelli article focused on other things, my direct answer to the question about Green Book—which won 2018’s Oscar for Best Picture—is this: You’re not necessarily bad, but you are typically American.

In many ways, I am, too.  In fact, I enjoyed Green Book as a piece of simple entertainment. I’ve written many, many times that Americans would rather talk about anything—anything—but race in serious, informed ways.  Sometimes I even entertain the fantasy, like the typical American, that race and racism will just magically go away if we ignore it, don’t talk about it, and just be nice to one another.  But it’s not going away in the foreseeable future.  It’s woven into, not just stamped on to, the fabric of our national culture; and Green Book was just another in a long, long list of entertainments that helps us avoid this uncomfortable fact, feeding the fantasy we hold so dear.  The caption to the picture above (probably too small to read clearly here) says, in part:  “The film, to put it mildly, offers a very tidy view of race relations.”

Now that the Oscars approach again, I was reminded of this 2019 Green Book piece by the recent William Bibbiani piece in The Wrap (January 7, 2020), “Green Book and 13 Other Oscar Winners That Don’t Hold Up.”  Here’s his list:

It would be fairly easy to show how each one of these films is racially coded in significant ways, depending on the suppression of race, or tacit enforcement of racial stereotyping, for their created worlds to work.  Directly or indirectly, each feeds the fantasy I mentioned earlier.  For now, though, it’s enough to note that three of these films directly address race and racism in comforting ways, becoming in essence comfort food for the American soul.

Driving Miss Daisy feeds us “being nice” as comfort.   As Bibbiani writes, the bigoted main character, the Miss Daisy played by Jessica Tandy, “gradually learns to be less bigoted because her chauffer, played by Morgan Freeman, is nice.”  In 1989 Spike Lee’s Do the Right Thing also comes out, but in a move that only emphasizes America’s desire not to talk about race seriously, it’s not even nominated!

Crash feeds us miraculous change as comfort.  Bibbiani calls the film “unbelievably phony and smug,” saying that, “every single story line relies so completely on forced irony,” the major one being that Officer Ryan (played by Matt Dillon) who feels up and disgraces Christine (Thandy Newton) in the beginning is the one who pulls her from a burning car at the end.  We’re led to believe there’s been changes of hearts: instead of feeling her up he saves her…and she lets him.  Racism solved.  And, as a bonus, his sexual assault of this very same woman at the beginning of the film can also be blotted out. This film beats out Capote and Brokeback Mountain, whose significance has well outlasted Crash.

Which brings us back to Green Book, which for comfort feeds us a version of “white saviorism,” a theme played over and over in film after film after film.  We’ll solve racism by actually saving, redeeming, uplifting these poor colored folk, raising them to white standards so they can finally begin to move towards equality, maybe even towards being loved. Or—in a clever, loaded twist—we’ll school them in their own culture to save them from being too white! Long before the film reached theaters, Dr. Don Shirley’s family protested the portrayal of Shirley (played by Mahershala Ali) and the overplaying of his chauffer (Viggo Mortensen) in Shirley’s life.  Talk about a white savior: the chauffer literally feeds Shirley what appears to be his first taste of fried chicken, at least KFC style fried chicken.  The Don Shirley Trio played so-called Third Wave jazz, a fusion of jazz and classical music that had its day, and some of which I liked.  But funny that near the film’s end, Don Shirley does just fine playing straight out boogie-woogie blues.  Maybe he knows something about his own culture after all.  At least the chauffer’s wife (Linda Cardellini) knows that her husband needed lots of help writing her those love letters.  In this, and a few other things, Don Shirley civilizes his chauffer a little.  But he doesn’t save him.  The chauffer does most of that, even saving Dr. Shirley from a lonely Thanksgiving dinner at the end.  Talk about stuffing yourself with comfort food.

♦  Go to a list of Reviews on this site, and to the Teaching Diversity main page.