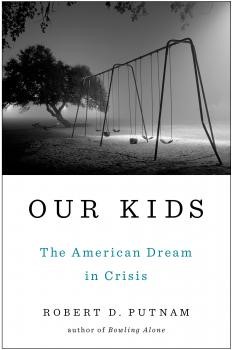 In his latest book, Our Kids: The American Dream in Crisis, Harvard political scientist Robert Putnam deepens and makes even more personal a theme he has worked on for decades: how our increasingly fragmented, isolated lives are endangering the very essence of the American dream, a dream of equality, opportunity, and civic engagement.

In Democracy in America—that remarkably prescient and fertile book about the United States—Alexis de Tocqueville remarked about the American passion for meeting to discuss issues, and linked those discussions to a sense of trust and equality pervading the social fabric.  Those observations became the basis of the term “social capital,” which began to circulate roughly 50 years after de Tocqueville, in 1840, published the second volume of his seminal work on America.  In the 60’s Jane Jacobs, the great writer on American cities, used the term to highlight the importance of “social networks”—more actual, embodied, engaged ones—long before Facebook made it our less embodied thing of the day.  But probably no one popularized the term more than Putnam did with his book Bowling Alone: The Collapse and Revival of American Community, published in 2000 and based on his 1995 essay “Bowling Alone: America’s Declining Social Capital,” where he argued that since the 1960’s our society has undergone a collapse of social and associational life, a draining of our “social capital” leading to disastrous consequences for our civic and political life.

On this site I have written much on our growing inequality and division, including our unprecedented growth in income disparity.  (See the links below.)  I have noted Bill Bishop’s book called The Big Sort, which analyses how we are segregating ourselves into increasingly like-minded neighborhoods, extraordinarily lacking in diversity of persons and ideas.  My son Rick Guzman’s provocative monograph An Argument for a Return to Plessy vs. Ferguson details immense disparities in educational resources.

Robert Putnam’s Our Kids, published in 2016, details the immense and growing disparity in opportunity.  And opportunity is perhaps at the very heart of the American dream, a thing even more basic than equality and civic engagement, the thing these actually exist to serve.  He does so by focusing on his hometown of Port Clinton, Ohio, specifically in 1959, just before America’s social capital began to collapse.

“No single town or city could possibly represent all of America, and Port Clinton in the 1950s was hardly paradise,” he writes, admitting that, “As in the rest of America at the time, minorities …suffered serious discrimination and women were frequently marginalized.”  “Few of us,” he says, “would want to return there without major reforms. But social class was not a major constraint on opportunity.”  It’s radically different today.  “When our gaze shifts to Port Clinton in the twenty-first century…the opportunities facing rich kids and poor kids today…are radically disparate. Port Clinton today is a place of stark class divisions, where (according to school officials) wealthy kids park BMW convertibles in the high school lot next to decrepit junkers that homeless classmates drive away each night to live.”

In the New York Times Book Review, Jason DeParle writes, “Robert D. Putnam is technically a Harvard social scientist, but a better description might be poet laureate of civil society.”  That civility, which Putnam has celebrated and pined over in so many essays and books is probably based fundamentally on a hunger for opportunity, for that chance to be equal so we can have time and reason for civic engagement.  Though finally somewhat hopeful, as a poet laureate of civil society is prone to be, we hope that Our Kids isn’t a chronicle of the death of this opportunity.

For More:
Watch a Chicago Tonight Interview with Putnam, where you can also read an excerpt from the book.

♦ Go to a short video on Emmanuel House featuring Stephen Caliendo, who references Putnam’s idea of “social capital.”  Learn more about Emmanuel House, co-founded by Rick Guzman.  It has helped dozens of families move out of poverty, and in 2016 was named one of the “Top 100 Most Innovative” social change organizations in the world.

♦ Go to “Not As Divided As We Seem?” for more on Bill Bishop’s book The Big Sort, among other things, and to “Graphic Inequality,” which contains stunning visual representations of America’s enormous and growing wealth disparity.