Beauty in the Time of Pandemic

Below is a 3:30-minute video of a small but momentous occasion.  My son Aaron—a wonderful musician and talented teacher and conductor—leading the Gage Middle School orchestra, Riverside, California.  He’s been teaching there for 20 years and thousands of students. When he first got to Ri.....continued>
Read more 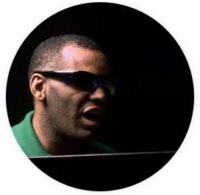 Now that I have somehow been given both a Google Nest and a Facebook Portal, I regularly say, “Hey, Google” or “Hey Portal, Play Ray Charles Radio.”  “Playing Ray Charles Radio on Pandora,” Google or Portal responds, and away we go.  It’s generally soul music of the 60’s and 70’s, though the choices.....continued>
Read more

We celebrate the Church’s “birth” on Pentecost Sunday, the day the promised Holy Spirit arrived.  This year we celebrated on May 20th, a Sunday where at my church—one of the most diverse in America—its large Filipino group took charge of the service.  The VIDEO below sh.....continued>
Read more 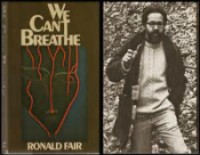 May 2020 Update:  Another “I-Can’t-Breathe” incident. I could not watch the video of the police killing of George Floyd in Minneapolis on May 26, 2020.  But I heard it while my wife described to me what she was seeing: a police man with his knee on the neck of an already-subdued bl.....continued>
Read more 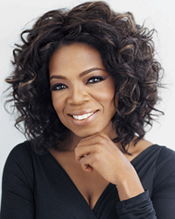 Actually, though Oprah Winfrey makes a show-stopping appearance in this story, it’s really about meeting the person Oprah calls mother: poet-actress-activist MAYA ANGELOU.  I re-posted this by request on the occasion of Maya Angelou’s death in late May, 2014. In 1989 I, as director of No.....continued>
Read more 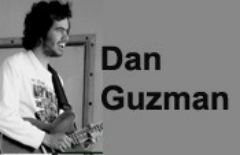 “CBS” (COOL BLACK SICKNESS) a song DAN GUZMAN co-wrote and performs with Brad Hoskins.  Fat Cats, Moses in the desert with the Great I Am, bleeding seas, and things tumbling from the sky.  Apocalyptic dread.  Cool grooves.  It not only sounds good—it&#.....continued>
Read more 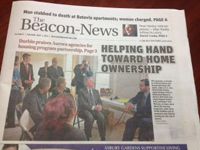 Update:  IN APRIL 2018, EMMANUEL HOUSE MERGED WITH LONG-TIME PARTNER ORGANIZATION THE JOSEPH CORPORATION TO BECOME The Neighbor Project.  THIS INCREASED THE NUMBER OF FAMILIES SERVED FROM AROUND 25 AT THE TIME OF SENATOR DURBIN’S VISIT TO NOW, IN 2020, A NUMBER APPROACHING 3000.  WATCH A VIDEO.....continued>
Read more

The Video/Audio below is an excerpt from the 8th show of my radio series Voices and Freedoms: A History of Jazz, based on my 1976 book of the same name.  The episode is about Duke Ellington. The 16-part series played across the nation for five years in the late 70’s/early 80’ and holds its relevance—or is even more so—today than it was back then.  This is perhaps especially the case with Ellington because of his dedication to his people and the Black experience in America.  The excerpts present about 6 to 8 minutes of the original 30-minute broadcasts. The link above takes you to information about the book and our plans to re-release it and provide access to the full-length original shows. Go HERE for a complete list of shows and links to all excerpts.

Elegance radiated from Edward Kennedy Ellington from an early age, so though he had many nicknames—Cutie, Wucker, Dumpy—the one that stuck, naturally, was Duke.  Ellington, Elegance, Eloquence: in meaning and sound these words are virtually synonymous. He was also more concerned with voices than anyone in jazz history: the voices of individual instrumentalists, and the voices of his people.

He wrote over 2000 compositions, and his concern for instrumental voices led him to virtually double jazz’s tone palate and open up new ways to think about arranging and voicing jazz compositions.  As much as anyone, he brought jazz into the American mainstream, yet his devotion to his people and Black culture stands as one of the fiercest, proudest signals meaning as much, if not more, today than ever. As one critic put it, “…at times he and his orchestra developed and maintained almost singlehandedly a Black cultural tradition.”

The excerpt below highlights first his concern with those instrumental voices, then jumps to near the end of the full-length, original show to highlight Ellington himself speaking 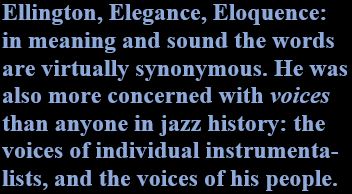 about the importance of his people in American history.  What’s left out are long sections of several important works which illustrate his growth as a composer and arranger.  I spend some time, for example, with the piece “Concerto for Cootie,” which is the basis for one of his jazz/pop hits “Do Nothing Till You Hear from Me.”  That range from concerto to pop song symbolizes the range of his music.  Well in advance of the Swing Era, he and Irvin Mills wrote “It Don’t Mean a Thing If It Ain’t Got That Swing.”  At the other end of the spectrum were those concertos, suites, and even sacred concerts which have played in churches and cathedrals all over the world. 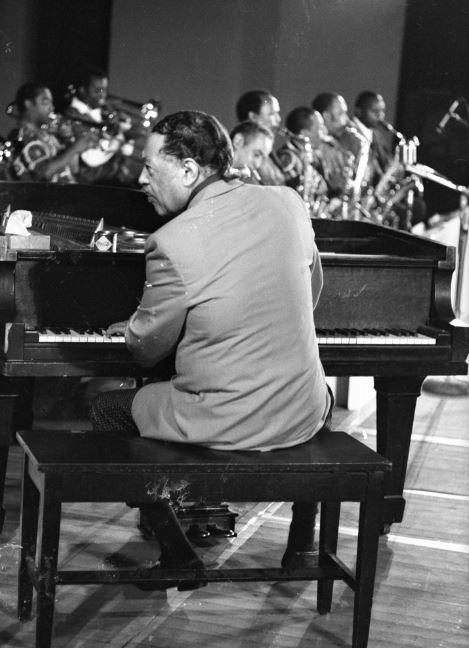 The excerpt below ends with his suite My People: first his spoken introduction to Blacks in American history, then a meditative section, sung by Mahalia Jackson, which centers us on love and God. Near the end of his autobiography he conducts a mock interview with himself.  To the question, “Besides God what sustains you?” he answers “Not besides. How does one manage without God.”  It’s difficult not to engage in sainthood-like language.  Of course, he wasn’t one, but love for music, for his people, for God—these were the fonts of his prodigious musical output and influence.  Towards the end of his life as the honors piled up—including an honorary doctorate from Yale—Ellington said, “Fate has been kind to me. She doesn’t want me to be famous too young.”  In 1999 he was given a posthumous Pulitzer Special Prize for music.

♦ Go to the Diversity Training and Teaching page of this site.

Fats Waller: One Never Knows, Do One?

The Video/Audio below is an excerpt from the seventh show of my radio series Voices and Freedoms: A History of Jazz, based on my 1976 book of the same name.  The 16-part series played across the nation for five years in the late 70’s/early 80’ and holds its relevance—or is even more so—today than it was back then.  Show #7, on Fats Waller, is probably my favorite show, and Waller would play a big part in the careers of the subjects of the next two shows, Duke Ellington and Count Basie. The excerpts present about 6 to 8 minutes of the original 30-minute broadcasts. The link above takes you to information about the book and our plans to re-release it and provide access to the full-length original shows. Go HERE for a complete list of shows and links to all excerpts. 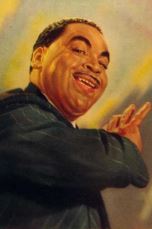 Show #7 on Thomas “Fats” Waller is probably my favorite show in my Voices and Freedoms radio series.  It contained, for one thing, our most dramatic transition: we echoed Fats shouting “Yeah, Yeah, Yeah!!!” at the end of a raucous tune, then a beat of silence before his introspective playing of one of his most beautiful compositions, “Honey Suckle Rose.”  That transition was a metaphor for his life: fast, raucous, funny but also reflective and achingly beautiful.  He was one of the music’s greatest comic geniuses, and this side of him overshadowed—partly  because he encouraged it—his beautiful sense of form and melody and human longing.  I quote Martin Williams, the great jazz critic, saying that “only a complex person could hold life at arm’s length through such great comedy, but a musically gifted man like Waller could have done much more.”  At show’s end I say Fats Waller could have been the most important jazz composer and arranger since Jelly Roll Morton, but that honor would go to Duke Ellington, the subject of show #8.

This show on Fats also featured a special guest, pianist Joe Zawinul.  Born in Vienna, Austria, Zawinul came to prominence playing keyboards with one of Julian “Canonball” Adderley’s greatest groups, and writing one of the group’s—and jazz’s—most popular tunes, “Mercy, Mercy, Mercy.” He went on to play with Miles Davis, and to be one of the 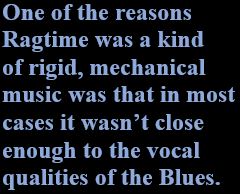 founders of Fusion Jazz, both with Miles and his and Wayne Shorter’s group Weather Report. He was voted best electric keyboardist nearly 30 times in the famous Downbeat magazine poll. One of the places I caught him was at a piano workshop long ago in Berkeley, California. He was doing impressions of great jazz pianists—Art Tatum, Bud Powell, and others—but when it came to Fats Waller he said he couldn’t.  “I don’t think I can do Fats. That’s pretty hard. He was something else,” Zawinul said. “With Fats I get the feeling of so much entertainment. That’s when art is at its highest: when it’s also entertainment.”

Many times, though, art and entertainment didn’t blend as well as it did in Zawinul’s mind. There was a tension between the two that could tear at a performer’s sense of self. This show was another exploration of that tearing tension that manifested powerfully in Fats Waller’s case and would come to a head with the Be-Bop Generation.  That’s one reason I dedicated a whole show to Fats, besides the fact that I just flat out enjoyed both sides of him, the comic and the artist.

But Fats was important to the evolution of jazz for technical and musical reasons as well.  He was the epitome of the Stride Piano school, a school founded by James P. Johnson, his early mentor. Ragtime piano was extraordinarily popular, and very influential in the 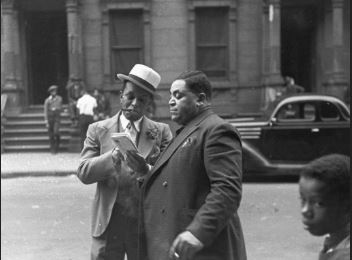 development of early jazz, but Ragtime was often rigid and mechanical, partly because it often stood at a far remove from the vocal qualities of the blues. Here again, I got to talk about the importance of voice to jazz.  In the 1920’s the vocal qualities of blues and Southern culture began influencing jazz more and more.  These shaped stride piano as well.  Ragtime’s rigidity broke down under the influence of voice.  The piano’s left hand became more propulsive, forward moving, while the right hand took on a more vocal linearity and subtlety.  The Stride Piano School brought up much of the elite in jazz piano: Count Basie, Duke Ellington, Art Tatum, all up and through Thelonius Monk.  It’s also no accident that, as in the case of his close friend Louis Armstrong, Fats was also a great singer, and even more than Armstrong his vocal style was extraordinarily fluid, full of sudden shifts and breaks that still set standards for comic timing today.  What an act he had.  Yet he couldn’t control the shifts and breaks in his life as well as he could in his music. By his mid-30’s he was breaking down. His signature line—“One never knows, do one?”—applied to him ever more ironically. He never saw 40.

♦ Go to the Diversity Training and Teaching page of this site.

Posted on September 6, 2022 by Richard Guzman

SEPTEMBER 17, 2022:  A fun and inspirational evening celebrating the STARS who make our communities shine…

> UPDATE 2: Read a brief follow up of the gala HERE.

> UPDATE 1:  Sorry. As of Sept. 12th the gala is SOLD OUT!
You can still participate, however, by going to The Neighbor Project website and making a  donation or by clicking on the banner below and going straight to bidding on items in our Silent Auction.  Thanks to all!

Last year’s gala was so much fun The Neighbor Project is doing a reprise, not quite the same…but almost.  (Go Here for a highlight video of 2021’s gala.)

Come to the 2022 Gala and get to know The Neighbor Project—its staff, supporters, and programs—better.

* Read The Neighbor Project’s “History of U.S. Housing Policy and the Racial Wealth Gap,” also accessible on TNP’s website by clicking on the About tab.