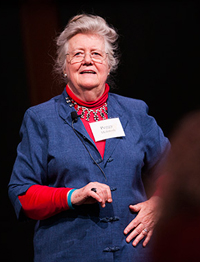 NOTE: You can find Dr. McIntosh’s essay “White Privilege: Unpacking the Invisible Knapsack” at many places on the web, but according to the Wellesley Centers for Women’s website, on the page featuring Dr. McIntosh (see a brief bio below), these versions are all pirated and unofficial.  GO HERE for an updated official copy, and at the very end of this pdf, please note the proviso that you may not print more than 35 copies, nor post the pdf itself, without prior permission.

In 1989 Dr. Peggy McIntosh, a white woman, wrote the influential essay “White Privilege: Unpacking the Invisible Knapsack,” perhaps the most succinct analysis of white privilege yet written.  “I was taught,” she writes, “to see racism only in individual acts of meanness, not in invisible systems conferring dominance on my group.”   As associate director of the Wellesley Centers for Women, she began thinking of privilege as a male/female matter and was struck by “men’s unwillingness to grant that they are overprivileged, even though they may grant that women are disadvantaged.”

“These denials,” she continues in her famous essay, “protect male privilege from being fully acknowledged, lessened, or ended,” and blind us to the “advantages that men gain from women’s disadvantages.”

It was only a short step to connect the issue to race.  “I think whites are carefully taught not to recognize white privilege,” she wrote, “as males are taught not to recognize male privilege…I have come to see white privilege as an invisible package of unearned assets that I can count on cashing in each day, but about which I was ‘meant’ to remain oblivious. White privilege is like an invisible, weightless knapsack of special provisions, maps, passports, codebooks, visas, clothes, tools , and blank checks.”

Perhaps most famously she lists over 50 “items” in the Invisible Knapsack.  Here are a few of my “favorites.”

6. When I am told about our national heritage or about “civilization,” I am shown that people of my color made it what it is.
8. If I want to, I can be pretty sure of finding a publisher for this piece on white privilege.
12. I can swear, or dress in second hand clothes, or not answer letters, without having people attribute these choices to the bad morals, the poverty or the  illiteracy of my race.
14. I can do well in a challenging situation without being called a credit to my race.
19. If a traffic cop pulls me over or if the IRS audits my tax return, I can be sure I haven’t been singled out because of my race.
23. I can choose public accommodation without fearing that people of my race cannot get in or will be mistreated in the places I have chose.
26. I can chose blemish cover or bandages in “flesh” color and have them more or less match my skin.

#6 and #26 seem to define the macro-micro ends of a spectrum, though on an everyday level, I’m not sure that #26 isn’t as big—the point being that people of color have to think about things like this that whites rarely do.*  In her book Racing Across the Lines (read my review Here and note her response), Deborah Plummer asks whites to go around for a full day thinking of themselves as white.  When I ask whites to do this, the response is almost always, “I don’t think of myself as white!” or “When I see people, I don’t see colors.”  Exactly.  That’s a privilege.  And that’s why  intentionally thinking about your whiteness is usually an eye-opening experience.

In 1998 I led a committee to bring a Diversity Plan to one of Illinois’ largest, most prestigious school districts, Naperville’s District 203 (see HERE and scroll to item 3 for details and a link to the Plan’s brochure).   I was always accused of dividing people because so many believed that “America is a color blind society.”   I often asked if people thought America was a gender blind society, if it made absolutely no difference if you were male or female.  Most people could see that this mattered, but it was more difficult—sometimes impossible—to see that color did, even though the advantages of being white and the corresponding disadvantages of being of color are absolutely monumental in virtually every area of life.  American’s would rather talk about anything but race—anything.   But at one townhall meeting a white man suddenly and wistfully said, “You know, Saturday morning I was driving an old beater car through Naperville.  I was unshaven and shabbily dressed, and suddenly realized if I had been Black or Hispanic my odds of being pulled over would have skyrocketed.  I never before thought just driving around like that was a privilege.”

Which brings me back to #8 above.  It’s about publishing.  The only thing better would have been to have a conservative white man write something like Dr. McIntosh did, and some have (more on this later), though the depth and force of “White Privilege: Unpacking the Invisible Knapsack” may always be the standard against which all will be judged.

*Note:  Johnson & Johnson did launch bandaids in “diverse skin tones” in 2005, though they discontinued the line in 2008 due to “lack of interest.”  Perhaps people of color thought they had more to worry about than bandaids!  But in 2020 J&J re-launched the brand, saying on Instagram, “We hear you,” and donating $100,000 to Black Lives Matter.

♦  Go Here for Dr. McIntosh’s page on the Wellesley Centers for Women website, where you’ll also find links to other interesting spinoffs, including her talk at Harvard on how to use privilege constructively.