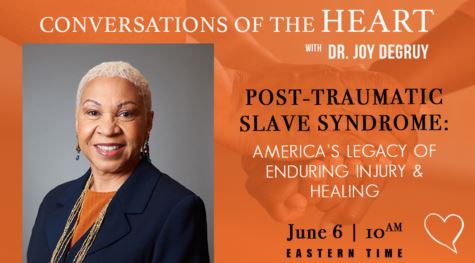 The five-minute VIDEO below shows Dr. Joy DeGruy explaining some of the central concepts of her idea of Post Traumatic Slave Syndrome (PTSS), a syndrome she locates as a species of Post Traumatic Stress Disorder (PTSD).  You cannot heal from trauma until you recognize it, name it, and own that it’s happened to you.  This Black Americans, on the whole, have not been able to do until recently.  Consequently, many have passed down the trauma—the wounding—of slavery from generation to generation, not only through wounded behaviors, but, as we know from the science of epigenetics, through the very makeup of their DNA.  In her 2001 doctoral thesis, Joy DeGruy wrote of “sustained traumatic injury as a direct result of slavery” and the continuation of those traumatic injuries “caused by the larger society’s policies of inequality, racism, and oppression.”

When asked how she came up the idea of Post Traumatic Slave Syndrome, DeGruy replied, “It just started by living in this skin.” As a young woman, long before she had four degrees—three of them advanced—she was struck by the antagonism among Black people.  In particular, she noticed that to make an insult more potent Black people would begin by saying, “You Black…so and so.”  Even for Black people—especially for them—“Black” was not a word of pride but of utter insult.  She wondered why, and also noted that denigrating each other was a common way of life that went deeper than just joking around.  In fact, PTSS results in poor self-esteem, persistent feelings of anger, and the internalization of racist beliefs.  Here, briefly sketched, is my favorite example she gives of how this works in everyday life. 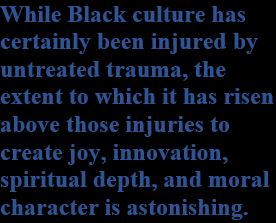 A white mother and son and a black mother and son are talking, and the black mother congratulates the white mother on her son’s achievements. The white mother beams and compliments her son profusely, then realizes that the black mother’s son has outachieved her son. She notes this enthusiastically, but the black mother, instead of complimenting her son with equal enthusiasm, says, “Well, he’s got this and that problem and doesn’t do this or that very well.” Where does this come from? “Why,” asks DeGruy, “can’t she simply say, ‘Thank you,’ and allow both herself and her son to enjoy the affirmation? Why the denigration? It’s a legacy passed down from slavery.  If an enslaving “master” complimented an enslaved mother on her son, what would that enslaved mother say to, hopefully, keep her son from being taken from her, even being sold away because he was such an outstanding commodity for the enslaver?

Your spouses and children are sold away, your mothers and sisters raped, your husbands and sons also tortured—you see all this, suffer the deepest traumas, but aren’t given any help to heal, maybe are even forbidden to speak of it.  “Then people say it’s our culture,” says DeGruy.  “Far be it for us to pathologize Black culture.  I think we’re a miracle.  We’ve endured and accomplished all we’ve accomplished with no help, not even the ability to have these conversations.” The distinction between pathologizing “their culture” and recognizing the results of trauma are crucial.  While Black culture has certainly been injured by untreated trauma, the extent to which it has risen above those injuries to create joy, innovation, spiritual depth, and moral character is astonishing. Black culture largely defines many of the positive aspects of American culture, especially to the world outside the U.S.  In the introduction to my book Black Writing from Chicago, I wrote, “Black culture has contributed in incredible disproportion to what makes the United States so distinctive culturally, politically, and spiritually.  It has made the United States what it is to such an extent that every American could be said to be one-third Black at the very least.” I’m speaking culturally, and the “one-third” is more provocative than precise, but the statement isn’t mere hyperbole.  And, without excusing any behaviors, it would bring the U.S. closer to living up to its own highest ideals of freedom and equality if we moved from pathologizing Black culture to recognizing and owning the injuries caused by the traumas of racism—both in the terrible past and terrible present.

♦ This post is part of a series of articles related to ideas used in the Becoming the Beloved Community workshop. The series’ LEAD POST contains a complete list of articles.  The full video excerpted below is on YouTube.  Outside of her own fairly recently established YouTube channel, Dr. DeGruy says she herself has never posted any of the many versions of and interviews about Post-Traumatic Slave Syndrome you can find on YouTube.  You may also be interested in visiting Dr. DeGruy’s website.