The VIDEO below shows a few minutes of Kevin Andrew Prchal and his band, The Wheeling Birds, playing this year’s Two Brothers Summer Fest, River Edge Park, Aurora, Illinois.  Kevin’s alternative and country sound translated so well to the big stage as he opened for The Lone Bellow and Lord Huron.  Follow the links below to Kevin’s website and his music videos. 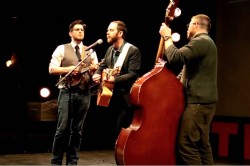 Prchal not plugged in!

This was the 8th and biggest year for the Two Brothers Summer Fest, an event with the tagline “Charity. Music. Beer.”—also, “The Best Beer. The Best Bands. The Best Cause.”—and the two charities benefiting from this year’s proceeds were Illinois Make-a-Wish and our family’s foundation, Emmanuel House.  A supporter of Emmanuel House, Kevin dedicated his “Make Me A Believer” to Rick Guzman, board chair and co-founder, with wife Desiree, of the organization.  Rick is also running for mayor!  More Here and at Guzman for Aurora.

This year Emmanuel House was named one of the “Top 100 social change organizations” in the world.  “Make Me A Believer,” indeed, and Kevin Andrew Prchal and his wonderful music have been big parts of all of this from the very beginning.

♦  Hear a full, acoustic version of “Make Me A Believer”

♦  Go to a review of Sorrow Sings, Kevin’s second CD, where you’ll also find links to his website and videos.  And now, enjoy Prchal plugged in…