I believe Psalm 103 makes this crucial connection: our souls Praise the Lord because He knows we are like flowers. God has compassion on us because we will not last—we blow in the wind and are gone—and this transience is, paradoxically, profoundly bitter but also the root of compassion in us as well.  My favorite poet, Wallace Stevens, said,  “Death is the mother of beauty. Only the perishable can be beautiful, which is why we are unmoved by artificial flowers.”

The VIDEO below is a setting of Psalm 103.  I wrote the music and adapted the text years ago, but I put the setting and the images together in a video for the December 8, 2015, memorial service of our closest friend, Deanna Petersohn, who died the day after Thanksgiving.  Only 60, she died less than three months after finding out she had cancer. 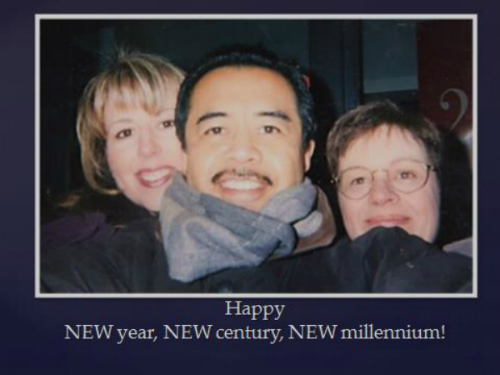 This was Linda, me, and Deanna on News Year’s Eve 2000.  We could not have wished for a funnier, more loyal, devoted friend. Though I comment on one of her shortcomings here, this does not diminish the love we had for one another. She died, however, harboring hard feelings for a few people who had betrayed her.  These were deep, astonishing betrayals, so you couldn’t exactly blame her or think you would have done better yourself. Her parents showed what love they could, we suspect, but it was scant.  Her father beat her with electrical cords and traumatized her in even deeper ways; so fighting to stay alive was deeply engrained, and when she was angry she came out swinging and could never stop swinging at a few people.  Her inability to let these hard feelings go made her death a hard one.  Not that she didn’t try throughout her life: she did, mightily, and succeeded to a remarkable degree.  The traumas of her life and the anger that flowed from them did not totally keep her from loving deeply. Many, many people lavished her with friendship and devotion, which she never felt she deserved but got anyway, freely given.  We learned from her how difficult, but also how necessary, letting go of hurts is.  In the last few hours of her life Linda said to her, “It’s ok to go, Deanna. On the other side of this is another chance for you.”

We hope, as Psalm 103 says, that our sins and their repercussions will one day be removed as far as the east is from the west.  God’s compassion extends beyond our transience to cover our deepest shortcomings as well, especially for those who tried to act out of love.  Deanna did that as best she could, and considering what she had to overcome, she did well.  I cannot help but imagine God not only finally cleansing her of all her regrets, but doing so saying, “Well done, well done.”

Deanna loved eagles, partly from a deep sense of how she was able to do some soaring despite it all—but also, we believe, out of a deep longing to soar higher than she did.  The video below, therefore, uses some eagle imagery.  After watching, please read more about our friend.  In “What the Widow’s Mite Adds Up To” we celebrate her good works and faithfulness, part of which extended to our family foundation Emmanuel House.  In “Globe Trotting with Deanna” we recall a small portion of the fun we had.  Long ago Linda and I were married in London on October 20th.  On October 23rd we picked Deanna up at Heathrow Airport.  She was the one person we newly weds most wanted to continue exploring England and France with.