Posted on September 8, 2013 by Richard Guzman 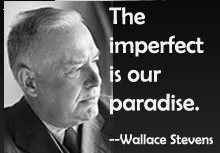 This is Part 2 of an essay I gave as a talk at a philosophy & religion conference in Kolkata, India, August 2002.  I sought to apply new ideas about Indian novelist Raja Rao to multicultural and political issues then brewing in India. Read Part 1 of essay.

The small Orient Paperback edition of The Serpent and the Rope I own is over 400 pages long.  In 1967 Rao published The Cat and Shakespeare, his third novel.  Just over 100 pages, this novel could be said to center on Realization or “perception,” the third of the three stages of “giving up the world.”  The main character, Ramakrishna Pai, wants to build a three-story house.  The guru is his friend Govindan Nair, who tells Pai, “…God will build you a house of three-stories.  It is already there.  You’ve just to look and see, look deep and see.  Let the mother cat hold you by the neck.”  In an untypical moment of despair, Govindan Nair says, “We have no feline instinct.  We live like rats,” meaning we live as if we were objects.  But unlike the torturous musings that dominate The Serpent and the Rope, The Cat and Shakespeare exudes a gentle, ironic, comic air.  Near the end of the book Ramakrishna Pai says, “Life is so precious, I ask you why does not one play?”  This is the universe as lila, the play of the Absolute, and the goal is to learn to play like kittens and to see the world from the vantage point of being carried by the mother cat who dangles us from the scruff of the neck.

When I read these three remarkable novels twenty years ago I saw the road towards such playful freedom as increasing purity, and in a way this is still true, except that it matters tremendously what one seeks to be purified from.  Looking at these novels now, I see the road towards purification not only as more complex, but also called into question.  In Kanthapura, for example, there is strong persistence of a critique of purity, especially from those villagers who accuse Moorthy of adopting a “guilded purity.”  The Indian revolution required the crossing of caste lines.  The first time Moorthy enters a Pariah house the room seems to shake, and the gods and ancestors seem to cry out.  After he does, he feels faint and washes with Ganges water.  The book’s narrator says, “Afterall a Brahmin is a Brahmin, sister!”  Near the end of The Serpent and the Rope, Rama goes to visit Madeleine one last time.  She has become obsessed with purity in her pursuit of her vision of what India is, and this dialogue occurs: “Why did you come?” she asks.  “To see you,” says Rama.  “You cannot see anything but the eighteen aggregates,” she replies, and goes back to counting her beads.  As he leaves, Rama says to himself, “…she parodied herself out of existence.”  The novel courses towards an ending of lightness, almost as if Madeleine’s obsession has eased Rama out of his own.  “Do you know what a Brahmin is,” he asks his friends Catherine and Georges.  “A Brahmin is he who knows Brahman.  That is one definition,” he answers.  “There is another, a roguish definition.  A Brahmin is he who loves a good banquet.”  The novel ends with them rejecting a trip to Benares in favor of Travancore, and sipping chocolate in plush chairs, almost as if realizing that not only is taking the road of purity difficult, but perhaps misguided in the first place.

The Cat and Shakespeare justifies this re-interpretation of the direction of the novels.  Its tone, though moving and deeply felt, is essentially comic, the narrative peppered with irreverent logic questioning the ability to see cause and effect clearly.  It resolves many tensions inherent in pursuing purity, of which two are key to my argument.  First, the main character Ramakrishna Pai makes pursuing anything pure problematic by making reality a matter of perception.  “Freedom is only that you see that you see what you see,” he says.   Second, one of the major symbols of the book is a wall that Ramakrishna Pai must learn to cross.  Ultimately, the wall is only ahankara, the limitations of the ego, which keep him from seeing that he sees that he sees what he sees.  At the end of the novel when he learns to cross the wall one way he expresses his enlightenment is to say, “I saw…eyes seeing eyes seeing.”   For Raja Rao reason and mysticism have complementary roles.  Reason analyzes the folly of duality, and in doing so often turns upon itself, parodying itself—thus the prominence of irreverent logic.  Even in The Serpent and the Rope, whose mood is so often tortured and somber, every serious chain of logic seems now, upon closer examination, to be matched with an irreverent one, especially in the novel’s latter stages.  The job of mysticism is to keep the wall of ahankara low.  That is, given the persistence of ego in everyday life, mysticism, based on the realization of radical oneness, is the process of keeping boundaries crossable.  In The Cat and Shakespeare the guru, Govindan Nair, jumps easily back and forth over the wall.

Purity depends on boundaries, and of course one of the root means of the sacred or sacramental is being set aside—inside a border separating pure from impure, sacred from profane.  This may be good in theory or from the point of view of ideology, but human identity, socio-economic structures, and all practices are in reality mixed affairs.  That is why a Brahmin is both one who knows Brahma and also loves a good banquet.  In the spirit of acknowledging the inextricably mixed nature of reality I use the word “impure.”

An impure philosophy sees boundaries as constructs of convenience that should remain fluid and permeable and mediate, not stop, the flow between inside and outside.  Purity is not banished, but can now be seen to guard the permeability of boundaries, not their inviolability.  Purity protects boundaries from the things that would harden them.

Much of my view, and the reason I began re-reading Raja Rao, was my growing involvement in multiculturalism and diversity issues in the United States, both in the classroom and in the arena of public policy.  As the black writer James Alan McPherson put it: “Identity in America is almost always a matter of improvisation, of process.”  It’s so mixed that, “at any moment black could be in reality white, and white could in reality be black.”  I tell my students that as American we may be two-thirds whatever we are, but all of us are at least one-third black.

We think of the United States as the most mixed, most multicultural society ever, and perhaps that’s true. But in his essay “The Predicament of Identity,” which he gave as the second Dorab Tata Memorial Lecture in Delhi last year, Amartya Sen argues essentially for a view of India as radically multicultural, even to the extent of not holding Hinduism at the center of Indian identity.  He quotes Tagore, who, in a letter to C.F. Andrews dated March 13, 1928, says: “…the ‘idea of India’ itself militates ‘against the intense consciousness of the separateness of one’s own people from others.’” It seems obvious that purity depends on dualism, on an impure other, and that non-dualism can be seen as a tacit acknowledgement, if not outright encouragement, of  inextricable, inevitable mixtures.  What Raja Rao ultimately meant by “giving up the world” was to give up duality, to realize the transient quality of boundaries and borders, the inevitable mixing of comic and tragic, Brahma and banquets.

Rao’s work resonates with many Western philosophical movements, including Deconstruction, not only in the questioning of boundaries, but in his idea of play.  In “Structure, Sign, and Play in the Human Sciences,” Jacques Derrida distinquishes between safe play and radical, free play.  The former depending on the duality of center and margin.  But non-dualism is uncentered, as in radical play, and nowhere more brilliantly expressed in fiction than in the playful nature of Raja Rao’s The Cat and Shakespeare.  As I have mentioned, Ramakrishna Pai says, “Life is so precious, I ask why does not one play?”  And Rama in The Serpent and the Rope implicitly links the vision of the universe as lila to the courage “to dare annihilation” which animated those strugglers for Indian freedom.  That was indeed fearless, radical “play.”

Rao’s work also corresponds to many ideas in the so-called “Impure philosophy” movement, which received articulation in the West in the April 1998 issue of Angelaki: Journal of Theoretical Humanities.  The key question of the issue is, “Is it distinctively, even authentically, human to be, in some sense, impure?”  Here thinkers such as Mozaffar Qizilbash, Stephen Mulhall, Maria Dimova, and Arvind Sivaramakrishnan offer readings of Western philosophers from Plato to Derrida which emphasize the persistence of impurity as a condition of humanity, and how we think about being human and transcending the human.  For example, in his reading of Sartre’s Being and Nothingness, Robert Switzer characterizes metaphysics as a voyeuristic activity: the desire to see and thus objectify without being seen or touched.  Yet, as Switzer says, “Seeing is inescapably susceptible to being seen.”  This has powerful resonances with Rao’s sense that enlightenment is “eyes seeing eyes seeing.”  The desire to be the unseen, objective see-er is one of the most powerful reasons for the persistence of purity.  The acceptance that seeing also involves being seen makes the boundary between see-er and seen profoundly permeable, and the whole process one of dual implication and mutuality which precludes the positing of a pure purity.  “Freedom is only that you see that you see what you see.”  Perhaps this is one way to begin moving towards freedom and away from the violences of purity.

Even in the first passage I read from Rao, his discourse on style in the 1937 preface to Kanthapura, there is a mystical, but common sense acknowledgement that India and the whole world are inextricably mixed.  “We cannot write like the English.  We should not.  We cannot write only as Indians.  We have grown to look at the world as part of us.”  The world is the self seen as the other.  To realize this is to give up duality.  This vision, as Tagore said, militates “against the intense consciousness of the separateness of one’s own people from others.”  The phrase “eyes seeing eyes seeing” could still be taken as eyes seeing other eyes across  hardened, military borders, such as we have in many parts of the world today.  Non-duality and its socio-political consequences are perhaps too complex to work out in this short presentation.  So I leave with that second image from The Cat and Shakespeare, the image of Govindan Nair, the guru, jumping easily back and forth over the wall of ahankara.  If for now the walls cannot be totally down, at least we hope they can be lowered.  This is a mystical hope.  Given the reality of our being inextricable mixed in all we are and do, however, we can also hope that one day we will see low, easily negotiable walls, as only reasonable.

—Go to my original essay on Raja Rao, “The Saint and the Sage,” which includes a list of more resources on Rao.—