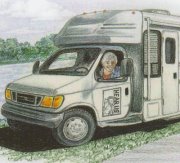 A couple of years ago NPR’s The Story did this documentary on Diane Nilan, the distinguished advocate for homeless people, and founder of Hear Us, her national organization giving voice and visibility to homeless children and youth. Called “Homeless on the Road,” the documentary gives you insights not only on the big issues which, in 2005, caused Nilan to sell her home and so many of her possessions to hit the road on behalf of homeless people, but also on smaller day-to-day issues.  She travels in an RV christened “Tillie,” dealing with clogged fuel filters, water gushing from a broken kitchen faucet, and around, oh, 80 square feet of living space!  Hear the documentary below.

Interviewed by David Brown, substituting for regular host Dick Gordon, Diane reveals her attitude towards dangers on the road and what keeps her going despite these.  Stories do.  Stories of survival, of hope, of persevering against great odds.  You can read some of these in Diane’s book Crossing the Line: Taking Steps to End Homelessness (read my review of it), and hear a couple in this radio piece.  And you can see and hear many more stories in Diane’s films.

Diane Nilan, founder of Hear Us

With no film-making experience, she nonetheless hit the road with a video camera, hoping to document the lives of homeless people across the country.  With editor/director Laura Vasquez, Diane has now made two major films: My Own Four Walls, focused on homeless children and youth, and on the edge: Family Homelessness in America, which tells the story of seven courageous women and their children.  on the edge won awards as a documentary film and was shown on PBS stations across America on Mother’s Day 2012.

♦ Go to the Hear Us main page for more material about Diane and Hear Us on this site.

♦ Visit www.hearus.us.  Make a contribution, get involved in homeless advocacy, buy Crossing the Line, My Own Four Walls, on the edge, and other stuff to help the homeless.

Get the Flash Player to see this content.
This entry was posted in Social Change and tagged Crossing the Line, Diane Nilan, Hear Us, homeless advocacy, homelessness in America, My Own Four Walls, On the Edge. Bookmark the permalink.