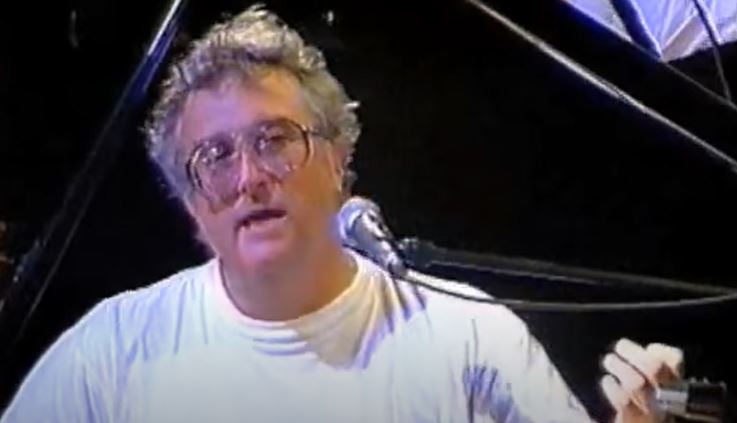 Randy Newman explains his concept behind “I Want You To Hurt Like I Do.” Berlin, 1994.

No one writes songs quite like Randy Newman, and certainly not about the subjects he writes about.  He celebrates L.A. in “I Love L.A.” by pointing out a bum on his knees. In “Shame” an old New Orleans rich guy begs his young, kept paramour for love while fighting off insistent background singers who keep repeating “Shame, shame, shame.”  In “Rednecks,” from what’s perhaps his masterwork album Good Old Boys, the chorus goes “We’re rednecks, we’re rednecks. We don’t know our ass from a hole in the ground. We’re rednecks. We’re rednecks. We are keeping the n- – – – rs down.”  In “Sail Away,” he imagines a slaver trying to convince an African to get on a slave ship: “In America you get food to eat. Don’t have to run through the jungle and scuff up your feet. You just sing about Jesus and drink wine all day. It’s great to be an American.”  And in “The World Isn’t Fair” he not only sums up Marxism beautifully and masterfully in just a few lines of pop doggerel but ends by talking to Marx himself: “They tried out your plan. It brought misery instead. You see how they worked it. Be glad you are dead. Just like I’m glad I’m living in the land of the free, where the rich just get richer, and the poor you don’t ever have to see.”  He also tosses off songs that become the stuff of weddings and goo goo eyes, like “Feels Like Home,” though there’s a strange darkness in the bridge, the darkness of a breaking window and a wailing siren.  Another song like it is “I Miss You,” which he wrote for his first wife after he’d married his second.  “I couldn’t think of a better way to piss off two women at once,” he once said of it.  He’s a master of songs which sound romantic, even hopeful, but are really the opposite, like “Marie.” There’s “Short People,” of course, and movie scores and songs—including Toy Story and “You’ve Got a Friend In Me”—some he’s won several Academy Awards for.  He’s one of my favorite performers as well.  I love his faux-New Orleans mush mouth singing style, and also the fact that he’s said his most important early influence was Ray Charles, one of the most important influences on my own life as well. 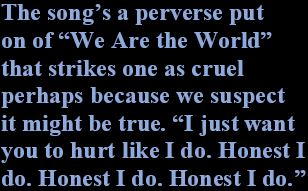 I could wander around quoting this and that for a long time, but all this wandering is just preparation for saying he’s also written “I Want You to Hurt Like I Do.”  As he explained in a 1994 concert in Berlin, he wanted to write an anthem like “We Are the World.” He’d get a bunch of “good celebrities” to sing along, too, but the sarcastic good fun in his explanation doesn’t quite prepare you for the song’s shock.

I still feel the shock of it, even though I know it’s a put on.  It’s a perverse put on of “We Are the World” that strikes one as cruel perhaps because we suspect it might be true.  It’s an eye for an eye world. Even more sad, even more pervasive, even if it seems less threatening—it’s a hurt for hurt world.  It’s a therapy cliche that “hurt people hurt people.” But surely, we think, the hurt for hurt should be aimed at the wife he’s leaving, not the child.  Actually, though, I wouldn’t put it past us to also be aiming for those little ones who just hang their heads.