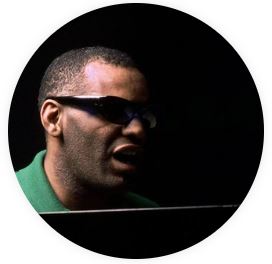 Now that I have somehow been given both a Google Nest and a Facebook Portal, I regularly say, “Hey, Google” or “Hey Portal, Play Ray Charles Radio.”  “Playing Ray Charles Radio on Pandora,” Google or Portal responds, and away we go.  It’s generally soul music of the 60’s and 70’s, though the choices are sometimes puzzling: like why Israel Kamakawiwoʻole’s ukulele-heavy version of “Somewhere Over the Rainbow” keeps showing up.  The white guy most often played is Van Morrison, which seems just right, not only given his Charles-inspired singing, but this one particular verse in his song “These Dreams of You:”

These are typically enigmatic Van Morrison lyrics, the kind Ray Charles never wrote and hardly ever sang.  Van’s lyrics almost seem to make sense, but their mystery invite you to make your own sense.  Why was Ray Charles shot down? And what question did he answer Yes to?  To me,  Ray Charles was shot down because his music seems the most old-fashioned of all the music played on this Pandora station.  The question was, You belong somewhere else, don’t you?  Paradoxically, Ray Charles is the most out of place musician on Ray Charles Radio, even more out of place than Hawaii’s Israel Kamakawiwo’ole.

Three times in a row when I spent time listening to Ray Charles Radio, I didn’t hear one Charles song.  I heard the Beatles (“Let It Be”), even John Denver (“Rocky Mountain High”), but nothing from the station’s namesake. When a Ray Charles song comes on, you’re immediately thrown back to the straight out blues, and to Gospel music, and to jazz—trio, small band, big band—which almost no one was still doing at the time.  He doesn’t do sweet soul, either, a la Sam Cooke or Smokey Robinson and all those Motown stars.  This in no way implies a criticism of them—I love those men and women of Motown and Stax, perhaps especially the Supreme’s Mary Wilson, an early idol of mine, whom we lost just a few days ago.  And who can resist Smokey’s cleverness in songs like “The Way You Do the Things You Do”:

Ray’s more likely to be singing lines like in his “Hard Times”:

My mother told me, before she passed away
Son, when I’m gone, don’t forget to pray
Cause there’ll be hard time, hard times
And who knows better than I.

His rhythms are chunkier and his voice—grittier than anyone else’s—often feels like despair, conveying a dread matched only by The Four Tops’ Levi Stubbs, once described as having a voice sounding like he was picking his way through a mine field. Still, no one on Ray Charles Radio shouts and growls like Ray, not even James Brown, who seems to shout for different reasons.  And when Charles does turn gentler, he’s almost always singing Country music.  Country!  “Together Again,” “Worried Mind,” “I Can’t Stop Loving You.”  Or his marvelous, surprising version of “Oh, What a Beautiful Morning,” from the hit Broadway show Oklahoma.  Oklahoma!

Ray Charles was in the very first class inducted into the Rock ‘n’ Roll Hall of Fame.  It’s partly for making blues and Gospel so integral to rock.  And when he moved on, so to speak, he re-made Country music by infusing more blues and Gospel into it than it ever had.  Country music is usually considered white, though its roots were considerably blacker than we think.  Look at Jimmie Rodgers, for example, another artist in that first Rock ‘n’ Roll Hall of Fame class.  When Ray Charles started doing Country music, he not only pointed to that past, he also said, Here’s what whiteness integrated into blackness sounds like.  Usually it’s color having to assimilate, to lose its darker tones to become acceptable enough to white society.  James Baldwin called this loss “The price of the ticket,” the price of being accepted.  Historically, whites made money by taking black music and dumbing it down.  That’s the meaning of the final scenes of the 2020 movie Ma Rainey’s Black Bottom, where we see a white band doing the music of the central character Levee, played by Chadwick Boseman in his final role.  (He deserves a posthumous Oscar for it.)  Levee’s been paid a pittance for his songs.  They’ve been stolen.  Ray Charles reverses that flow.  He’s so different from anyone else on Ray Charles Radio not only because he stays closer to blues and Gospel and jazz, but also because he’s assimilated white music into those roots as well.

♦  Go to All Things Ray for an index of all Ray Charles material on this site, including a 5-part video lecture: “Me and Brother Ray.”  All Things Baldwin functions similarly for James Baldwin, and in my sermon “Pentecost Means No Supremacies” I use Baldwin’s “Price of the ticket” idea.
♦  Go to a list of Reviews and to the Teaching Diversity main page.