The Video/Audio below is an excerpt from the 12th show of my radio series Voices and Freedoms: A History of Jazz, based on my 1976 book of the same name.  The 16-part series played across the nation for five years in the late 70’s/early 80’ and holds its relevance—or is even more so—today than it was back then. The excerpts present about 6 to 10 minutes of the original 30-minute broadcasts. The link above takes you to information about the book and our plans to re-release it and provide access to the full-length original shows. Go HERE for a complete list of shows and links to all excerpts. 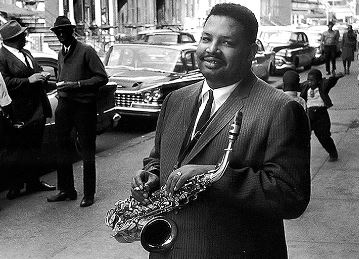 Cool Jazz’s laid back style and muted sonorities took over jazz in the early 50’s…but not for long, though its popularity does last even to this day.  The 12th show in the Voices and Freedoms radio series shows that as Cool Jazz reached its peak of popularity a counter-movement was already taking shape in the form of Hard Bop, Soul Jazz, and Funk Jazz. These brought back a more vigorous, edgy voice to jazz, much of it coming from musicians reaching back into to jazz history even past Louis Armstrong and into blues and, a surprise to some, the music and preaching of the Black church. 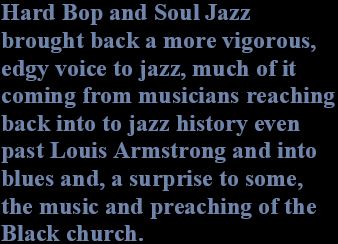 While Cool Jazz’s popularity spread quickly, especially among whites, you just have to remember some of the titanic shifts happening in the black community, shifts which couldn’t help but influence the music.  There was, for one thing, the full flown beginnings of the Civil Rights Movement, plus the beginnings of legal change, in particular the 1954 Brown vs. Board of Education decision.  The excerpt below speaks of these changes and of musicians leading another musical revolution: Sonny Rollins and Clifford Brown, Horace Silver and Art Blakey, Charles Mingus, Julian “Cannonball” Adderley.  And I spend some time talking about one of the most important figures in my life, Ray Charles, whose effect on Hard Bop and Soul Jazz has often been underestimated.  The show also features a poem composed and read by Julian Bond, whom I had the privilege of meeting several times. We were both huge Ray Charles fans.

But at the time many of the so-called Black Bourgeoisie were not. In fact, they were wary of Charles, whom many saw as a dangerous blues shouter, a throwback to an unsophisticated Black past they were wary of acknowledging.  They saw the move to Hard Bop and Soul as a regression rather than a musical revival. Amiri Baraka and many other Black writers often castigated this Bourgeoisie, this Black middleclass that had supposedly made it, for turning their backs on their own culture in favor of assimilating into whiteness and white society, including Cool Jazz and related movements (like Third Stream Jazz) which sought—in the name of a higher class, more sophisticated music—a way of escape from the blackness from which they came.  James Baldwin would call this “the price of the ticket,” the price of entrance into acceptable, white society. The cost, he said, was nothing less than the annulment of your own identity.  But the currents flowing throughout this American musical and social sea change were complex. Some proponents of Soul Jazz saw in it merely an escape into good times, and while the Black church ultimately fueled so much of the Civil Rights Movement, we must remember that all of it didn’t initially support that Movement, counseling the gradualist, go-slow approach adopted by so many white churches.

♦ Since Ray Charles figures so prominently in this Voices and Freedoms episode, check out my five-part Video Lecture Series called “Me and Brother Ray,” which focuses on his life and work.
♦ Go to the Diversity Training and Teaching main page.