Crowds at the Portobello Road Market in the Notting Hill neighborhood

In London my neighborhood is Notting Hill in the Royal Borough of Kensington and Chelsea, and the look of confusion must be lifting a little from my face because people are starting to ask me for directions.  The other day a Greek man asked for directions to Portobello Road—where they hold a famous street market every Saturday—and, though I realized a moment after he turned the corner that I was off by three blocks, I was still proud I’d got him that close and knew the difference.  Then the other day when a store owner didn’t know where the Town Hall was, I jumped in, directing two English men nattily dressed in crisp suits to Kensington Church Street to Sheffield Place and down Hornton Street, shouting to them as they walked away that the Town Hall was next to the borough’s central library.  Five seconds later people in shops ran to windows and we on the street stood still as two huge lorries came creeping down Notting Hill Gate snarling traffic.  Their horns hooted, and pasted on their windshields were signs reading “Play Fair with Petrol.”  I realized then that I’d spent so much time learning the neighborhood that I’d lost touch with the rest of the world.

I vaguely remember hearing that Ecuador’s economy was dollarizing.  Because two of my boys go to Naperville North High School, I’d heard of a gaffe George W made when he was there—something about calling a respected reporter an asshole when he didn’t know the mic was on.  Otherwise most other news had been whizzing by, even the news that England was in the grip of a strike that had blocked the delivery of petrol to all but the most essential services.  I walk or travel by underground everywhere, so the strike hadn’t effected me directly, except, now that I think of it, it’s been easier to cross the street for the last week. This morning as I write the nation craves a return to normalcy and the strike has been lifted at the major petrol refineries, though only 20% of stations will be fully supplied by Monday.  So how much has Tony Blair been damaged by this?  That’s the center of fierce political debate, conservatives gleeful, Labour in damage-control mode.  One headline reads “A Shameful Week of Applauding Mob Rule,” with this sentence in its subhead: “Do we want democracy or French politics?”  That question will incite a small riot at table #17 in Vincent House tonight. 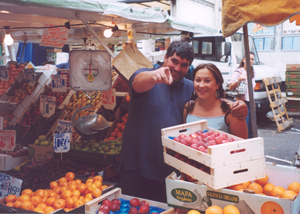 Barry at his stand on Portobello Rd. He did a cameo in the Julia Roberts Notting Hill film.

Vincent House is a residential hotel on the northwest border of London’s Zone 1, and at about 172 Pounds per week (roughly 267 U.S. dollars) it is by far central London’s bargain, especially since that price includes breakfast and supper.   I’m staying 16 weeks, but several residents have lived here for ten years or more.  As a bonus, Vincent House also seems to be a magnet for some of the city’s grand eccentrics, especially at table #17, where by chance I wound up being assigned to one specific chair for meals.

In the United States the problem of race is profound, perhaps our deepest social and psychological disease.  Yet because much of our general population hasn’t really suffered much, and we are fabulous at denial, race and other assorted problems don’t tend to spoil our generally upbeat mood.  They make fun of us here for being so innocent and untroubled, for smiling our hello’s, for waving so cheerily at tour buses, as a group of students did to the one I was in a couple of weeks ago.  “That gives ‘em away as Americans right off,” said our tour guide wistfully.  Here color might not be quite as deep a divide, though it is plenty deep enough, but in many ways the British are behind us.   They don’t talk as much about race here, though they should.  (Not talking about it is also what most Americans wish for—as in: ignore it and it will go away.  I write more about race in other places in this series, especially Part 5.)  At any rate that problem among many white Londoners is buried not so much by the mechanisms of psychic denial as by their sheer irritation at foreigners of all kinds.   Making fun of the French here, for example, is a surer way to get laughs than working blue.  It’s serious business.

A couple of nights ago at dinner, Rochfort Young, who sits across from me at table #17, said, “Me thinks I spy a froggy.”  He was looking past my left shoulder, and in a dining room with people representing Spain, Denmark, Cypress, Italy, South Africa, Australia, Japan, and France I don’t know what set him off against this particular French person, something just did.  “A froglette,” he glowered, and no matter how funny this might sound, he wasn’t being funny.  “A vile race that deserves extermination,” he continued.  For Rochfort Young there is nothing good about France, not even wine.  He rather fancies German wine, which irritates Peter Knowles, the man to my left, who hates the Germans.

Here multiculturalism seems to breed a different, more on-the-edge tension than in the States.  The U.S. is noisier than most places in the world.  I noticed more quiet even in the international terminal at O’Hare as I was in queue for my Air India flight on August 29th.  A neighborhood revival starting about a decade ago has made Notting Hill one of the places to be in London, but though people often jam the streets there’s not that jangling U.S. street feel you get in, say, Chicago.  Yet this is a place of continual, small eruptions.  Ten days ago as I sat on the marble steps of one of the great white Victorian row houses on Queens Gate Terrace peeling an orange for lunch, I watched sadly as a pretty blond woman standing in the middle of the street about ten yards away screamed into her mobile, “Yes, I know!  I know!  Shut up!  Shut up!  Please give me a rest!”  Her shoulders shook and tears streamed down her face.  The other morning a young man of slight build stood in an alleyway shouting “Think! Think! Think!” into his cell phone.  And last week I was bending down looking at a low row of vitamins in a health food store when I heard an explosion of German on the street and startling up saw a large carbuncular man shouting at no one in particular.  His hands waved stiffly, wildly.  This and the harshness of his voice and reflexively I thought of Hitler.

My calling plan requires touchtone, and Vincent House, in a move management describes as “a tangible step into the digital age,” begins installing touchtone on Monday.  Thus I’ve often walked the streets late at night finding assorted phone booths to call home from.   Three nights ago, I am calling from a booth a block away when I hear another explosion of German, this time definitely directed.  It is midnight and a young woman is half out in the street jabbing her finger, cursing, almost spitting at a young man on the sidewalk who looks up and down, hands in his pockets, his gestures both helpless and defiant.  I mention to Peter Knowles—my German-hating table mate at Table 17—that, in fact, most of the explosions I hear are in German.  An expression of quiet intensity settles into his face.  “I hadn’t noticed that, but I shall have to notice it more from now on,” he says.  Too late, I realize I have reinforced a hatred.

A week ago I laughed to myself when I heard a lecturer say that England hadn’t been invaded since 1066 because I thought the Battle of Britain was a fairly close approximation of invasion.  “We must never let the Germans forget what they’ve done,” said Andrew Russ-Turner, a large, gruff, ex-military man we call RT.  He came by table #17 this morning, as many people do during meal times, knowing how easy it is to start fireworks here.  It’s also because Peter Knowles seems to be the social center of Vincent House.  Open and gregarious, his friendliness puts people at ease, though he complains regularly about how loud the Greek Cypriot students are.  He has made me feel welcomed at Vincent House, for which I will always be thankful.  “The bastards,” Peter says quietly in response to RT’s reminder that this weekend is the 60th anniversary of the Battle of Britain.  Rochfort Young, who always comes down to breakfast as late as he can, showed up just then.  Of course, the word “bastards” reminded him reflexively of the froggies and the froggy tactics of Brynle Williams, widely regarded as the architect of the just-now easing petrol strike.

The two trucks creeping down Notting Hill Gate set off hundreds of car horns whose hooting blended together in what seemed a constant, low dirge.  I heard it a block away through my window for over an hour after I returned to Vincent House.   “We have won a moral and just victory,” said Brynle Williams Thursday the 14th when protesters in Cheshire called off their blockade.  He called for a fuel tax cut in 60 days, saying, “I hope the government is going to respond with honour and dignity.”  But Tony Blair has said he won’t budge on the tax (which is really a tax on a tax), so mid-November may see an encore of the dirge of horns, or worse.

♦  Go to Lead Post in this series.  See end for links to all series items.