Posted on September 8, 2014 by Richard Guzman 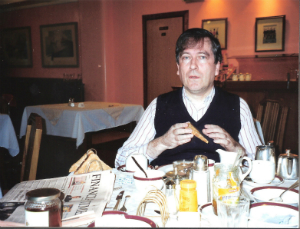 Early morning, August 17, 2014.  An email from Mr. Andrew Keen tells me of the passing of Rochfort Young.  He and Peter Knowles were my compatriots at Table 17 in the dining room of Vincent House, the Notting Hill residential hotel I stayed at in the Fall of 2000.  Pictured at left among the late-breakfast debris of our table, Rochfort—who always came down late—was initially standoffish to this stranger (me) invading the table he and Peter claimed as their special haven.  Rochfort had lived there since 1986.  That he soon let me into their circle and into his good graces stands as one my fondest memories of London…and of relationships generally.  Once past his sometimes thorny exterior, one came close to an extraordinary intelligence, even if one didn’t agree with all its particular opinions.  One also came close to a sensitive, vulnerable soul, which—I strongly sensed—that tough exterior and those strong, strong opinions had been erected to protect.  The following remembrance features Rochfort and Peter.

At Vincent House these are heady days for Rochfort Young.  A confirmed enemy of the Euro, he has taken to calling it the “Urine.”  Often he brushes past me at table #17 on his way to pick up his dinner entre, slapping the Financial Times in his left palm and announcing, “Good news!  The urine has fallen again!” as indeed it steadily has.  Rochfort expects it to sink to 80 or below which won’t wreck the European Union, but just might keep England from joining it.  Tony Blair is for joining, another reason he seems so widely despised, though his current majority in Parliament—he has at least 50 votes more than he needs for a majority, while the Conservatives have just half of what they would need—makes him untouchable for now.  A profoundly conservative Thatcherite, Rochfort is at least not as much a conspiritorialist thinker as Peter Knowles. 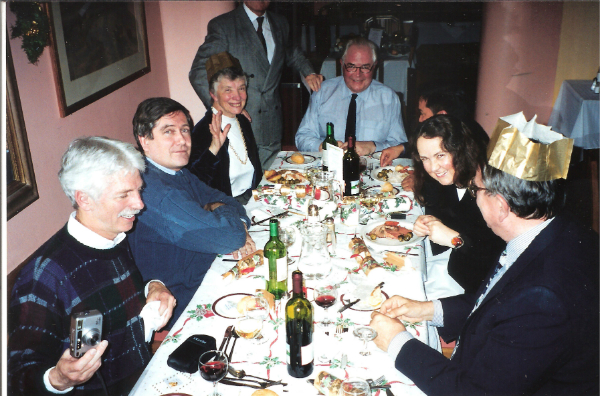 I invited Peter and Rochfort to attend a lecture on European business, making them promise not to interrupt, but asking them to respond afterwards.  Our lecturer was oddly brilliant.  He said that it made all the sense in the world for Europe to unite and adopt a single currency and for England to go along too.  Yet in the end during a straw poll he voted against the EU and the euro, saying, in essence, that culture weighed more heavily than sense, and there was just too much cultural separatism for a United States of Europe ever to come into being.  Rochfort, not wanting to miss the hot meal at Vincent House, didn’t show, but Peter did and was delighted.  Nearly two-thirds of our students stayed for Peter’s response which began: “I’m against the EU because you have to trust people you do business with and how can you trust the *@!&#$* French and Germans.”  About the fifth time he called them backstabbers, sonofabitches, and ruthless lying bastards, I jumped up claiming no responsibility for him or anything he said.  The students loved it. 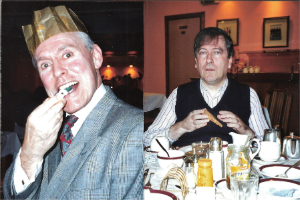 The very next day when I came down to breakfast Peter said, “Richard, get your food and sit down.  I have something that will interest you.”  There on the front page of the Financial Times just below the fold was this story:  “Chirac repeats his call for France and Germany to lead two-tier EU.”  And on page 9, this: “Prodi fights back over EU reform call.”  France and Germany propose that those countries ready to join the EU and adopt the euro do so now under their leadership while those not ready simply join when and if they want.  But European Commission president Romano Prodi chides them, saying that “Too much direct co-operation between governments at the expense of an approach involving the Commission and parliament would undermine the democratic nature of the whole EU structure and would be a seriously retrograde step.”  For Peter it’s the same old story of the French and Germans grabbing power, and he believes, further, that Germany is only leading the French on until such time as it can flatten them economically and occupy the top of a European hierarchy alone.  He made me promise to copy the two articles and hand them out to our students, saying, “While I may be a lunatic, I’m not totally crazy.”

Even a bigger conspiratorialist is Torquil Dirk-Erickson.  An Englishman who has lived in Rome for 30 years, Torquil spends about a month a year at Vincent House.  His business is getting his Italian clients to good English language schools in London, and he visits to check on quality and get new leads.  He is one of Vincent House’s grandest eccentrics and occasionally comes to meals in suits so wrinkled I think the only way he could have rumpled them so was if he’d slept in them.  I have watched him night after night eat entire apples with a knife and fork, not once touching them fully by hand, and paring the skin away so thickly that only small portions of the inner flesh remain. An anti-papist, he says Italians, too, could care less about going to church, but everyone in Europe is in thrall to the Pope.  His Italian seems wonderfully energetic, though much too clipped, but the years in Italy have done crazy things to the accents of his native tongue.  Imagine the most exaggerated English accent you can, complete with squared-off face, mouth pulled tightly downward at the corners—bull-doggish, Churchill-style—and double it. “No one would dare offend the Pope,” he says.  The word “offend” lingers and glides down on the “n” until it suddenly swoops down to the “d” which bites off the glide so vigorously that it becomes another syllable: like, “No one would dare offennnnnnnnnn-da the Pope,” the last two words delivered lightly after a lyrical pause.  “It’s a kind of exaggerated actor’s English,” says Janet Macam, Vincent House’s resident Aussie, a crossword puzzle addict delighted that her name is a palindrome.  (That’s her in the large picture above directly across from Rochfort.)  But I was going to say before this excursion on Torquillian English that he fears most the proposal, already partly realized, of a European police force.  If England becomes too contrary, he feels it will just be invaded.

A September 30th London Times article by home affairs correspondent Philip Johnston, reports that,  “Protestors will accuse Tony Blair of treason today to highlight the perceived threat to British sovereignty posed by the forthcoming European Union summit in Nice…A ‘notice of treason’—naming Mr Blair, Robin Cook, the Foreign Secretary, Jack Straw, the Home Secretary, and Lord Williams of Mostyn, the Attorney-General—is to be handed in at courts across the country.”

And it’s not just Blair.  “If the Queen signs anything coming out of Nice,” Torquil says, “she should be brought up on sedition charges herself!”  And it’s not just the EU.  Many people here believe that at no other time in history has British sovereignty lain so much in the balance.  Or even the concept of Britishness itself.

My assertion in an earlier remembrance that the British needed to talk more about race caused some consternation here (see Part 1 of this series).  Yet on October 11th, while I was back in Chicagoland for a night before flying on to San Francisco, a 400-page report on multiculturalism in Britain was released under the auspices of Home Secretary Jack Straw.  “The word ‘British’ is racist–report” reads a headline in the Evening Standard, and in The Independent this headline: “Britishness is racially coded idea, Straw told.”  The headlines seem intemperate for a nation not used to thinking this way.  There are recommendations to revise and rewrite the histories used in schools to include both the contributions of minorities as well as the oppression visited upon them by “the British.”  There’s a quiet uproar over this in London, as you can imagine, the quietness due in part to how deeply this hits the British psyche, and in part because there’s so much else to be in an uproar about.  “We should not engage in flagellation over our glorious past,” said Gerald Howarth, a Conservative member of the Home Affairs Select Committee.  “I for one am proud of our imperial heritage.”  In Naperville one of the results of the diversity plan I helped put together for District 203 is that diversity is now one of the nine civic virtues at the center of the social studies curriculum.  [See brochure of this plan.]  Because people at Vincent House know a little of my work back home, there is often an uneasy silence when conversations begin touching these issues.  The silence just never lasts that long. 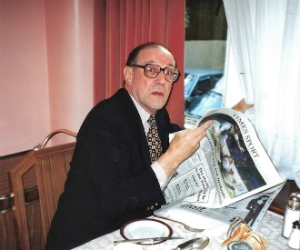 “What are you people up to at Table 17?!” demanded Robert Wyle, Vincent House’s manager.  He slapped down the paper containing Johnston’s article, which specifically identifies Torquill not only as one of those bringing treason charges—but also as a resident of Vincent House!  As he strode away indignantly I thought I heard him mumbling under his breath what he’d said to me many times: “Richard, I don’t run Vincent House.  Vincent House runs me.”

♦ Go to the Lead Post in my Remembering London series.

One Response to Remembering London – Part 5: Fear the “Urine”