Linda and I in Monet’s bedroom, Giverny, France.

I returned to the United States in mid-December 2000 after a semester teaching abroad.  I left a cold, drizzling London to land in ice-bound, 10-below-zero Chicago.  Linda and I had planned to go straight to Brookfield Zoo to catch its annual Christmas lights display, but the weather drove us straight home to begin being together again and start reliving the many things we were privileged to do during the couple of weeks we spent together not only in London but in France.  I had wanted her so badly to experience London’s riot of flowers and feared that it would have calmed by mid-October, the earliest she could come visit.  It had, though London still bloomed magnificently, and in Monet’s garden in Giverny, France, which we had wanted to visit together for years, flowers still exploded with the reds, oranges, blues and yellows of Fall.  Roses still climbed overhead on trellises; nasturtiums still choked the Grand Allee, the path leading to the front door of Claude Monet’s house. 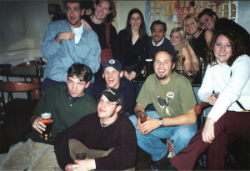 My Jazz and Culture class. We listened all over London.

Even before our time together, I was already in reminiscence mode and had gotten the idea that I should bind excerpts from my letters and journals into a booklet and give them out to certain people as a remembrance of my time in London.  Also, before I left Naperville, Illinois, Prof. Jack Shindler, a colleague of mine at North Central College and head of International Programs there, asked if I wouldn’t send back occasional writings for possible publication somewhere.  Journal entries thus began to take on more formal shapes in my mind even before I landed and had written a single word.  One result has been this web series I have titled “Remembering London.”  Only a month in to my stay, I began this epilogue.

Marietta (standing), head of the dining room, her arms on the Thompsons. Richard is now head of Vincent House.

By then, late September, I knew that the shapes already taking place in my mind might not allow the mentioning of so many events that happened between late August and mid-December. There was the missile launched at the eighth floor of the MI-6 building which houses British spy operations—“a kind of super CIA,” our guide Deborah called it as our tour bus went by it on September 27th on our way to Canterbury and Dover Castle.  Deborah was hilarious.  A droll, sarcastic wit, she was amazed at how quickly they had fixed the hole the missile made.  I’m afraid she too, like many Londoners I met, loved disparaging the French.  She delighted in telling us how the English slaughtered them with the long bow and warned us to be careful to give the “V” for victory sign with our palms out.  To incapacitate the dreaded long bowmen for good, enemies like the French would chop off their first and middle fingers, such that the “V” with backhand out came to be a defiant English gesture—”See, we still got two fingers to slaughter you with!”  The backhand-out V came to mean much the same as a similar, more contemporary gesture with only one finger up.

Some of the many international students living at Vincent House. The picture below shows some who served as maids for room, board, and a small stipend.

Then there was the sinking of the Greek ferry where 66 people lost their lives.  There were the shootings at the Dome of the Rock in Jerusalem and the fighting that by early October had already taken 70 lives.  Several times in early October Islamic protestors lined stretches of Kensington High Street just south of Kensington Palace chanting as angrily, as defiantly, as any crowd I had ever experienced.  “We will never give up Jerusalem!”  “Israeli ‘Security’ police are murderers!”  “No peace with Israel.”  On one occasion, they had erected 15-foot poles, teepee-like, nearly in the middle of the street, lodging one of their number at the top with a bullhorn.  The justly infamous London traffic snarled even more, and more yet when a string of paddy wagons came to take the tee-pee sitter and others away.  Perhaps most of all, there was the downfall of Slobadan Milosovic, the Slob we all called him at Vincent House.

More personally, I began to feel the pieces I would write wouldn’t allow me to spend as much time as I wanted on all the Londoners I met, especially at Vincent House.*  The moment I began describing Vincent House to Linda, she said, “You’ve wound up at Fawlty Towers!”  I remember hearing the name of this BBC comedy, though didn’t remember ever seeing an episode.  A short description of the premise, however—a hotel filled with eccentrics, run by a lunatic manager (Basil) always scrapping with his wife (Sybil)—proved somewhat accurate. 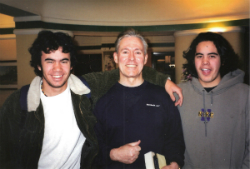 Peter Knowles flanked by my sons Daniel (on left), and the late Bryan Guzman (1985-2006). Peter no longer lives at Vincent House.

However, Robert Wyle, Vincent House’s manager wasn’t lunatic at all, mostly just harried, once saying to me, “If I ever get called Basil, or my wife gets called Sybil again, we’ll scream!”  Now that I’ve seen a few episodes the resemblances are both clearer and not, especially because the people at Vincent House are so vividly real, not just comic characters.  Funny, eccentric, regularly outlandish—they are some of the most engaging humans I have ever met.  When I last saw Robert Wyle on a later trip to England, he was about to retire from Vincent House.  “Richard,” he said as Linda and I were checking out, “It’s been so nice to see you again, and before you leave I just want to say…sincerely…Pay the bill and leave the key.”

Most of my family came to visit, along with Rob Ridenour, a friend of Aaron and Kari’s.  Rick wrote his adventures to Desiree, whom he had just begun dating.  And we brought over our best friend Deanna Petersohn.  All in all, these visits were highlights of my stay, topped perhaps only by getting to know all the people I did at Vincent House.  I began this epilogue in late September 2000 mainly because by then I was already missing them.

* Earlier parts of this series feature many Vincent House denizens:  Marietta (pictured above) in Part 3: Fear of Pigeons…and Churches.  Rochfort Young and Peter Knowles in Part 1: Petrol and Race, and Rochfort, Peter, and Robert Wiles in Part 5: Fear the Urine.

√ Go to the Lead Post of Remembering London for links to all series episodes.