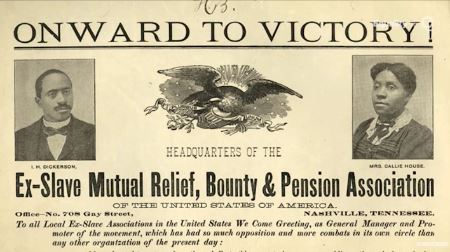 The VIDEO below is a 7:07 minute edit of a 15:21 report from Bloomberg News in its Quicktakes series.  The episode is “History Has Been Made: Reparations Are Here,” highlighting one of the more controversial topics of the day.  The controversy is evidenced by the comments left by those who’ve watched the full episode on YouTube (follow link above).  Of the 80,287 views so far, 1.8k approve but 1.7k disapprove. The disapprovals are particularly instructive, running virtually the full gamut from picking at the exact figures to broader issues like reparations feeding into “victim mentality.”  There are several forms of the “my ancestors didn’t own slaves” argument, including some inversions, like asking why England and the African tribes that sold their own people into slavery aren’t also being held accountable.  And, of course, slippery slope arguments: what next, is Italy going to have to pay reparations because of the Roman Empire?

Some objections are important, and some contain elements of truth, and it’s important to note, as the report does, that 70% of blacks support reparations for slavery—which means that 30% don’t, and the report does show, briefly, some blacks arguing against it.  Support, though, seems to be growing even among whites, and President Biden does support a bill proposing to study the idea of reparations.  “Let’s see where it takes us,” he’s said. 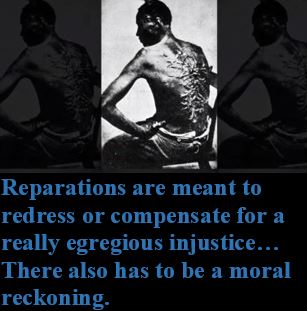 The first large movement demanding reparations for slavery occurred in the 1890’s.  It was led by Callie House (on the right in the graphic above), an ex-slave, who founded the National Ex-Slave Mutual Relief, Bounty & Pension Association. At its peak the association had over 300,000 dues-paying members.  The government’s response was to accuse her of mail fraud, of which she was convicted by an all-white jury, and spent a year in jail for.  There have been reparations paid in the past: to Native Americans, for example, though that record has been infamously negative and spotty from the beginning.  In 1988 President Reagan signed the Civil Liberties Act, which provided $20,000 of reparations to the surviving detainees of the Japanese American internment camps.  In 1995 Florida began paying reparations to descendants of the Rosewood massacre which began on January 1, 1923.  And, as the Bloomberg reports points out, it was quite normal and non-controversial to pay reparations to slave owners who lost slaves for whatever reason.  Reparations mainly become controversial when the proposed recipients are black.  Most objections simply ignore, or are woefully unaware, of the overwhelming presence of discriminations against American Blacks that continue in full force every single day in virtually every aspect of American life.

The Video below focuses on the most recent move towards reparations in the city of Evanston, IL.  On November 25, 2019, it passed a resolution by Alderwoman Robin Rue Simmons establishing a fund and program of reparations, providing up to $25,000 to around 16 families to help them build wealth through home equity by either buying or improving property.  Lack of good home ownership is the single greatest driver of this nation’s astonishing wealth gap and even more astonishing racial wealth gap.  Evanston’s effort is a modest step.  We should note, too, that this amount is only $5,000 more than what Japanese Americans who had been interned received—a fact amplified when we consider that $20k in 1988 is worth $45k today.  A conservative estimate of the debt we owe Black Americans for their unpaid labor is $20.3 trillion (see video below), and according to a recent Citi Corp Study racism continues to cost us big:  well over $16 trillion lost in just the last 20 years, again conservatively estimated.

“Americans have been punched in the face with its racism,” says Simmons, and that’s one reason support for reparations is growing, though many, many Americans have suddenly become skillful boxers who can dodge that punch.  A growing number, however, are also beginning to come to terms with how horrifying American racism has been and continues to be.  It’s been called the most oppressive system of slavery that’s ever existed.  “In 1928—five years before he came to power and over a decade before the outbreak of World War II,” writes Lynn Burnett, “Hitler praised the United States for establishing its dominance through the genocide of Native Americans.”  Then as preparation for the Holocaust, Hitler turned to studying American race law as a model for constructing his own.  Several Nazi intellectuals who led the study had stunned initial reactions: they felt Americans had gone overboard in legally segregating its black population.* Moreover, racism is still part of the “romance” of America, a significant part of the nation still living the myth of the “Lost Cause” of the Civil War.  In Germany there are zero monuments to the Nazis, but in the U.S. over 1800 monuments and memorials to the Confederacy.

Systemic racism—upheld and nourished by lots of legal, cultural, and financial infrastructure—has been absolutely relentless in denying blacks equal opportunity in America.   It needs repeating that in most instances that targeting remains as forceful, and often more so, today.  Note, for example, the avalanche of new and newly-proposed voting laws clearly aimed at restricting black voters, all these laws disguised in the name of reducing voter fraud, though there is no credible evidence that significant fraud exists.**  More Americans than ever before may actually be beginning to understand the entrenched power of systemic racism, and that, too, is making them take another look at reparations.  “We are entering an era of repair,” says Simmons.  We can only hope she’s even a little bit right.

____________________
* The first consolidated study of the influence of American race law on Hitler’s Germany was 2017’s Hitler’s American Model: The United States and the Making of Nazi Race Law by James Q. Whitman, the American lawyer and Ford Foundation Professor of Comparative and Foreign Law at Yale. Read the transcript of Whitman’s interview with Bill Moyers.