Posted on December 3, 2014 by Richard Guzman 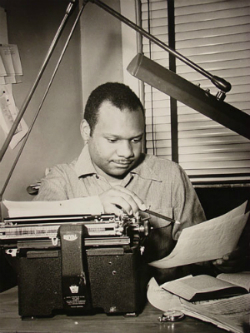 Today most people would recognize Richard Durham (1917-1984) as the author of The Greatest, the autobiography of Muhammad Ali.  He also worked to analyze the Black Press in Chicago for the Illinois Writer’s Project in the ‘30’s, wrote a column for the Chicago Defender in the 40’s, and between 1948 and 1950 was the script writer behind the ground breaking radio series Destination Freedom produced at Chicago’s WMAQ.  Premiering on June 27, 1948, the show eventually ran to 91 different scripts dramatizing the lives of famous blacks, including Crispus Attucks, Frederick Douglass, Joe Louis, Ida B. Wells, Gwendolyn Brooks, Jean-Baptiste Pointe DuSable, Buddy Bolden, Nat King Cole, Louis Armstrong, and more.   From the so-called Golden Age of Radio and for decades afterward, blacks had been casted as maids, butlers, assorted buffoons, and the like, roles which played heavily on the most insulting stereotypes of African Americans.  In contrast, Durham characterized the blacks  he focused on as “rebellious, biting, scornful, angry, cocky…not forever humble, meek….”  They managed to succeed despite racism, and they changed American culture.   “Nowhere else in radio history,” writes J. Fred McDonald, “did a single series, written by a single talent over as long a period, project such a strident reminder of liberties denied and rights abused.”  It always began something like this:

In my book Black Writing from Chicago, I included an excerpt  from one of my favorite Destination Freedom scripts, “Premonition of the Panther,” about the great boxer Sugar Ray Robinson, born Walker Smith.  Focusing more on the inner turmoil of his subject, Durham deals less directly with black history and social issues than in his other scripts.  Yet the excerpt makes clear that Durham wants us to ponder important questions:  What is Robinson’s price? Who really owns him?—questions deeply echoing the slave past.  The drama opens with Robinson dreaming he has knocked out and killed his next opponent, a kid named Doyle.  His trainer, Gainsford, shakes him out of his nightmare and talk turns to whether Robinson will make weight.  He starts jumping rope and the rope’s rhythm takes him on a flashback recounting his rise to fame.  For a brief moment, his mother, Mrs. Smith, wanted her graceful son to be a dancer.  There’s too much violence and brutality in the world, she says, and she especially wants him to stay away from the big bully boxer boy next door.  That bully turns out to be Joe Louis.  He can’t, of course, and one night after Robinson watches Louis knock someone out, Louis gives him his gym bag, a symbolic mantle of boxing greatness. Robinson begins his career, but hides it from his Mom.  I began the excerpt just after he comes home with $3,000 made in boxing and tells his Mom to send back all the laundry she does for others.  She is furious.  She knows he’s been boxing.  He says he likes it and has seen Joe Louis and their boyhood idol Henry Armstrong “pulling in a night what no poor man makes in a lifetime.”  Mrs. Smith remains defiant.  After his Mom throws him out, Robinson, on Gainsford’s suggestion, goes to meet “the Tycoon,” his first big patron.  It’s there the question “Who owns him?” takes center ring. 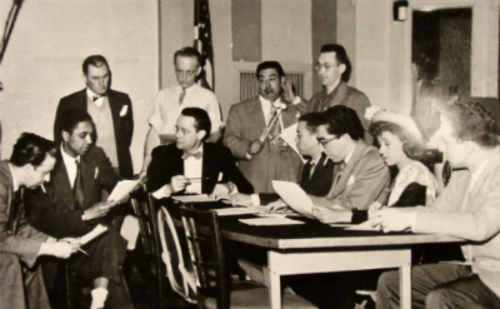 ♦ For a WTTW Feature on Richard Durham and Destination Freedom go to: http://www.wttw.com/main.taf?p=76,4,5,3

♦ Read an extended appreciation of Durham with many details on Destination Freedom by J. Fred McDonald at: http://www.jfredmacdonald.com/rddf/essay.htm

♦ Go to a List of Black Writers written about on this site.