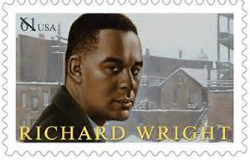 Constantly criticized for being too ideological, too sociological, too sensational, and controversial for both the bluntness of his literary style, as well as the directness with which he confronted racism and injustice, Richard Wright (1908-1960) nonetheless became a towering figure of American letters.  His impact on the way we view issues of race, class, and the inhumanities still haunting us today remains virtually unparalleled.

Mississippi-born, Wright moved to Chicago in the 1920’s, and much of his work—including his monumental Native Son (1940)—is set against the city’s backdrop.  His outrage over racism and his concern for its socio-economic consequences led him to join the Communist Party.  His early writings thus appeared in small, mostly left-wing publications like the magazine New Masses, but after 1938, when he won a prize for four short stories from Story magazine, most of his major work acquired landmark status, including those four stories published that same year as Uncle Tom’s Children, Native Son, of course, 12 Million Black Voices: A Folk History of the Negro in the United States (1941), Black Boy (1944), and The Outsider (1953).  12 Million Black Voices caused the FBI to monitor him for the rest of his life. 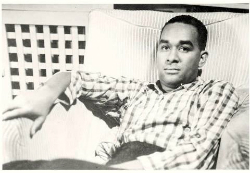 Much of Wright’s work revealed not only the terrifying depth of racial hatred, but also the prying, condescending, and ultimately damaging nature of a white liberalism supposedly on the side of the oppressed.  From 1947 on he lived a kind of self-exile in France, where, among writers like Sartre and de Beauvoir, he produced The Outsider, considered by some to be the first consciously existential novel written by an American.  His relationship to those French intellectuals, as well as to both American and African blacks in France was, however, criticized by James Baldwin in his eulogistic essay “Alas, Poor Richard.”  Years earlier, in his famous essay “Many Thousands Gone,” Baldwin had also criticized Native Son and Wright’s creation of its main character, Bigger Thomas.  Having, as we alluded to above, endured much criticism already, such assaults seemed like the deepest betrayals from someone he considered his literary son. 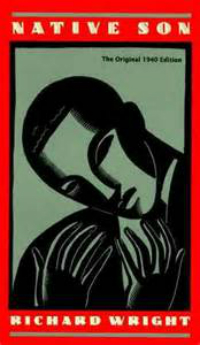 In 1944 the Book-of-the-Month Club, which had helped make Native Son a national sensation—it sold over 200,000 copies in less than three weeks—said it would accept only the first part of Wright’s massive autobiography American Hunger.  Wright renamed that first part Black Boy.  The second part, retaining the name American Hunger, would not be published until 1977.  However, in 1944 the Atlantic Monthly published an excerpt of American Hunger in two parts (in August and September).  In my book Black Writing from Chicago, I included a shortened version of this original Atlantic piece with my summaries of the omitted parts.  It chronicles that crucial 1933 to 1937 period in Wright’s life, where he is publishing his first work and laying the foundations for nearly all his major work to come.  Among the works mentioned or alluded to in the original essay are the “crude” revolutionary poem “I Have Seen Black Hands,” his first piece of journalism, “Joe Louis Uncovers Dynamite” (about black Chicago’s reaction to the Louis-Baer fight), and “Big Boy Leaves Home,” which would become one of the four stories in Uncle Tom’s Children.  What dominates the narrative, however, is his relationship to the Communist Party.

It was strained nearly from the beginning.  “I felt that Communists could not possibly have a sincere interest in Negroes,” he writes.  “I was cynical and I would rather have heard a white man say that he hated Negroes, which I could have readily believed….”  After a short-lived infatuation, Wright began seeing how the Party handed down “decisions” regardless of what its local members felt.   It also attempted to control personal freedoms, especially the freedom of artists and writers, and he himself was labelled “a smuggler of reaction,” a “bastard intellectual,” an “incipient Trotskyite.”  “It was claimed,” says Wright, “that I possessed an ‘anti-leadership attitude’ and that I was manifesting ‘seraphim tendencies’—a phrase meaning that one has withdrawn from the struggle of life and considers oneself infallible.”  I ended the excerpts I had strung together for Black Writing from Chicago with Wright watching the Communist Party go by in Chicago’s May Day parade.  He especially regards the blacks marching with them and writes that, “…an objectivity of vision was being born within me.  A surging sweep of many odds and ends came together and formed an attitude, a perspective.  ‘They’re blind,’ I said to myself.  ‘Their enemies have blinded them with too much oppression.’”  A new determination to continue writing was also born.  “I would hurl words into this darkness,” says Wright, “and wait for an echo; and if an echo sounded, no matter how faintly, I would send other words to tell, to march, to fight, to create a sense of the hunger for life that gnaws in us all, to keep alive in our hearts a sense of the inexpressibly human.”

This piece represented Wright’s public break with the Party, a break which had actually occurred nearly seven years earlier.   When it appeared, New Masses, the site of so many of his early works, denounced him.

♦  Go to a list of Black Writers written about on this site.
♦  Go to the lead post on James Baldwin.
♦  Go to Black Writing from Chicago, and to the Teaching Diversity main page.